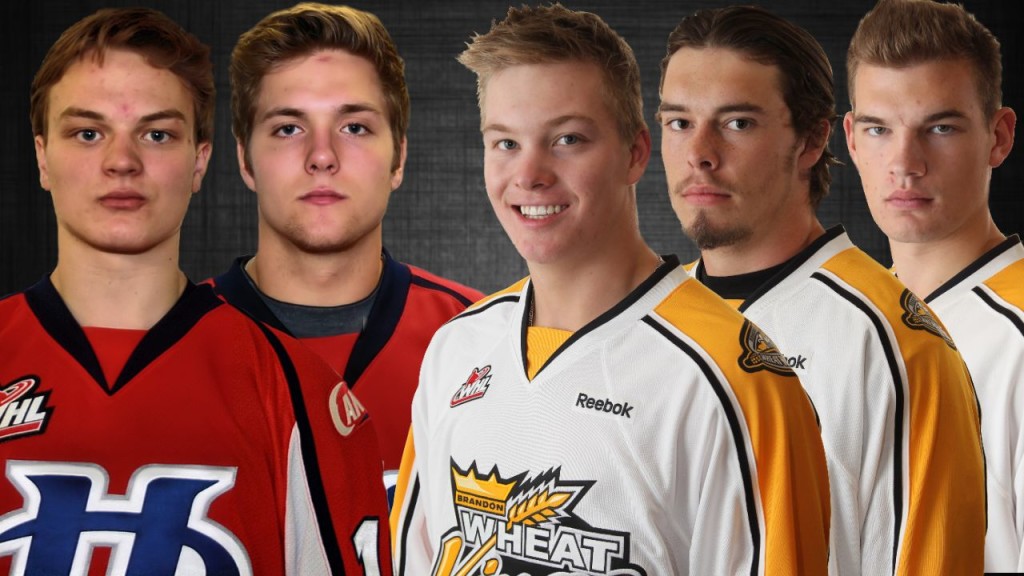 Brandon, MB. — The Brandon Wheat Kings and Lethbridge Hurricanes have completed their second Western Hockey League blockbuster deal in less than a year.

Wheat Kings general manager and head coach Kelly McCrimmon has announced that the club has acquired veterans Reid Duke and Macoy Erkamps as well as the playing rights to forward Tak Anholt in exchange for defenceman Kord Pankewicz and forwards Brett Kitt and Ryley Lindgren.

A sixth round draft choice (169th overall) of the National Hockey League’s Minnesota Wild in 2014, the 5’11” 190 lb Duke is in his third full WHL season. An 18-year old Calgary product, Duke scored fifteen goals and 40 points in 61 games last season and in 132 career games he has scored 25 goals and 70 points.

Duke was the fifth player chosen in the 2011 WHL Bantam Draft.

Erkamps, a 19-year old Delta B.C. product, is a former second round bantam draft pick (27th overall) in 2010 and in 201 career games the 6′ 202 lb defenceman has scored 86 points, including fourteen goals while accumulating 210 minutes in penalties.

Anholt meanwhile was the Hurricanes’ second selection (30th overall) in last year’s bantam draft. In 33 games with the Vancouver AAA Midget Giants in 2013-14, he had twelve goals and 21 points in 33 games. He is currently playing at Yale Hockey Academy in B.C.

“This is a major trade for our hockey club,” says McCrimmon. “In Reid Duke, we are adding a tremendously talented forward with an excellent pedigree potential. Macoy is an experienced two-way defenceman and is right-handed which fills a void on our team.”

A former first round pick (11th overall) of the Wheat Kings in 2011, Pankewicz is in his third season in Brandon and has scored one goal and 15 points in 88 career games.

Lindgren and Kitt meanwhile are in their second WHL seasons. An 18-year old native of East St. Paul, Manitoba, Lindgren scored nine goals and 17 points in 67 games last season while the Brandon born Kitt had five goals and ten points in 37 games for the Wheat Kings in 2013-14.

Both were chosen by Brandon in the fifth round of the 2011 bantam draft.

“As is the case with trades of this magnitude, we are losing three real good young players who have been very good Wheat Kings,” McCrimmon went on to say. “We wish them the best with the Hurricanes.”

Erkamps and Duke are expected to arrive in Brandon this week and will be in the lineup Friday night when the Wheat Kings play host to the visiting Tri-City Americans.

In November 2013, the Wheat Kings dealt Taylor Cooper and Nick Walters to the Hurricanes in exchange for defenceman Ryan Pilon and the rights to Colt Conrad.

Tickets to the game are on sale now at the Keystone Centre box office, by calling 726-3555 or online at keystonecentre.com