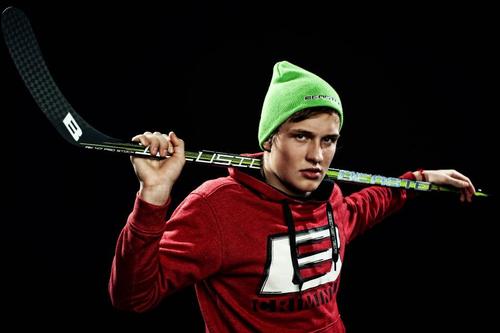 Bukarts was selected 9th overall in the 2012 KHL Junior Draft by the Dinamo Riga, becoming the highest drafted Latvian in KHL history, 4 spots higher than his brother Roberts Bukarts in 2009. As well, he participated at the 2012 and 2013 World U18 Championships as well as last year’s IIHF World Junior Championships, scoring once and setting up another in six games.

“Rihards is a talented player,” says Wheat Kings’ general manager Kelly McCrimmon. “We feel that he’ll be a contributer on this year’s club.”

With today’s selection, Bukarts becomes the highest import ever drafted by Brandon as well as being the first ever Latvian born player. Prior to Wednesday, defenceman Ole-Kristian Tollefsen had been. The Norwegian, who was later chosen by the Columbus Blue Jackets in the National Hockey League Entry Draft, was picked 9th overall in 2002.

Brandon’s other import this coming season will be 18-year old Richard Nejezchleb from the Czech Republic, who was chosen 35th overall last June. The 6’2″ 190 lb right-winger scored eleven goals and 23 points in 34 games for the Wheat Kings in 2012-13.

Canadian Hockey League clubs are permitted to carry a maximum of two imports on their roster.

The Vancouver Giants had the number one pick in Wednesday’s draft and used it to select Russian defenceman Kmitry Osipov. With the fourth overall selection, the Prince George Cougars took David Soltes of Slovakia.

The CHL Import Draft will continue throughout the day.

Today’s Import Draft caps a busy week for the WHL club and follows on the heels of Sunday’s National Hockey League Entry Draft as well as as the unveiling of their 2013-14 regular season schedule.