McCORRISTER LOOKING TO MAKE AN IMPRESSION 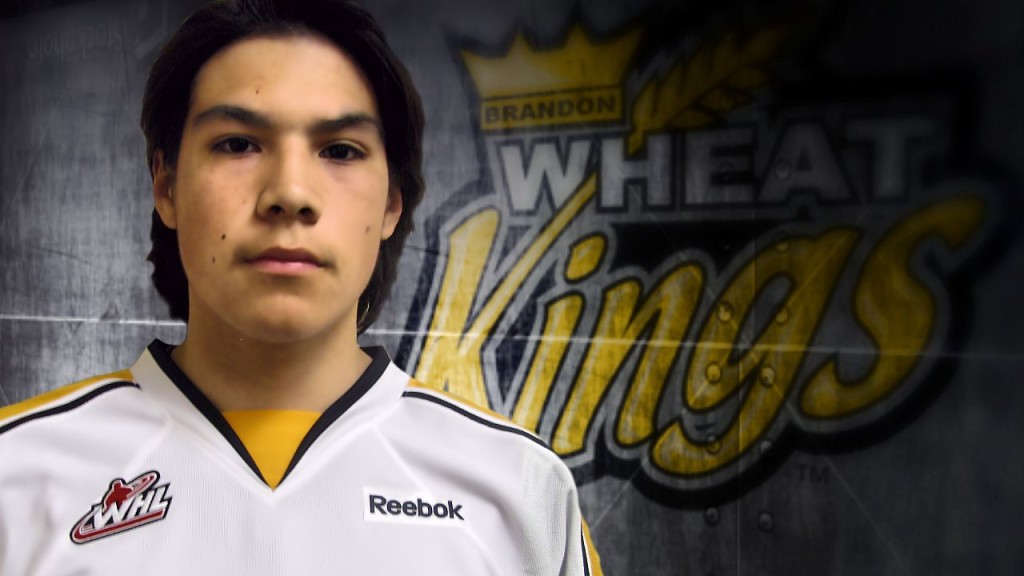 Linden McCorrister has been riding his bike a lot lately.

A 2013 draft pick of the Brandon Wheat Kings (seventh round, 135th overall), McCorrister needed to raise a little money to go to training camp. So he and Wyatt Bear, his teammate on Manitoba’s 2014 Provincial Aboriginal team that finished fourth at the National Aboriginal Hockey Championship in Kahnawake, Que., decided to go on a marathon bike ride around and through the Interlake to raise funds for their first WHL training camp. Bear has to go all the way out to Seattle (fifth round, 102nd overall in the 2014 WHL bantam, draft), so he needed even more dough than his teammate.

LindenMcCorrister_Vert_500“The kids were out raising money because it’s going to cost them a lot to go to training camp,” said Team Manitoba coach Dale Bear. “Good for them. This is important to them and they’re working hard.”

McCorrister, 16, will have a tough battle trying to crack the lineup of the Wheat Kings while Bear is too young, at 15, to play in the WHL anyway. Bear has been working with this week with the provincial under-16 team, a team McCorrister played for last season.

Doug Sinclair, the head coach of Manitoba’s 2013 under-16 provincial team, remembers clearly why he kept McCorrister ahead of some young centremen who put up bigger numbers in the Manitoba Midget Triple A League.

“When we were building the team, we had a lot of centremen,” said Sinclair candidly. “Linden was with us as a depth guy. We knew we were going to have to move some centremen to the wings, but we wanted to keep Linden in the middle. He plays hard, he checks hard and he’s very responsible.

“We used Linden to shut down (WHL No. 1 draft pick Tyler) Benson. We needed a physical centreman who would check. Linden fit the bill.”

McCorrister, who began his hockey career at Peguis First Nation and still makes Peguis his home today, might not have been the best player in the Manitoba Triple A Midget Hockey League last season, but he’s probably the best third or fourth-line checking centre in the province.

And that’s exactly what Sinclair was looking for when he put together the team that would represent Manitoba at the 2013 Western Canada Under-16 Challenge Cup last November.

The Western Canada Challenge Cup was held at Father David Bauer Arena in Calgary and Team Manitoba finished a surprising 2-2 and won the bronze medal against teams from British Columbia, Alberta and Saskatchewan. The team was just one goal away from beating Team B.C. to lock up a silver medal.

For Sinclair, who had three superstar centres in Nolan Patrick, Dylan Thiessen and Tanner Kaspick, having McCorrister in the lineup was exactly what he needed. He was looking for a responsible, checking centre who could down the opposition’s top player and that’s what he got out of this 5-foot-10, 160-pound 15-year-old.

“He killed penalties for us and was really responsible and played hard in the defensive zone. Some people questioned keeping Linden. Some people thought there were more skilled players and there probably was. But we needed a defensive centre and I have no regrets about taking him on the trip.”

McCorrister began playing the game as a five-year-old at Peguis. When he was “about eight,” he and his family realized that he might have a future in the game. That’s when he started to move up.

Now he’s a member of the Interlake Lightning of the Manitoba Triple A Midget Hockey League where he finished the 2013-14 season with 12 goals and nine assists in 37 games.

As a member of Sinclair’s under-16 provincial Program of Excellence team last year, McCorrister believes he took some significant strides as a player.

“I really liked the program because it was so structured,” he said. “I was also excited to travel to Calgary with the team.

“I’ve had a good year. Going to spring camp with the (Brandon) Wheat Kings was really good, too. I learned a lot while I was there. I’ve had a good learning experience this year.”

Sinclair, who had four centremen on the provincial team who had all been drafted in the WHL bantam draft by the Wheat Kings, said that McCorrister was one of his most dedicated and “engaging” players.

“He’s a really physical player and, honestly, he really worked his way into our lineup,” said the head coach. “His coachability is amazing. He was one of those rare kids who always turned and looked you in the eye on the bench. He would come off the ice and ask good questions. I like that. I like it when a kid is interested in the game and dedicated to making himself better. He’s really an engaging kid and he’s great to coach.

“In Game 3 of the tournament, he hurt his thumb and he never complained. He just went out and worked harder. Never said a word about his injury, just tried to play as well as he possibly could. I was really impressed with him.”

No doubt that will please McCorrister, who wants to take the game of hockey as far as he possibly can. Not only has he been drafted by the Wheat Kings, but also by the Swan Valley Stampeders of the Manitoba Junior Hockey League. It’s likely he’ll start the 2014-15 season with Swan Valley.

“I really want to play hockey for a long time and see how far I can take it,” he said. “In two years, my plan is to make Brandon and this coming year I want to play in Swan Valley or somewhere in the MJHL. Right now, my goal is to play for the Wheat Kings in two years.”

Provincial coach Doug Sinclair is one guy who believes Linden McCorrister has the heart and talent to make it.