MATTHEOS EXCITED TO BE HERE 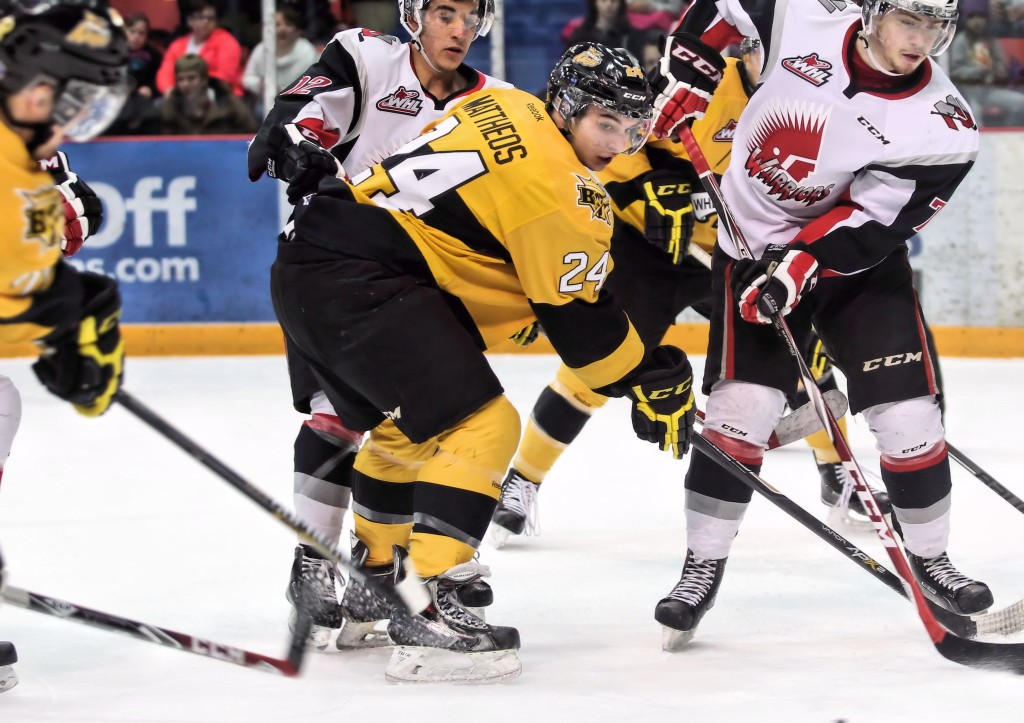 (Courtesy of Perry Bergson, The Brandon Sun) — For Stelio Mattheos, simply skating on the ice for his first shift as a Brandon Wheat King on Saturday was a huge thrill.

Little did he know that a bigger milestone lay ahead.

The highly touted Winnipeg forward, chosen first overall by the Wheat Kings in the 2014 Bantam Draft, drove in with his parents and two siblings to make his WHL debut against the Moose Jaw Warriors last Saturday.

He immediately noticed a big difference between AAA Midget and major junior hockey.

“It’s a lot bigger guys and the game is a lot faster, physically and mentally,” Mattheos said. “It was an adjustment for sure, but I felt like I got more used to it as the game went on. I just tried to work my hardest.”

The 6-foot-2, 187-pound forward scored 14 goals and added 11 assists in 27 games with the Winnipeg Wild, who were going for their fourth straight Manitoba AAA Midget Hockey League title, but it wasn’t the season he imagined.

Mattheos battled injuries throughout the year, costing him a chance to play in the Canada Winter Games and in the playoffs with the Wild.

“We did really well in the regular season, but in the playoffs we had some bad luck with injuries and it costs us,” Mattheos said. “Overall, we didn’t get the result that we wanted. It was difficult.”

The Wild were swept in three games by the Pembina Valley Hawks in the league semifinals.

Mattheos said he hasn’t spent much time in Brandon since being drafted, but has watched many of the games on the Internet, adding that he was always impressed by what he saw.

On Saturday, he pulled into Brandon around 3 p.m. for what would prove to be a 9-2 drubbing of the Warriors in front of the largest crowd of the season at Westman Place.

“It was an awesome feeling just to get on the ice,” Mattheos said. “The place was electric, just great vibes.”

A moment he’ll never forget came at 5:10 of the third period when he skated out from the corner and fired a bad angle shot, which deflected in front through the legs of Warriors goalie Brody Willms.

“I was pretty surprised when it went in,” Mattheos said. “I was lucky enough to play with Mark (Matsuba) and Tyler (Coulter) and they really helped me out with my first game. They were each helping me out when I needed it, like when I made a mistake or if I could do something better.”

It’s undecided how long Mattheos will stick around with the Wheat Kings, although he remains here this week. The 15-year-old, who put up 103 points in 32 games with the Winnipeg Monarchs Bantam AAA team in 2013-14, wants to be in the lineup for sure next fall.

“It’s going to be a summer of work and getting ready for the upcoming season and just getting as ready as I possibly can,” he said.