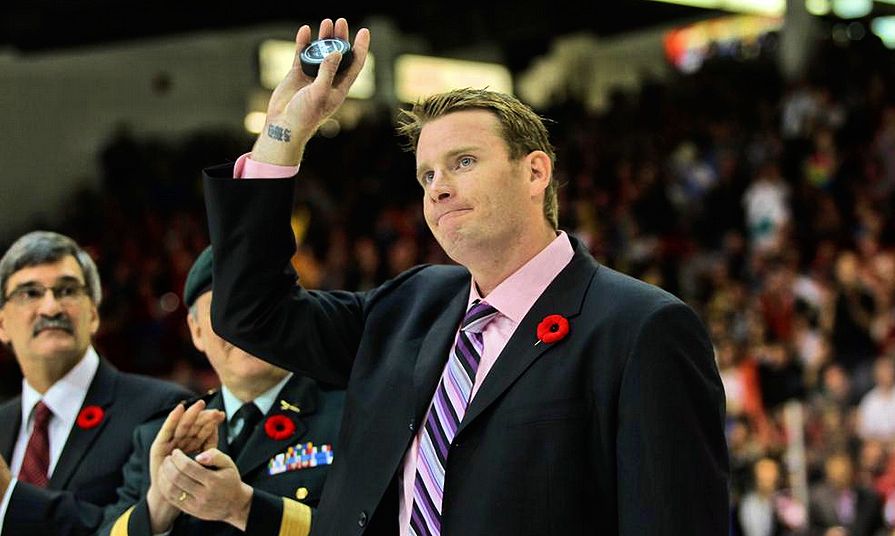 The popular forward, who captained the Brandon Wheat Kings to the Western Hockey League championship in 1995-96, discovered at the Memorial Cup in Brandon in 2010 that he had nothing to worry about. When he dropped the puck at a ceremonial faceoff before one of the games, he received a lengthy standing ovation.

“It was pretty cool. I almost started crying,” Dingman said. “It was pretty nice that people remembered and people still cared and valued what I did for that team. I’m very proud of my time there and what we were able to do. I developed not only as a player but also a person.”

Dingman said he was happy to visit with other former Wheat Kings and coach and general manager Kelly McCrimmon that spring in Brandon.

One of the players he hung out with was Jordin Tootoo, who played with the Wheat Kings after Dingman left. But they did have something in common: The No. 22.

“We had a good conversation about wearing the same number and who was the better player wearing number 22 for the Wheat Kings and if they were to retire the number who’s name would go on it,” Dingman chuckled. “We had a little fun with that.”

Now a colour analyst on the Tampa Bay Lightning’s television crew, he still follows the Wheat Kings a bit, chatting with his former billets and teammates from time to time.

Dingman was actually drafted in 1991 by the Seattle Thunderbirds but came to the Wheat Kings in a deadline deal for Chris Osgood before playing a game there. In 240 WHL regular-season and playoff games from 1992 to 1996, Dingman had 101 goals, 127 assists and 383 penalty minutes, playing on successive Memorial Cup teams that included players such as Marty Murray, Wade Redden, Darren Ritchie, Bobby Brown and Peter Schaefer.

After being selected in the first round of the National Hockey League draft in 1994 by the Calgary Flames, Dingman spent six full seasons and two partial seasons in the NHL and played in Europe from 2006 to 2008 before retiring. Dingman played 437 regular-season and playoff NHL games with the Flames, Colorado Avalanche, Carolina Hurricanes and Tampa Lightning. He had 17 goals, 24 assists and 869 penalty minutes, winning the Stanley Cup in 2001 in Colorado and in 2004 with Tampa Bay.

Dingman thinks that maybe the fact that he was a first round pick has shaded his view of the time he spent in the NHL. He’s proud of what he accomplished during his career, but wonders if he might have done more if things worked out differently.

“It seemed like every time I had a good year I would get traded or something would happen,” he said. “I guess that’s the nature of the game but I just always wanted to do more and I thought that I could do more, but for whatever reason … maybe I just wasn’t in the right situation.

He now runs a youth hockey program in the Tampa, Fla., area, where he lives, coaching his six- and eight-year-old sons.

“I think they’re better skaters already than I ever was so hopefully that’s promising for them,” he said with a laugh.

He contacted the Lightning after he retired to see if they might have a role for him and started doing radio shows. He was then put on the team’s television broadcasts as a colour analyst, gradually boosting the number of games he did each season. It’s a role he’s enjoyed as the team prepares to host the Chicago Blackhawks tonight to open the Stanley Cup final.

“When you’re young you don’t have any idea. You think that you’re going to play in the NHL and then retire and just play golf and do whatever,” Dingman chuckled. “I’ve been lucky to do what I’ve done. You just always try to do more and better yourself and that’s what I try and do … You never know what’s going to happen. You just have to keep a positive attitude and work hard.”