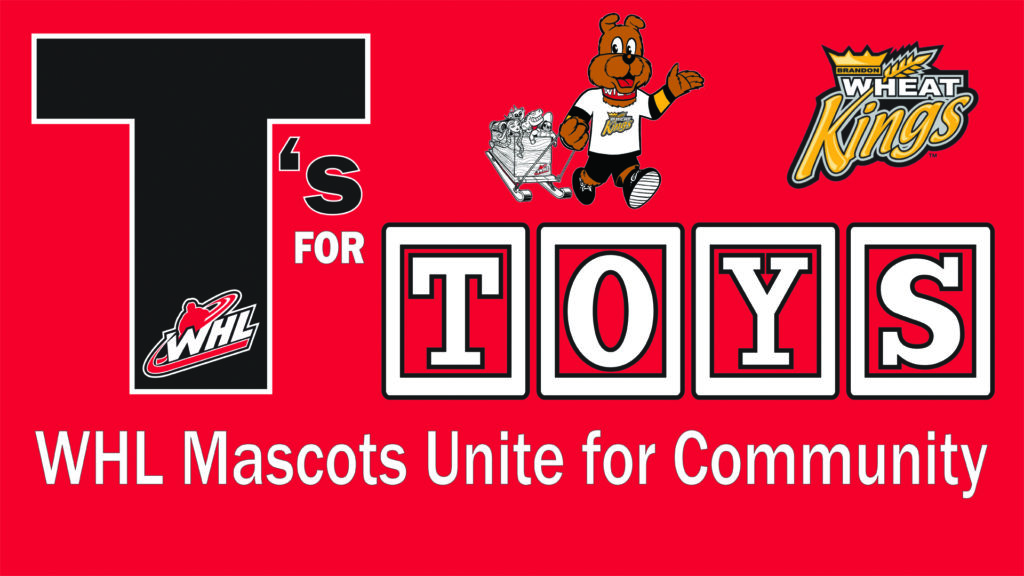 Calgary, Alta. – The Western Hockey League and its 22 member Clubs are proud to launch the inaugural WHL T’s For Toys Campaign. Mascots from across the WHL have united to raise funds throughout Western Canada and the Pacific Northwest United States to ensure as many children as possible receive toys during the holiday season.

The WHL T’s For Toys Campaign will give Wheat Kings fans an opportunity to purchase, limited-edition WHL Club T-Shirts featuring Willie, the official mascot of the Wheat Kings! This program marks the first time the 22 WHL mascots have joined forces to benefit children in their communities.

T-Shirts will be available for purchase online at a cost of $20 (CAD) and available in adult and youth sizes. $7.00 (CAD) from each T-Shirt sold will go directly to a local charity in the home community of the mascot depicted on the T-Shirt purchased. The proceeds will be donated to community charities to purchase toys for local children in need.

Each WHL Club has partnered with a local charity to support the WHL T’s For Toys Campaign, which will run through December 11.

For more information on WHL T’s For Toys, visit WHL.ca/tsfortoys. To purchase your very own WHL mascot T-Shirts, please visit: https://whl.entripyshirts.com/ts-for-toys. Let’s give children something to smile about.

Regarded as the world’s finest development league for junior hockey players, the Western Hockey League (WHL) head office is based in Calgary, Alberta. The WHL consists of 22 member Clubs with 17 located in Western Canada and five in the U.S. Pacific Northwest. A member of the Canadian Hockey League, the WHL has been a leading supplier of talent for the National Hockey League for over 50 years. The WHL is also the leading provider of hockey scholarships with over 350 graduates each year receiving WHL Scholarships to pursue a post-secondary education of their choice. Each season, WHL players also form the nucleus of Canada’s National Junior Hockey Team.