WHEAT KINGS WERE THE BEST IN THE WEST – 1979 WHL FINAL 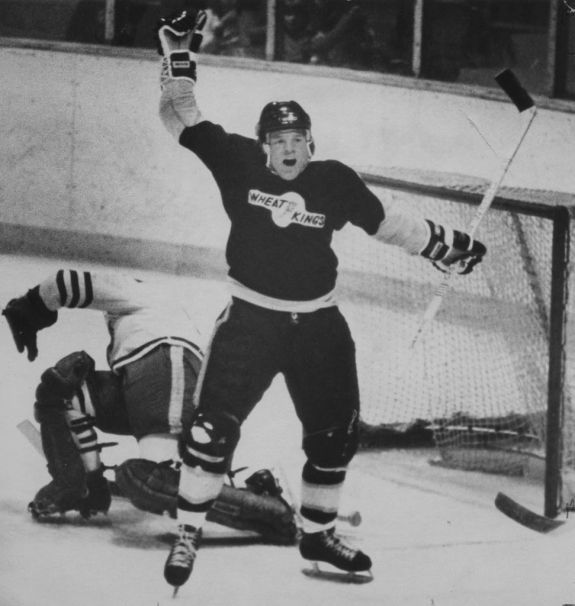 Portland, Oregon – Brandon Wheat Kings spent 29 frustrating seasons chasing the elusive trail of a rainbow that always shook them sometime before it touched down at the Promised Land, which is to say the Memorial Cup.

But there was no shaking the Wheat Kings here Thursday night. They saw red and them homed in on it.

With Portland defenceman Blake Wesley serving a major penalty for high sticking Ray Allison in the face, the Wheat Kings scored three powerplay goals that provided the impetus for a 6-3 victory over the Winter Hawks.

The Wheat Kings victory, coming before 7,569 fans at the Memorial Coliseum, gave them the Western Hockey League’s championship and a berth in next week’s Memorial Cup. Brandon won the best of seven series 4-2 and its first trip to the Memorial Cup since the 1948-49 season when the Wheat Kings were beaten by the Montreal Royals.

Wheat Kings will arrive at Brandon’s Keystone Centre this afternoon before departing for Montreal and the Memorial Cup – their version of Heaven – on Saturday or Sunday.

As far as the Winter Hawks are concerned, heaven can wait. It has to.

The Wheat Kings made sure of that after Wesley was sent off for bloodying Allison early in the final period. The Winter Hawks, who who got a powerplay goal from David Babych 42 seconds into the period, held a 3-1 lead at the time.

“He caught me full across the lips,” Allison said later in the bedlam that was the Wheat Kings’ dressing room. “They sure burned for awhile.”

So, with his lips burning, Allison began the burning of the Winter Hawks.

“The end result just goes to show the guts we have on this team,” said Brandon coach Dunc McCallum. “We wanted to come out fast in the third period, but they scored that early goal. We had to overcome it and we did.”

The Wheat Kings also had to overcome at least one close call. After McCrimmon put the visitors ahead, the Winter Hawks swarmed to the puck and actually put the puck behind Brandon netminder Rick Knickle.

But referee Terry Gregson, a National Hockey League trainee assigned to the series, waved the goal off. His whistley had already stopped play.

The Wheat Kings had taken a 1-0 first period lead when Propp shoveled a shot underneath Hunter with just three seconds remaining on the clock. Winter Hawks, however, took a 2-1 second period lead on goals by seldom used Don Keller and Tim Tookey, who found the range while Brandon’s Dave McDonald was looking on from the penalty box.

The final Brandon goal came from Brent Kiessig on a perfectly executed three on two break with Dave Stewart and Alllison.

Gregson handed the Wheat Kings six of 10 minor penalties, while the Winter Hawks took two of three majors. Don Gillen of the Wheat Kings and Jim Dobson both sat out for five minutes after they tangled in the first period.

For the second game in succession, Knickle outplayed Hunter in the goaltending battle. Knickle, beaten for two powerplay goals, turned aside 30 shots and was particularly sharp in the first period when the Winter Hawks had an edge in play.

Hunter, on the other hand, was just mediocre with a 33-save performance.

The Wheat Kings, as they had done in their 4-3 overtime win on Wednesday, concentrated on shooting low at Hunter.

And that’s not easy to do when you’re busy tracking a rainbow.