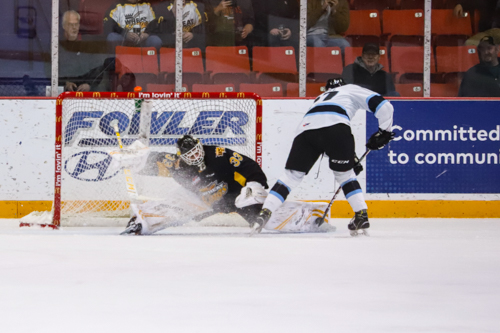 Brandon, MB. – The Battle of Manitoba continued Friday night at Westoba Place with the Brandon Wheat Kings kicking off a weekend home and home series by downing the visiting Winnipeg ICE 7-4 at Westoba Place.

Cole Reinhardt scored three times and set up two others as the Wheat Kings bounced back from another slow start to beat their provincial rivals for the third time in four games against one another this season.

Two of Reinhardt’s goals came in a span of four minutes – during the second half of the third period – as the Wheat Kings improved to 12-14-1-0 on the season.

Connor Gutenberg, Ridly Greig, Lynden McCallum and Marcus Sekundiak, who snapped a 4-4 tie with his third period goal, rounded out the scoring for the Wheat Kings, who will be going for the weekend sweep Saturday night in Winnipeg.

“I just thought I was skating well and the puck was going in too,” Reinhardt told Perry Bergson of the Brandon Sun following the game. “I had a couple of good chances, but it’s whatever I can do to help the team.”

In what has been a common theme in recent games, the Wheat Kings got off to a poor start on Friday, getting outshot 13-5 in the opening period and trailing 2-1 through twenty minutes.

Reinhardt’s first goal evened the score in the second however and Brandon assistant coach Don MacGillivray says that was definitely a turning point in this one.

“We were on our heels and they were taking the play to us,” MacGillivray said. “We didn’t get pucks behind their defence at all or establish a forecheck. We spent a lot of the first period in our own zone and turned a lot of pucks over, but I thought we got going a little bit by getting a couple of goals.”

Netminder Jiri Patera, who has played all four games against the ICE this season, turned aside 36 shots to pick up the win.

Thanks to the seven goal outburst against Winnipeg, fans in attendance can receive 50% off their online pizza orders at Dominos on Saturday, fans can save 6 cents a litre off their next fill at Heritage Co-op on Saturday and they will also have seven days to receive a $7 discount off any dinner buffet at Aaltos in the Canad Inns.

Following Saturday’s game in Winnipeg, the Wheat Kings will return home to host the Swift Current Broncos on Tuesday night.

The game, which is the first of six home games in December – including four before Christmas – is another “2 for Tuesday” at Westoba Place.

What that means is specials on Keystone Centre concessions as well as a “free’ ticket when you purchase one at the regular price. Brandon will then close out the week with a game against the visiting Kamloops Blazers on Friday night in a game presented by Princess Auto.

The box office reopens Saturday but fans can also order online at keystonecentre.com or by calling (204) 726-3555.