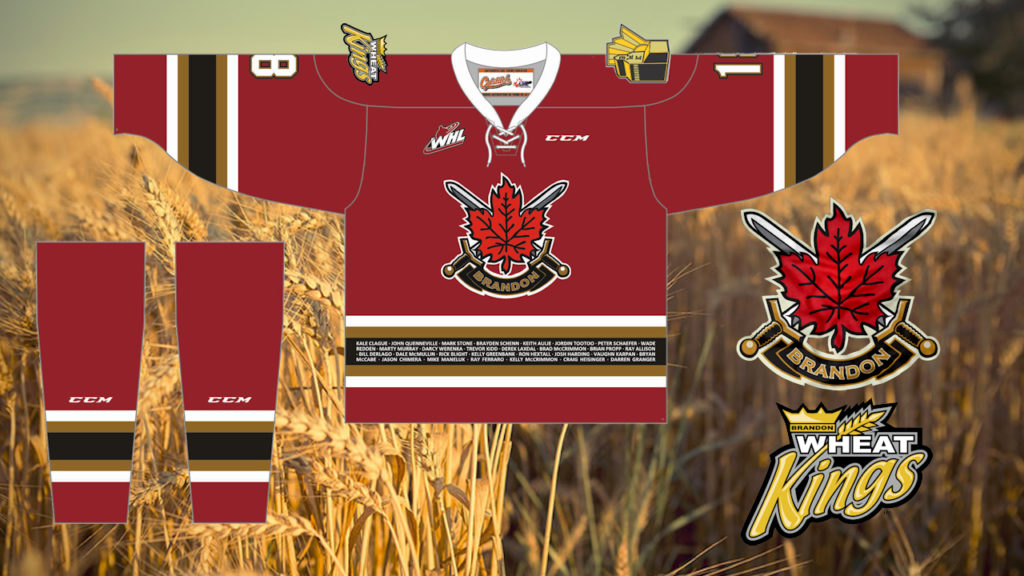 Brandon, MB. – The Western Hockey League’s Brandon Wheat Kings have teamed up with the Brandon Regional Health Centre Foundation and the Western Manitoba Cancer Care Centre in raising both awareness and proceeds for our community during a special game in early February.

On Friday, February 9th the Wheat Kings will take to the ice in a special Team Canada jersey to face the visiting Saskatoon Blades at Westman Communications Group Place.

The jerseys, which will be predominantly red, will feature a special Maple Leaf logo that was worn by the hockey club during the opening game of the 2010 MasterCard Memorial Cup, played in Brandon. The Wheat Kings traditional crown logo will be displayed as one of the two shoulder patches on the sweater along with a unique grain elevator logo featuring a prairie sunrise.

In addition, the jersey trim along the waist will feature names of former Wheat King players and staff that have represented Canada at the World Junior Hockey Championships, the World Cup and World Championships as well as the Winter Olympic Games.

Among the names that will be featured include 2-time gold medal winners Trevor Kidd, Marty Murray and Wade Redden.

Among the staff members is Brandon’s current owner and former general manager Kelly McCrimmon, who is the current Assistant GM of the National Hockey League’s newest entry, the Vegas Golden Knights.

Most of the jerseys will be auctioned off throughout the game, with proceeds going to the Brandon Regional Health Centre Foundation for the Western Manitoba Cancer Centre. Fans can place a reserve bid in advance of the game by calling the Foundation office at (204) 578-4227. The deadline for placing a pre-game reserve bid is 4:30pm game day.

One of the jerseys meanwhile, to be worn that night by captain James Shearer, will be made available to the highest bidder during a radio auction on Q Country 91.5 FM radio from 9-10am February 9th. Fans will be encouraged to call into the radio station at (204) 725-2525 during the hour long auction.

“With the Winter Olympics scheduled to start that day, it seems only fitting that the Wheat Kings would wear the Maple Leaf on their jersey for this game,” says Wheat Kings’ Director of Business Operations and Sponsorship Rick Dillabough. “We’re excited to take part because it is an excellent way for the hockey club and its many fans to give back to the community that has supported us so well.”

In addition to the in game auction, the BRHC Foundation will be selling $5 raffle tickets for another Wheat Kings team signed jersey. Tickets are available by calling the Foundation office at (204) 578-4227, by contacting the Foundation at info@brhcfoundation.ca or by attending the game between the Wheat Kings and Blades. That jersey will be given away during the third period of play.

February’s game will be the third and final special theme jersey night to be hosted by the Wheat Kings during the 2017-18 campaign and will be featured during the opening day of the Winter Olympic Games in Seoul, South Korea. In October, the Wheat Kings wore special “Don Cherry” style jerseys in support of the Kidney Foundation of Canada and in December, it was “Star Wars” jerseys in support of The MS Society.

During the first two games of this season’s theme jersey series, well over $30,000 has been raised for local charities.

The BRHC Foundation’s mission is to raise funds to support healthcare needs in the regional community. The Foundation relies on donations from individuals, organizations and businesses, as well as monies raised through fundraising initiatives. All money raised in Brandon stays in Brandon to benefit the patients served at the Brandon Regional Health Centre.