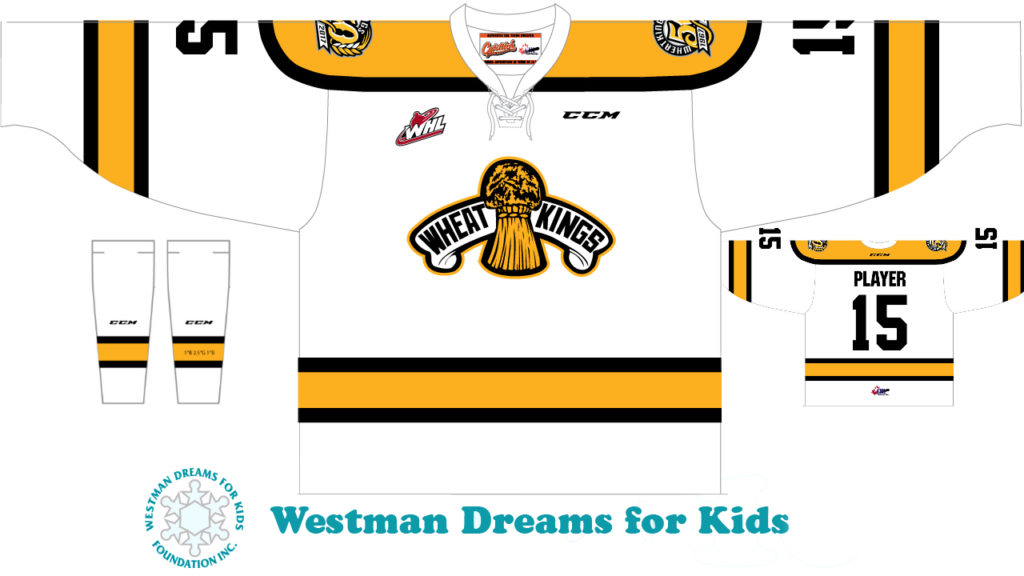 Brandon, MB. — Western Manitoba hockey fans will have a chance to step back in time next month when the Brandon Wheat Kings play host to the Everett Silvertips on Friday, February 10th.

The defending Western Hockey League Champions, in association with the Westman Dreams for Kids Foundation, have announced plans for the second of three Special Theme jerseys for the 2016-17 regular season.

In what will be the Silvertips first appearance in Brandon in over two years, the Wheat Kings will take to the ice wearing the original white jerseys, worn by the Wheat Kings when they joined the Western Canada Hockey League in 1967.

The specially designed jerseys pay homage to the history of the Wheat Kings, who are celebrating their 50th Anniversary in the WHL this season.

Originally referred to as the Canadian Major Junior Hockey League, the WCHL was formed in 1966 as an attempt to get the provincial junior leagues in Western Canada playing under one umbrella. The League began with seven teams situated in Calgary, Edmonton, Estevan, Moose Jaw, Regina, Saskatoon and Weyburn. Within a year, however, the WCHL grew as four new teams – Swift Current, Flin Flon, Winnipeg and the Wheat Kings were added to the mix in 1967.

The ’67-68 Wheat Kings finished the regular season with a record of 21-33-6-0 and wound up losing to the Moose Jaw Canucks in an 8-game Quarterfinal series, that featured one tied game.

Brandon featured such players as goalkeeper Ted Temple, defenceman Terry Marshall and forwards Ray Brownlee, Jack Borotsik and Jack Wells during that first season and the jerseys were a staple in Brandon until the early seventies. Others to wear the traditional jersey in the late sixties and early seventies include the likes of Ron Chipperfield, Robbie Neale and Dwayne Pentland.

The primary color of the February 10th jersey will be white with black piping and gold trim. The main crest has a retro feel, resembling the Wheat Kings original logo of the 1940’s. The color scheme of the threads is simple and classic and features the traditional retro jersey lacing.

The game-worn jerseys will be auctioned off during a silent auction throughout the game against the ‘tips as well as a radio auction on 94.7 Star FM.  As well, fans will have the opportunity to bid on special theme jerseys, featuring the names and numbers of Borotsik, Brownlee and Temple.

Proceeds from the sale of the jerseys will go to Westman Dreams for Kids.

“Westman Dreams for Kids is honored to be one of the charities the Wheat Kings have chosen for their 50th Anniversary Special Theme jerseys,” says Foundation President Verna Lenton. “Having the opportunity to feature the ‘inaugural jersey’ was a bonus.”

“The Wheat Kings have been a longtime supporter of Westman Dreams for Kids and we are very grateful,” she went on to say. “Thank you Wheat Kings and congratulations on your 50th Anniversary.”

“Westman Dreams for Kids has been a great partner of the Wheat Kings over the years and by teaming up with them on this historic 60’s theme jersey, we give our fans a great mix of nostalgia and support for a great cause,” says Brandon general manager Grant Armstrong. “February 10th will no doubt be an exciting night for western Manitoba hockey fans of all ages.”

February’s game will be the second of three special theme jersey nights to be hosted by the Wheat Kings this season. In November, the Wheat Kings worn their 90’s theme jerseys in support of the Brandon and District United Way and in March, the Wheat Kings will be donning the popular jerseys from fifteen years ago – made famous by such stars as Jordin Tootoo, Ryan Craig and Eric Fehr. Proceeds from the sale of those jerseys will go to the Ashley Neufeld Softball Complex.

Supported by 880 CKLQ and 94.7 Star FM, two the jerseys will be available during two radio auctions. Meyer Nell’s number 20 jersey will be up for bidding from 8-10am on 94.7 Star FM while Tyler Coulter’s number 21 will be auctioned off during CKLQ’s broadcast from Swift Current on Saturday, February 4th.

On the ice meanwhile, the Wheat Kings continue preparations for what will be a 3-game Alberta road trip this weekend.

The road trip will begin against the Tigers in Medicine Hat on Saturday night.