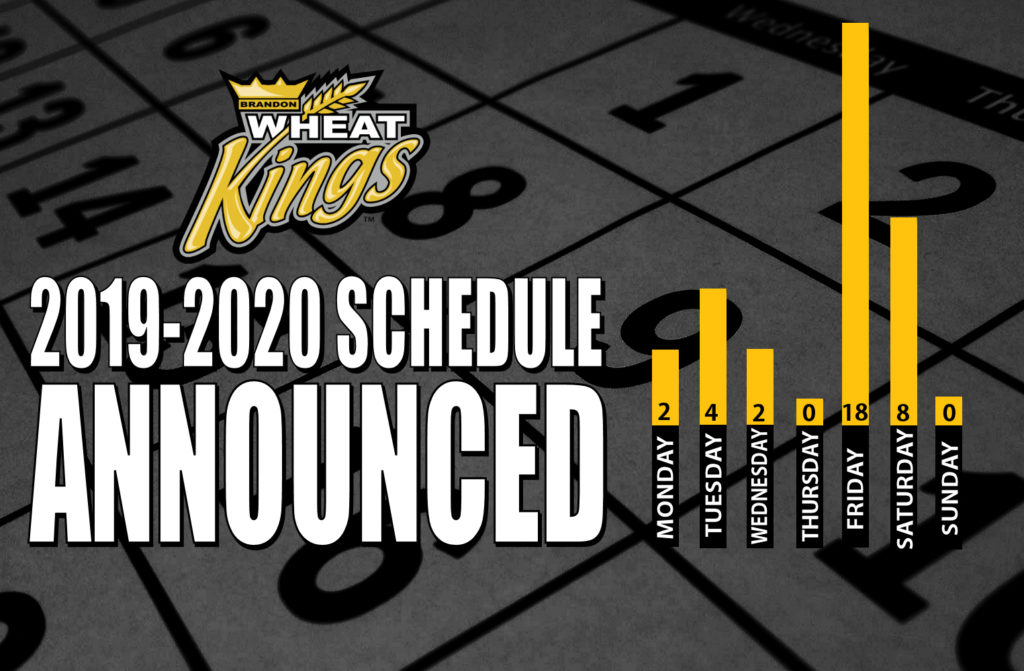 Brandon, Manitoba – The Brandon Wheat Kings, in association with the Western Hockey League have unveiled their 2019-20 regular season schedule and for the first time in over thirty years they will open up with a home and home series with a provincial rival.

The schedule will begin with a home and home series with the league’s newest entry, the Winnipeg ICE, beginning with the hockey club’s Home Opener on Friday, September 20th. The two teams will then face off the following night in Winnipeg.

The last time Brandon faced off against a Winnipeg club to bring the curtain up on the regular season was the fall of 1984 when the Wheat Kings travelled to Winnipeg to meet the Warriors on September 30th, before hosting the back half of the home and home weekend series on Sunday, October 2nd.

Of Brandon’s thirty-four (34) regular season home games, twenty-eight (28) games will be played on weekends and holidays.

Rounding out the home schedule will be four Tuesdays and two Wednesday night games.

Overall, the hockey club could not be happier with the new schedule.

“First and foremost, weekends are certainly the most popular for families throughout western Manitoba,” says Wheat Kings’ Director of Business Operations Rick Dillabough. “Anytime you get in front of families, that’s important, so getting as many as we did this year should prove beneficial to western Manitoba hockey fans.”

“Add to that a list of exciting promotions and we’re looking forward to what should be a very entertaining year at Westoba Place,” he went on to say.

The Wheat Kings will bring the curtain down on the 2019-20 regular season with a home an home series with the Winnipeg Ice, including Saturday, March 21st at Westoba Place.

Brandon will play their provincial rival Ice ten times this season, including three home and home series. In addition to the opening and closing weekends, Winnipeg and the Wheat Kings will face off on December 27th (Brandon) and 28th (Winnipeg).

As for the rest of the Eastern Division, Brandon will play Regina, Saskatoon, Prince Albert and Moose Jaw a total of six games this year (three at home and three away).

Western Manitoba hockey fans will have the opportunity to see the WHL’s five B,C, based clubs this coming season.

Meanwhile the Wheat Kings will travel to the Pacific Northwest for its annual west coast road trip in October, beginning Wednesday, October 16th against the Silvertips in Everett. In addition to the ‘Tips, Brandon will play in Seattle, Portland, Tri-Cities and Spokane, before making stops in Lethbridge and Swift Current to face two Central Division clubs to cap off the 2-week trip.

Some other observations of this year’s schedule include the following;

–  Brandon plays two home games in September, three in October, seven in November, six more in December, seven in January, four during the month of February and five during the final month of regular season play in March.

–  Wheat Kings will close out their pre-Christmas schedule with a game against the Ice in Winnipeg on Tuesday, December 17th.

–  The Wheat Kings’ Sportsman’s Dinner will be held on Thursday, February 6th. The annual Scholarship Foundation event will be followed by games on Friday, February 7th against the visiting Medicine Hat Tigers.

–  Brandon will host two games over the Christmas break – Thursday, December 27th against Winnipeg and Monday, December 30th against the Regina Pats.

–  The Wheat Kings longest home stand of the season will be five games in December, which includes the Christmas break, four more in January and four in March.

–  The club’s Annual Remembrance Day game will be played at 2:30pm on Monday, November 11th against visiting Winnipeg Ice.

The Wheat Kings  will open up training camp in late August and will play four pre-season games, including two on home ice (September 6th and 14th).