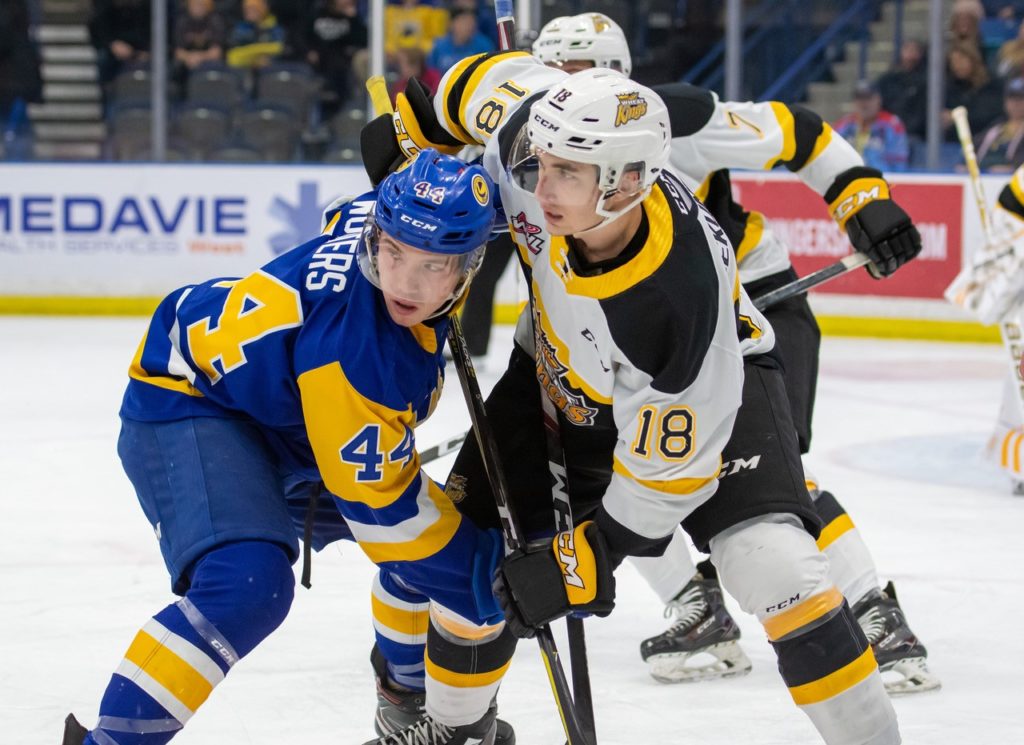 Saskatoon, SK. –  It will be a battle for third place in the Western Hockey League’s Eastern Division tonight when the Brandon Wheat Kings travel to Saskatoon for the opening game of a home and home series with the Blades.

The Wheat Kings and Blades are currently tied for third with 59 points each, with Brandon holding one game in hand.

While the winner tonight will take over sole possession of third place, they will also cut into the lead of the two division leaders – Winnipeg and Prince Albert.

The Raiders currently sit on top of the division with 65 points, two up on the second place ICE.

The loser of the game meanwhile will slip into the second and final wild card spot in the Eastern Conference.

Rookie forward Jake Chiasson is excited to get this critical series underway and put Saturday night’s disappointing overtime loss to Medicine Hat out of their mind.

“We’re into February now and the message is playoffs,” Chiasson recently told Perry Bergson of the Brandon Sun. “When it comes down to it, every point matters and it’s not even the points, it’s the habits that matter a lot too. We can’t be giving up goals like that in the playoffs but to have this learning curve now will get us cemented in for playoffs.”

Chiasson was one of two Brandon goal scorers against the Tigers on the weekend, giving the former first round bantam draft choice four goals and 11 points in 48 games this season.

Luka Burzan and Ben McCartney currently sit 1-2 when it comes to club scoring with 53 and 52 points respectively. Burzan, who scored a career high 40 goals last season, leads the Wheat Kings with 30 this year with seventeen regular season games to play.

“I think I’ve been playing with a lot more confidence lately, carrying the puck more and shooting a lot more,” Robins told the Brandon Sun earlier this week. “I’m not throwing the puck off my stick if I don’t have something, just holding on to it a little longer and looking for plays that might not be there for a second but show up a few seconds later. I’m not forcing things, just slowing the game down a little bit for myself.”

Tickets to Friday’s game, which is a presentation of Guild Insurance and HMS Insurance, are on sale at the Keystone Centre box office, by calling (204) 726-3555 or online at keystonecentre.com

The first 2,500 fans through the door Friday night will receive a full sheet of 2019-20 Wheat Kings’ player cards.