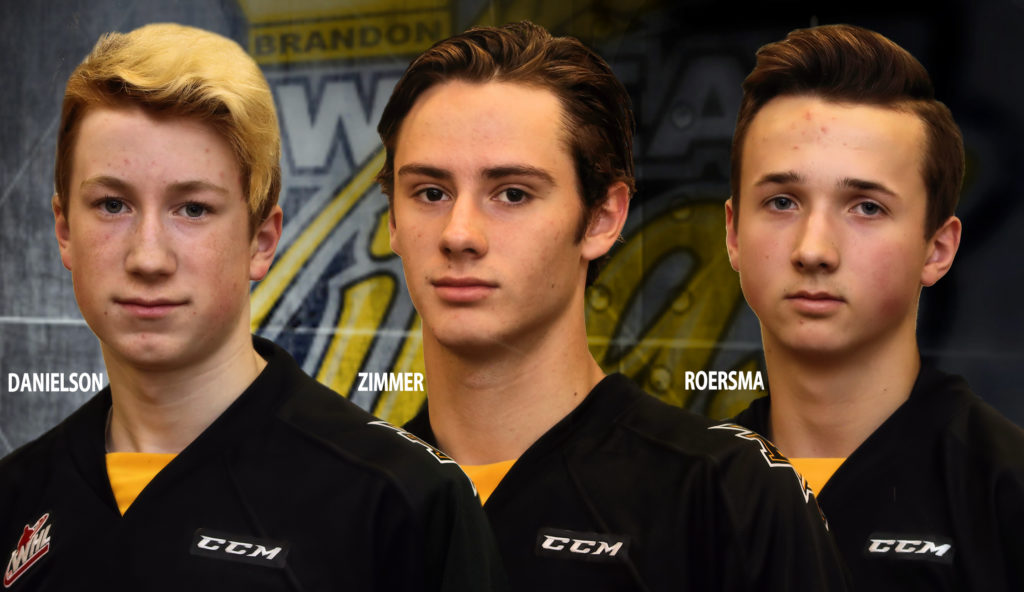 Brandon, MB. – With the hockey club’s Prospects Camp behind us and training camp three months away, the Brandon Wheat Kings are pleased to announce the signings of their three first round picks in this year’s Western Hockey League Bantam Draft.

Wheat Kings’ Director of Scouting Darren Ritchie says that Red Deer’s Nate Danielson, Tyson Zimmer of Russell and Rylen Roersma of Raymond, Alberta, who were chosen 5th, 6th and 16th overall, have committed to the club.

“We’re very excited to have Nate, Tyson and Rylen along with their families join our organization,” says Ritchie. “We believe these three players will play a big role on some very good teams in the future. We look forward to seeing these players grow up in our organization together.”

A 6’ 160 lb. forward, Danielson scored 26 goals and 59 points in 29 games for the Red Deer AAA Bantams during the 2018-19 regular season.  Danielson was named the AMBHL’s Top Forward and the Most Valuable Player at seasons end.

“He’s a real skilled guy, who plays with pace,” says Ritchie. “He sees the ice really well and makes something happen every shift.”

“Tyson has a great release and is a really strong skater,” says Ritchie. “He’s always looking to shoot the puck when he has the chance.”

Roersma meanwhile scored 23 goals and 44 points in 29 games for the Lethbridge Bantam AAA this past season and Ritchie is impressed with the 5’10” 168 lb forward’s 2-way game. Roersma was also one of three players awarded the Most Valuable Player in the AMBHL this past season.

“Rylen is really quick…really smooth. He has great hands and is responsible at both ends of the ice.”