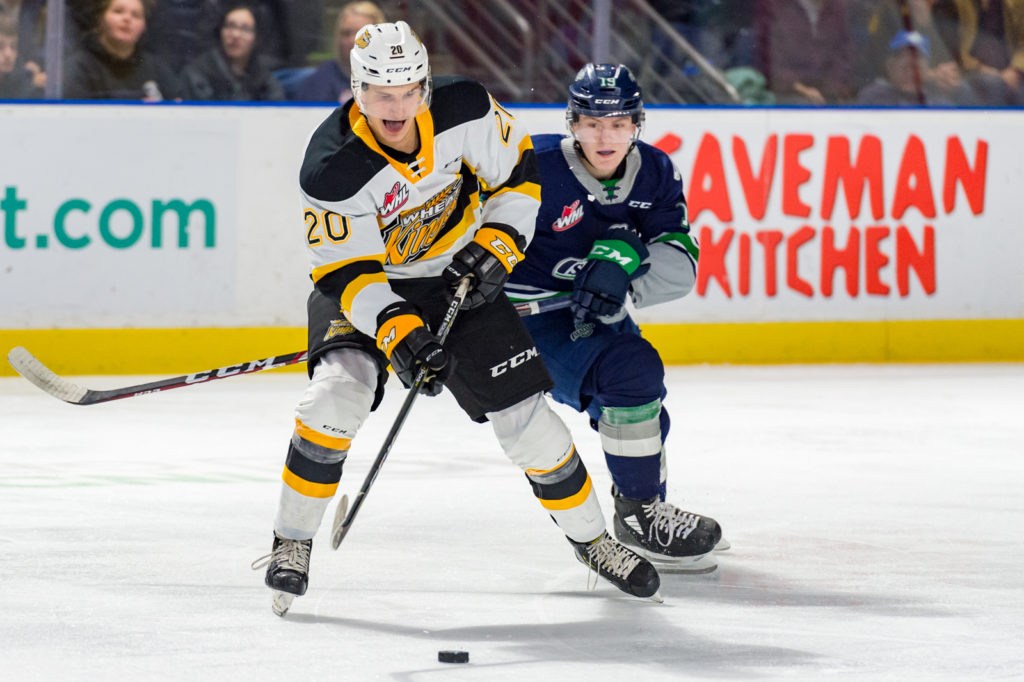 (Courtesy of Branden Crowe, Q Country Sports) — The Brandon Wheat Kings came back from down 2-0 to earn their first win of the US Division road trip, 3-2 over Seattle on Friday night.

Cole Reinhardt had two goals including the game-winner as the Wheat Kings snapped a mini two-game losing skid and improved to 4-6-0-0 on the season.

Seattle took a 2-0 lead early in the third period on Matthew Wedman’s 2nd of the evening, putting the Wheat Kings behind the 8-ball, but a pair of quick PP goals would put Brandon back on the comeback trail.

“For us to have some push back in the third period, down 2-0 with under ten minutes to go it shows a lot of the growth and the character in our room,” said Head Coach Dave Lowry. “We did a lot of really good things tonight and it was nice to see the guys rewarded for it.”

Lynden McCallum and Cole Reinhardt scored five minutes apart midway through the third period to tie the game up. Both goals came on the man advantage. Brandon finished 2/6 on the night.

“The energy on our bench tonight was the best it’s been all year,” added Lowry. “Our older guys did a really good job of setting the tone and we had great contributions from our young guys. I liked the way our group all stayed with it tonight.”

Ethan Kruger made 27 saves, earning his first victory of the season. A win that had eluded him through four starts leading into Friday’s game.

“Ethan has given us an opportunity to win hockey games every time he starts,” added Lowry. “We haven’t scored enough goals for him. We aren’t worried about his wins and losses we evaluate him on his performance and he’s done everything he can to get us a win.”

The Wheat Kings will head to Portland for a date with the Winterhawks tomorrow. Portland was off tonight and have a 5-3-0-1 record coming into play vs Brandon.

“We need to shut down their offense. They are highly skilled and they play a fast-paced game. They get offense from throughout their lineup and we’re going to have to minimize the quality of chances we give up.”

You can catch that game on QCountry 91.5 starting with the pre-game show at 7:30 MB time.