WHEAT KINGS ROUND OUT ALL TIME TEAM ROSTER 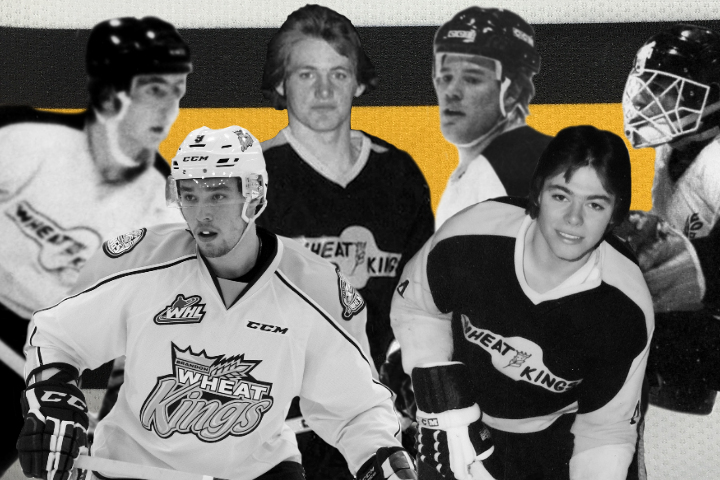 The team, as chosen by the fans, consists of two goalkeepers, six defencemen and 12 forwards.

Propp, Allison and McCrimmon were instrumental in Brandon capturing its first ever league championship in 1979, when they defeated Portland four games to two to earn a berth into the Memorial Cup. While the Wheat Kings fell to Peterborough in the championship final, the ’78-79 team established a Canadian Hockey League record that season by compiling a brilliant 58-5-9 record.

Propp and Allison teamed up with Laurie Boschman that season to form one of the league’s most prolific combinations. For Boschman, who was recently named to Brandon’s All Time 2nd line, he moved in between the two that season, replacing Bill Derlago, who had been with Allison and Propp the previous two years when they finished with 162, 160 and 182 points respectively.

Derlago becomes the fourth player from the seventies to be chosen to the first line.

Joining them are defenceman Ivan Provorov of Philadelphia as well as Flyers’ general manager Ron Hextall.

Son of Bryan Hextall Jr, Ron played three seasons in Brandon before going on to a stellar thirteen year career in the National Hockey League.

During his time with the Flyers, the Brandon product captured the Conn Smythe (Playoff Most Valuable Player), the Vezina (NHL’s top goaltender), the 1987 Canada Cup and was chosen to the NHL’s 1st All Star Team in 1986-87.

“I am extremely honoured and humbled to have been included amongst the many great players, who have played for the Wheat Kings over their 50-year existence. Thank you to my teammates, the Wheat King organization and the wonderful people of Brandon for this tremendous honour. This honour has special meaning to me having grown up in Brandon and it was a lifelong dream to play for the Wheat Kings.”

A native of Yaroslavl, Russia, Provorov enjoyed two great seasons in Brandon, leading the Wheat Kings to back to back appearances in the WHL championship final. After losing out to the Kelowna Rockets in 2015, Provorov and the Wheat Kings rebounded last spring, winning their first Ed Chynoweth Trophy in twenty years.

Philadelphia’s first round selection (7th overall) in the 2015 NHL Draft, Provorov became only the second Brandon defenceman to earn the WHL and CHL’s Top Defenceman honours when he was chosen last May.

“This is a huge honour to be named to the Top 20 of all time,” says Provorov, who added to his hockey resume during his time in Brandon by helping Team Russia win back to back silver medals at the World Junior Hockey Championship. “It’s a great organization, a lot of great players have played for the Wheat Kings and gone on to successful careers. The organization, the fan base is so strong. They love their hockey there and they helped me a lot.”

What does the Flyer blueliner, who currently has five goals and 24 points in 67 games with Philadelphia this season, remember most about his two great years in Brandon?

“Both years we had really good teams,” he adds. “The first year we won the regular season, went to the final and came up a little short. Then last year we went to the final again…won the league championship, which was pretty special. It was a great experience going on to the Memorial Cup in Red Deer.”

Joining him on the blueline is the late, great Brad McCrimmon, who just happens to be the only other Wheat King to win both the WHL and CHL Top Defenceman Award.

A first round draft choice of the Boston Bruins in 1979, the native of Plenty, Saskatchewan, went on to play for the Flyers, Detroit Red Wings, Hartford Whalers, Arizona Coyotes and Calgary Flames during his 18-year career. Ten years after leading Brandon to its first ever WHL championship, he was a big part of the Flames’ first ever Stanley Cup run in 1989.

McCrimmon remains Brandon’s highest scoring defenceman of all time, having scored 61 goals and 279 points during his three year career with the Wheat Kings.

During his NHL career, McCrimmon, who went on to coach with the New York Islanders, Calgary Flames, Atlanta Thrashers, Detroit Red Wings and WHL’s Saskatoon Blades, had 81 goals, 403 points and 1,416 penalty minutes in 1,222 career games.

Speaking on his brother’s behalf, Kelly McCrimmon said this about Brad and his contributions to the hockey club.

“This is a great honour for our family, we are very proud of Brad. He was fortunate to play on some great Wheat King teams and enjoyed a tremendous career, not only with the Wheat Kings but also for eighteen years in the National Hockey League. He would be extremely honoured…no one was prouder of the Brandon Wheat Kings than Brad. On behalf of our family, thank you.”

A native of Cranbrook, B.C., Allison broke into the WCHL (league was renamed in 1978) as a rookie in 1975-76 and by the time his 4-year WHL career was over he had become the highest scoring right-winger and second highest scoring player in franchise history.

A former first round draft pick of the Hartford Whalers, Allison finished his Wheat King career with 188 goals and 476 points.

A WHL and American Hockey League champion, Allison was not only named to the WHL’s First All Star Team in 1979, he was selected a Memorial Cup All Star.

“It was a privilege to play in Brandon on some very good teams,” says Allison, who scored 64 goals and 157 points during his NHL career. “A player’s success is as much about the people you play with as your own abilities. I was very fortunate to be on teams and play with players that were very special and very good. It’s hard not to have results when you play with guys like Brian (Propp), Billy (Derlago), Brad (McCrimmon) and Laurie (Boschman) and all of the other guys.”

The pride of Beulah, Manitoba, Derlago’s stay in Brandon began in 1974 as a Manitoba Junior Hockey League Traveller but it didn’t take long for the Wheat Kings to see how offensively gifted this slick skating center was.

After finishing out the 1974-75 campaign in the WCHL, Derlago really took off his rookie season, scoring 49 goals and 103 points. That marked the first of three straight 100-point seasons for Derlago, who was grabbed by the Vancouver Canucks with their first pick (4th overall) in the 1978 NHL Amateur Draft.

In 209 games as a Wheat King, Derlago, who went on to play for the Toronto Maple Leafs, Winnipeg Jets, Boston Bruins and Quebec Nordiques, scored 234 goals (2nd in franchise history) and 437 points (4th all time).

“First of all, let me send congratulations to the Wheat Kings on their 50th Anniversary in the WHL,” Bill “D” #10 recently told us. “A great franchise for a great hockey town with great fans. Thank you for including me in this group of great players. It means a lot.”

“I had a great time in Brandon…my teammates were fantastic,” he went on to say. “The best coach that I ever had was the late Dunc McCallum.”

The club’s all time leading scorer rounds out the star studded 1st line.

A native of Neudorf, Saskatchewan, Propp arrived in Brandon as a fresh faced 17-year old in the fall of 1976 after spending the previous season with the Melville Millionaires of the Saskatchewan Junior Hockey League.

While he spent the majority of his NHL days with the Flyers, Propp also saw duty with the Bruins, Whalers and North Stars. During his career, he came close to averaging a point per game with 425 goals and 1003 points in 1016 games.

A former Canada Cup Champion in 1987, Propp’s list of WHL awards is impressive.

In addition to winning two scoring titles and being selected to the WHL’s 1st Team All Star twice, Propp captured both Rookie of the Year and WHL Player of the Year.

“It was an honour to be picked for the Wheat Kings 20 best players in their history,” says Propp, who remained in Philadelphia following his retirement. “I am thrilled to be a part of that history. I have played with a lot of great players and coaches that have made a difference in my life. I thank all of them for their commitment to hockey in the WHL.”

“Here a few of the players that have helped me in my career – (Brad) McCrimmon, (Ray) Allison, (Bill) Derlago, (Glen) Hanlon, Dave Semenko, Dan Bonar, Laurie (Boschman), Rick Knickle, Wayne Ramsey, Don Dietrich, Don Gillen and Tim Lockridge to name a few. Dunc (McCallum) was an awesome coach and Kelly McCrimmon deserved a lot of credit with keeping Brandon in the WHL. My billets Larry and Ellen Decock helped me get through school and they are still good friends today.”

With Tuesday night’s announcement, the Wheat Kings 50th Anniversary All Time Team looks like this:

The first fourteen players were named during Brandon’s home games on March 1st, 3rd and 11th.

Fifty players were chosen last summer from the team’s 50 year history in the WHL. Fans then had September, October, November and December to vote for their choice of a 20-man roster.

The Wheat Kings, who dropped a 6-3 decision Tuesday night to the visiting Swift Current Broncos, will travel to Moose Jaw Wednesday before closing out the regular season with a weekend home and home series with the Regina Pats.

Saturday’s game at Westman Place is Awards Night, with trophies to be presented before, during and immediately following the game.