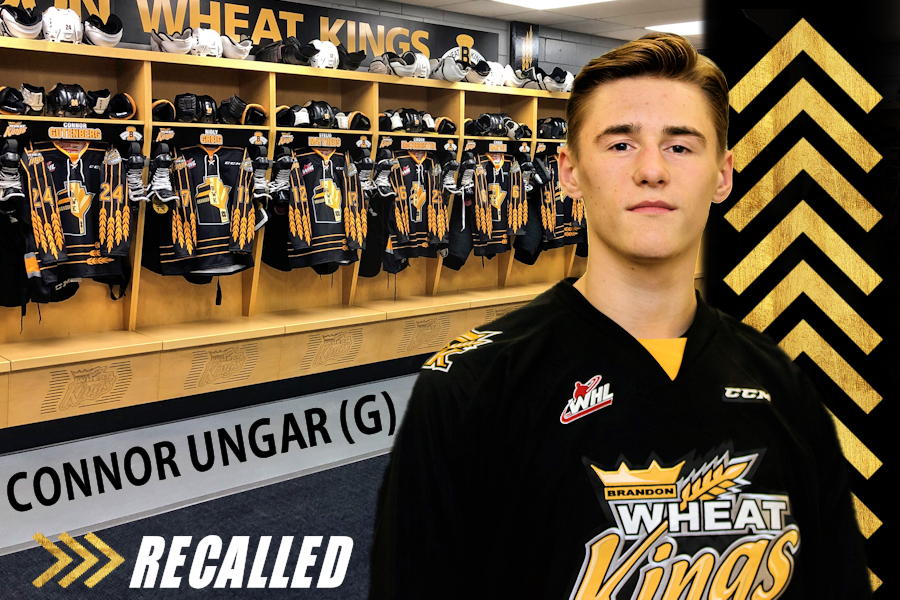 Brandon, MB. – The Western Hockey League’s Brandon Wheat Kings will be without veteran netminder Jiri Patera for the next 2-3 weeks.

In making the announcement Friday, Wheat Kings’ general manager Darren Ritchie confirmed that 17-year old Connor Ungar has been recalled from the Alberta Junior Hockey League’s Whitecourt Wolverines and will join the team in time for Friday night’s game against the visiting Saskatoon Blades.

A Vegas Golden Knights’ draft pick, Patera has been sidelined with a lower body injury that will keep him from joining the Wheat Kings for their annual west coast road trip.

Ritchie expects the 20-year old netminder will rejoin the team later this month when the Wheat Kings return from the coast.

With the Czech Republic netminder sidelined, Brandon’s goalkeeping duties will be shared by Ungar and veteran Ethan Kruger.

Kruger, who appeared in 22 games as a rookie last season, has played in two games this season, posting a 2.54 goals against average and a .923 save percentage.

Ungar meanwhile began the year in Brandon before being assigned to the AJHL after spending the 2018-19 campaign with the Northern Alberta X-Treme. With the X-Treme he compiled a 2.24 goals against average and a .916 save percentage. The Calgary product appeared in four games for the Wheat Kings last season as an affiliate player when Patera was representing his country at the World Junior Hockey Championship in Vancouver.

Meanwhile in other Wheat King news, the WHL club has confirmed that Finnish forward Marcus Kallionkieli continues to improve as he rehabilitates an off-season lower body injury.

Chosen by the Golden Knights in this year’s National Hockey League Entry Draft, the 18-year old forward hopes to join the Wheat Kings by mid November.

Following tonight’s game against Saskatoon, the Wheat Kings will hit the road for seven consecutive games, beginning Wednesday night in Everett, Washington against the Silvertips.

Tickets to Friday’s game are on sale now at the Keystone Centre box office, by calling (204) 726-3555 or online at keystonecentre.com