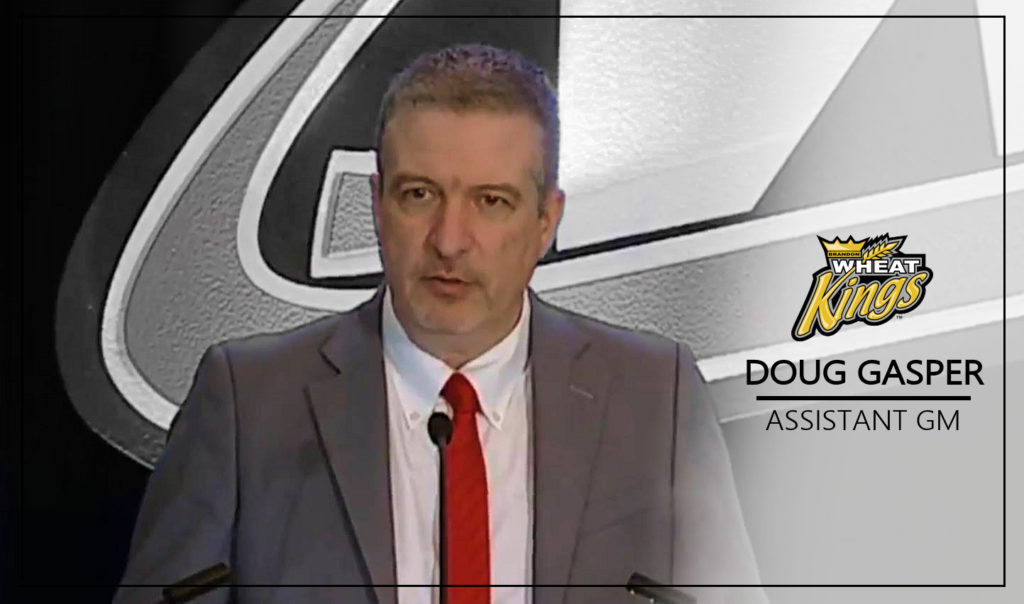 A 55-year old native of Rosetown, Saskatchewan, Gasper joins the Wheat Kings after spending the past two seasons as a Western Canadian amateur scout for the National Hockey League’s Vancouver Canucks.

A former area scout with both the WHL’s Prince Albert Raiders and Saskatchewan Junior Hockey League’s Nipawin Hawks, Gasper served as director of scouting with  Moose Jaw from 2015 to 2017. In all, he spent six seasons with the Warriors and was instrumental in leading the club to Eastern Division pennant in 2018.

“I’d like to thank Kelly McCrimmon and Darren Ritchie for this tremendous opportunity,” says Gasper. “The Wheat Kings are a model franchise in the Western Hockey League and the opportunity to work with Darren and the Hockey Operations staff is exciting. I look forward to continuing the tradition of successful Wheat King hockey.”

“We’re really excited to add Doug,” says Ritchie. “He’s well respected in our league…he’s hard working and has an excellent eye for talent.”

“Doug will run our scouting department and we will work closely together in helping build our team,” he went on to say.

Gasper assumes the role previously held by Ritchie, who was promoted to general manager in July. Ritchie spent three seasons in that position after serving nine years as an assistant coach.

Meanwhile the hockey club has named a new athletic therapist.

William Sadonick-Carriere comes to the Wheat Kings from Winnipeg, where he recently graduated with his Bachelor of Science degree in Athletic Therapy at the University of Winnipeg.

A graduate of Keyano College, he also received a diploma in Fitness Leadership and Movement in 2015.

In addition to his work at the University of Winnipeg Athletic Therapy Centre, Sadonick-Carriere served as Strength and Conditioning Coach with Evolution Hockey, a Personal Trainer at the Winnipeg Winter Club as well as Athletic Therapist with the FC Winnipeg Lions.

In recent years, William has also worked with the American Hockey League’s Manitoba Moose, Canadian Sport Centre Manitoba as well as the U of W Wrestling Team.

A member of the Canadian Athletic Therapy Association, he joins a WHL club that will have a number of new faces on the bench this season, joining new head coach Dave Lowry and assistant coach Mark Derlago. Returning as the club’s Equipment Manager is Scott Hlady.

Wheat Kings’ Training Camp begins later this month and will wrap up on Sunday, September 1st with the annual Black-White Intrasquad game at Westoba Place.