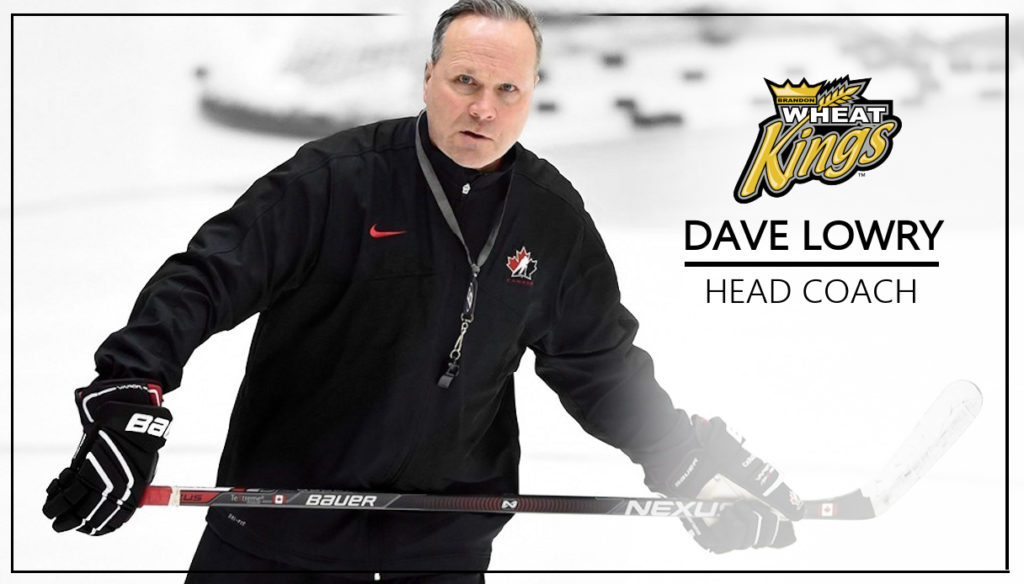 Lowry has an extensive coaching resume that includes experience at both the WHL and National Hockey League levels. An Ottawa, Ontario native, he has spent the past two seasons as an assistant coach of the Los Angeles Kings. Prior to joining the NHL club Lowry spent five seasons with the Victoria Royals, where he earned Coach of the Year honours on two occasions. In addition to serving as head coach for Team Canada at the 2016 World Junior Hockey Championships, he captured gold as an assistant coach in 2015.

During his five years in Victoria, he led the Royals to a winning record each season and made the playoffs in all five years. Overall the team compiled an impressive 209-124-27 record with Lowry behind the bench.

“We see this as a very positive step for our organization,” says Wheat Kings general manager Darren Ritchie. “Dave’s teams are always prepared, they play fast and are very competitive.”

“I’d like to thank Kelly McCrimmon and Darren Ritchie for the opportunity to coach the Brandon Wheat Kings,” says Dave Lowry. “I look forward to returning to the WHL and working with these athletes, developing them as players and individuals.”

Before joining the Royals in 2012, he spent close to a decade with the Calgary Flames organization in a variety of capacities. After serving as head coach of the WHL’s Hitmen in 2008-09, where he led Calgary to a 59-9-0-4 regular season record, an Eastern Conference Title and a berth in the Championship Final against Kelowna, he spent three years as an assistant coach with the NHL club.

In six seasons behind the bench in the WHL, he has a career record of 268-133-31. His .659 winning percentage is among the league’s career leaders.

As a player, Lowry played nineteen seasons in the NHL as a member of the Vancouver Canucks, St. Louis Blues, Florida Panthers, San Jose Sharks and Flames. He scored 164 goals and 351 points and 1,191 penalty minutes in 1,084 career games. A member of the Panthers that advanced to the Stanley Cup Final in 1995, he announced his retirement in 2004.

“I’m excited to get to Brandon to sit down with the Hockey Operations staff and make preparations for the 2019-2020 season,” Lowry went onto say. “My wife and I look forward to joining the Brandon community and continuing the winning Wheat Kings tradition.”

Lowry and his wife Elaine have four children, daughters Sarah and Tessa as well as two sons, Adam and Joel.

His son Adam is a former WHL all-star and is currently skating with the Winnipeg Jets. His other son Joel meanwhile was chosen in the fifth round, 140th overall, by the Kings in the 2011 NHL Entry Draft and recently signed with the Florida Panthers earlier this month.

“We are extremely excited to name Dave our head coach,” says Wheat Kings Owner and Governor Kelly McCrimmon. “He’s a proven winner, has tremendous experience and a great reputation for developing players.”

“This is a great hire for our players and for our fans,” he added. “I know Dave real well personally. I worked with him at the 2016 World Junior Tournament and I feel he embodies exactly what we want our organization to stand for.”

Lowry will be in Brandon next month in anticipation of the Wheat Kings Training Camp that begins on August 28th.