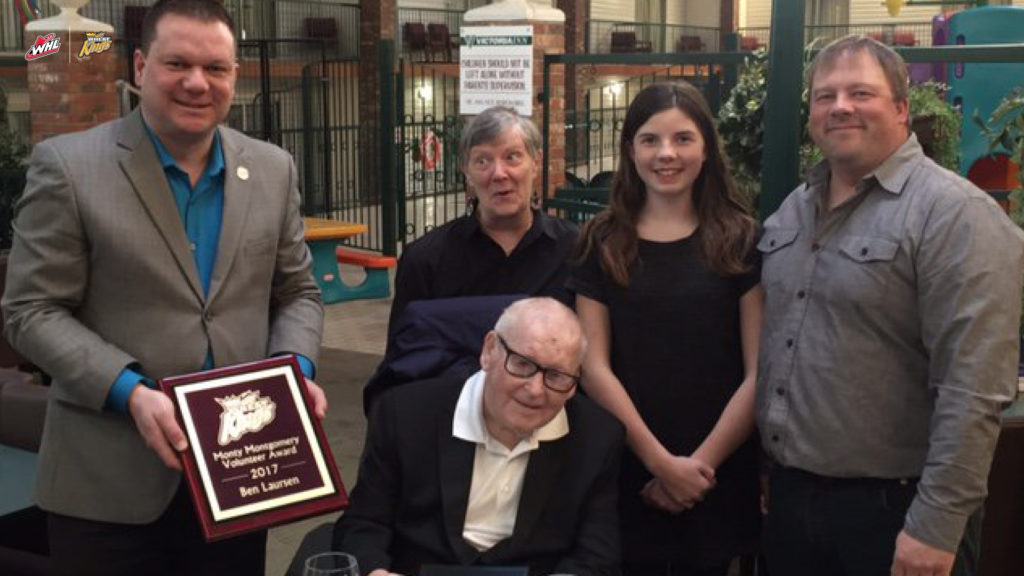 The Brandon Wheat Kings community is mourning the loss of long-time volunteer Preben “Ben” Laursen Wednesday. He was 78-years-old.

Over the years, his volunteer roles have extended to include billeting players, public address, statistics and for close to a decade he was the team’s director of off-ice officials, a position that came with a great deal of responsibility.

He was recognized by the club in 2017 as the first recipient of the Monty Montgomery Volunteer Award. Always eager to share the team’s successes and add to the off-ice experience, Laursen provided colour commentary alongside Dick Gibson on CKX Radio. After the Wheat Kings’ first Ed Chynoweth Cup title in 1979, Laursen lived a broadcasting highlight by being able to attend the 1979 Mastercard Memorial Cup in Montreal, Que.

Laursen’s commitment to the community of Brandon was not limited to the Wheat Kings as he served as the Chairman of Hockey at the 1979 Canada Winter Games, Publicity Chairman for the 1982 Brier, the Canadian Men’s Curling Championship.

He was also an executive member for the 1993 Scotties Tournament of Hearts, 1996 Western Canada Masters Curling Championship, and 1997 Olympic Curling Trials. When the Wheat Kings hosted the 2010 Mastercard Memorial Cup, Laursen served as the supervisor of off-ice officials.

“My time working with the Wheat Kings will be remembered fondly for many reasons,” said Laursen when receiving the Monty Montgomery Volunteer Award in 2017. “It’s easy to volunteer when you’re busy doing something that you love. I would also like to take this opportunity to thank the Montgomery family for this honour.”

“We are delighted to recognize Ben as the first recipient of this Wheat King volunteer award,” says Montgomery. “Our family believes that Brandon is a healthy, vibrant community in large part because of the countless volunteers for the many event that our community hosts.”

“On behalf of my wife Monika and our family, we extend our gratitude to the Wheat Kings for the opportunity to create this award and we especially thank Ben for his many years of volunteerism.”

Laursen will be remembered fondly as an integral part of the Wheat Kings’ success in the local community for generations to come.

The #BWK are mourning the passing of longtime volunteer Preben "Ben" Laursen. Laursen joined the Wheat Kings as an off ice official in 1965 and served as off-ice officials supervisor at @MCMemorialCup in 2010 #BWKFamily @TheWHL