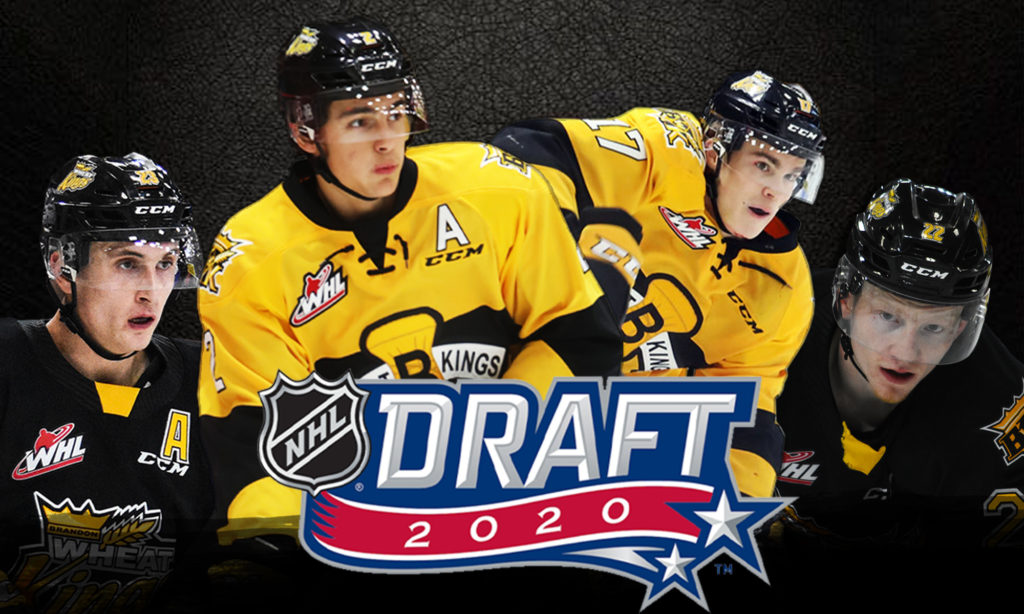 The Brandon Wheat Kings had a very successful showing at the 2020 NHL Draft, leading all Western Hockey League teams with 4 players selected by NHL clubs. After defenceman Braden Schneider was taken 19th overall by the New York Rangers and forward Ridly Greig was taken 28th in the 1st round of the draft on Tuesday, forwards Cole Reinhardt and Ben McCartney were the two Brandon Wheat Kings drafted on Wednesday. Reinhardt was chosen by the Ottawa Senators in the 6th round, 181 overall while McCartney was taken by the Arizona Coyotes in the 7th round, 204 overall.

Last season marked the fourth season in Brandon for Reinhardt who has played his entire WHL career for the Wheat Kings, beginning in his 16-year-old season in 2016-17. He has since amassed 252 games played and scored 141 PTS (75G-66A), averaging 0.56 points per game with 151 penalty minutes.

After selecting Alexis Lafreniere (Rimouski Océanic) with the 1st overall pick to start the Draft Tuesday, the New York Rangers traded their first round selection (22nd overall) and third round selection (72nd overall) for the Calgary Flames’ 19th overall pick in order to get Schneider. A 6’2”, 202-lbs right-handed defenceman from Prince Albert, Saskatchewan, Schneider is the first Wheat King to be selected in the 1st round since Nolan Patrick was chosen by the Philadelphia Flyers in the 2017 NHL Draft. Schneider is also the first Brandon Wheat King to get drafted by the Rangers since Richard Nejezchleb was taken 122nd overall in 2014.

Ridly Greig was taken by the Senators with their third pick of the night after they chose Tim Stutzle (Mannheim DEL) 3rd overall and Jake Sanderson (USHL) with the 5th pick. The ’02-born Greig is 5’11”, 162 lbs and finished the 2019-20 WHL season with 60 PTS (26G-36A) in 56 games. The speedy sniper turned pro scout’s heads leading up to the draft with not only his skill but also his grit, garnering 83 PIM in the shortened junior season.

Greig joins the likes of Jordan Fransoo in 2011 (186th overall) and Mark Stone in 2010 (178th overall) as Wheat Kings who have been drafted by the Ottawa Senators.

28 players belonging to Western Hockey League teams were selected by NHL clubs over the two day draft which was conducted online from October 6 – 7. In total, 78 players from the Canadian Hockey League were drafted.

Since the 1967 NHL Amateur Draft, a total of 2,076 players have been selected out of the WHL, including 322 first-round selections. This year is the second in a row 7 WHL players were taken within the first round.