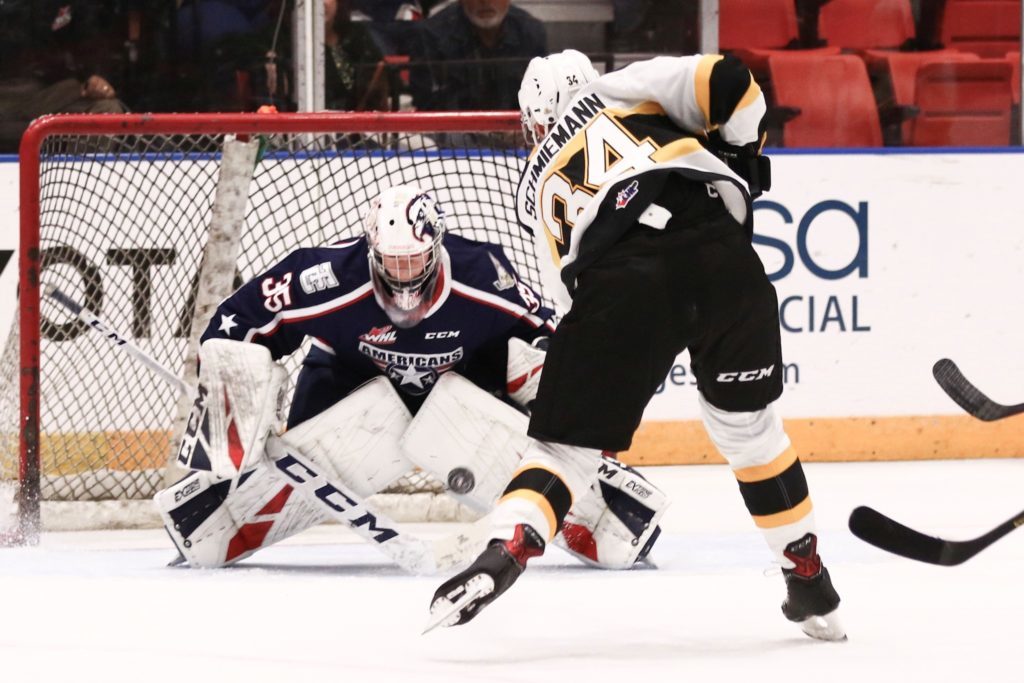 Edmonton, AB. – The surging Brandon Wheat Kings will have their work cut out for them this week as they open up a pivotal 4-game in five night Western Hockey League Alberta road trip Tuesday night in Edmonton against the Central Division leading Oil Kings.

In addition to the battle of the Kings in Edmonton, Brandon will play in Red Deer on Wednesday before closing out the busy stretch of games with stops in Calgary and Medicine Hat this Friday and Saturday nights.

The Wheat Kings, who had a 10-game winning streak snapped by the Lethbridge Hurricanes on Saturday night, have managed at least a point in eleven consecutive games to climb to within the top two clubs in the WHL’s Eastern Division – Winnipeg and Prince Albert.

Brandon is currently 25-17-2-2, good for 54 points, trailing Prince Albert by three and the ICE by five.

While the Wheat Kings don’t have an easy week ahead of them, several players at least will be getting a chance to play closer to home.

“It’s always exciting,” Schmiemann told Perry Bergson of the Brandon Sun on Sunday. “There’s family in every city so it’s going to be good, seeing familiar faces in the crowd. It’s always a nice thing to see.”

“It will be good,” Reinhardt told the Sun. “It’s always fun seeing the family and friends after the games. I have friends in all the cities basically and they all go to college, all my old high school friends, so it should be fun.”

It’s the second longest road trip of the regular season for Brandon, behind only the U.S. Division trip in October that also included a pair of Central Division matchups.

Schmeimann is looking forward to getting the trip started Tuesday night.

“It will be a good test for us for sure,” Schmiemann satys. “We just have to stick to our game plan. If we play a full 60- or 65-minute game, I don’t think there is anyone who can beat us. If we can stick to that plan of getting pucks in deep and playing fast, we’ll be totally fine.”

During their last trip to Alberta in mid-November, Brandon went 2-1-0-0.

Following this week’s trip, the Wheat Kings will have eighteen regular season games remaining – nine at home and nine away.

Brandon’s next home game is a week from Friday when they play host to the Medicine Hat Tigers at Westoba Place in the annual WHL Suits up to Promote Organ Donations, presented by RE/MAX.

The Wheat Kings will be wearing special theme jerseys during the game, honouring Hockey Night in Canada, with the sweaters available for auction throughout the game.

The first 3,000 fans in attendance will also have a chance to win a commemorative Coaches Corner bobblehead.

Tickets to all remaining home games are on sale now at the Keystone Centre box office, by calling (204) 726-3555 or online at keystonecentre.com