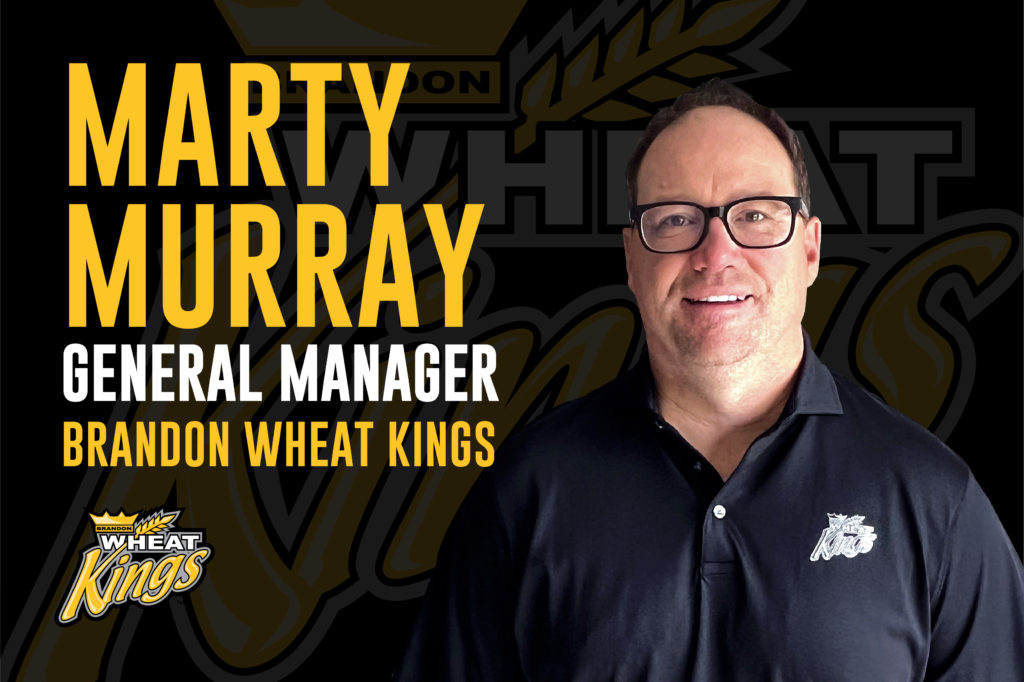 Murray is certainly no stranger to Wheat King fans, the former Captain and WHL Player of the Year was named to the Brandon Wheat Kings All-Time Team during the 50th Anniversary Season in 2017.  In 264 games as a Wheat King, Murray recorded 132 goals and added 260 assists for 392 career points. He was named to Team Canada’s World Junior Team in 1994 and 1995, being awarded Best Forward and named to the World Junior All-Star team while leading the prestigious tournament in scoring with 15 points in 1995.

The Wheat King fan favourite was drafted by the Calgary Flames with the 96th overall pick in the 1993 National Hockey League Entry Draft. He went onto have a 14-year professional hockey career spanning the American Hockey League, Europe and 261 NHL games with the Flames, Philadelphia Flyers, Carolina Hurricanes and Los Angeles Kings.

“I can’t tell you how happy I am to be back with the black and gold,” Murray said from Sioux Falls, South Dakota on Sunday. “When I retired from playing and got into the coaching and the managerial side of things, I always thought that maybe there would be an opportunity to come home and work for the Wheat Kings someday. It’s a real thrill and honour, and I’m humbled to be coming back home to Brandon.”

Wheat Kings Owner and Governor Jared Jacobson was thrilled when discussing Murray. “After working so diligently all summer, I am so happy patience paid off to get one of the best Wheat Kings of all-time back with the organization.”

Murray was quick to give thanks, “I want to thank Jared for his commitment, there were several long discussions with moving a family and things like that. Lots of considerations, and I want to thank him for this great opportunity.”

Murray brings with him a history of winning. The former WHL All-Star has won two World Junior Gold Medals for Canada, a Calder Cup, Swiss League Championship and two Spengler Cups.  In 2019, he was named the NAHL General Manager of the Year, that same year the Lyleton product was inducted into the Manitoba Hockey Hall of Fame.

Murray is looking forward to the next chapter in his career as he returns to the Wheat City, “I think it’s a real solid roster that I will get to know as we get going. The thing that appealed to me the most was talking to Jared, meeting Chris Moulton (Director of Hockey Operations), and having Mark Johnston (Senior Scout) in my corner, who was my assistant coach when I was 16. Just going through all the pieces, it gave me great excitement to see that not only what we have now, but the future as well. There is a good foundation in place and hopefully we can carry on the tradition of what the Wheat Kings are both on and off the ice.”

For Jacobson, he finally got his man. “To have a guy at the helm with his experience, not only as a player within this organization and this community, but with his success in the pro ranks across multiple leagues. Those are experiences we can all learn from as an organization.“

With camp opening this week, the new Wheat Kings General Manager won’t have much time to get to Brandon and settled in, but he says that is fine with him. “I’m ready to dive in with both feet first this week, I’m a team guy and will work with all the staff to put the best product on the ice.”

Murray will arrive in Brandon today in anticipation of the Wheat Kings Training Camp that begins on-ice sessions Thursday.