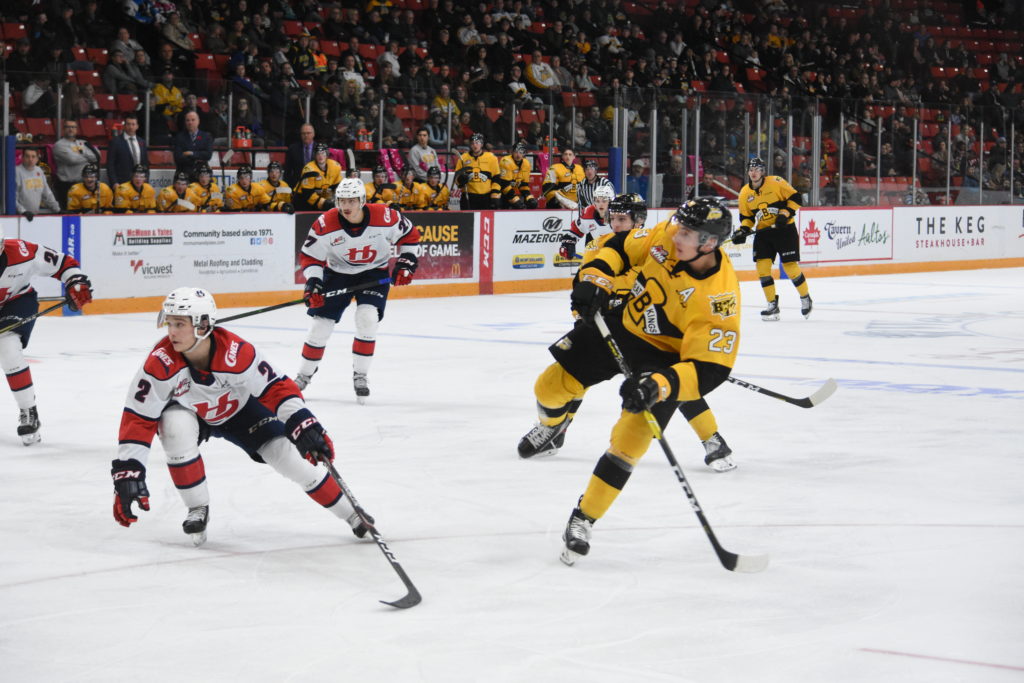 The game was the second of a 3-game home stand for the Wheat Kings, who blanked the Swift Current Broncos 5-0 on Friday.

After an opening period that saw both teams trade goals, the ‘Canes regained the lead eight minutes into the second when Okuliar notched his second of the night, beating Brandon netminder Ethan Kruger upstairs.

Alex Thacker added what proved to be the eventual game winner four minutes later as Lethbridge made it 2 for 2 against Manitoba’s Western Hockey League clubs this weekend. The Canes opened the weekend with an 8-2 victory over the ICE in Winnipeg on Friday.

Defenceman Neithan Salame – with his first goal of the season – and Ridley Greig on a third period powerplay, scored in a losing cause for the Wheat Kings, whose record slipped to 7-10-0 on the season.

Greig’s goal pulled Brandon to within a goal in the third but D-Jay Jerome restored the ‘Canes two goal advantage midway through the period following a controversial hit on Brandon captain Connor Gutenberg.

Kruger, who was recognized during the game for being chosen the TELUS Wheat King Player of the Month for September / October, made 29 saves in the Brandon net while Carl Tetachuk turned aside 29 Brandon shots for the win.

The Wheat Kings will close out this 3-game home stand Tuesday night when another Central Division team – the Red Deer Rebels – pay a visit.

This will be the first “2 for Tuesday” of the 2019-20 season, which means in addition to the Keystone Centre and Center Plate offering a number of exciting concession specials, fans will receive a “free” ticket to this game with the purchase of another at the regular price.

The Keystone Centre box office will reopen on Monday morning but fans can order online between now and then at www.keystonecentre.com

Following Tuesday’s game Brandon will hit the road for back to back road games next weekend, before returning home to host Winnipeg in its annual Remembrance Day game on Monday, November 11th.