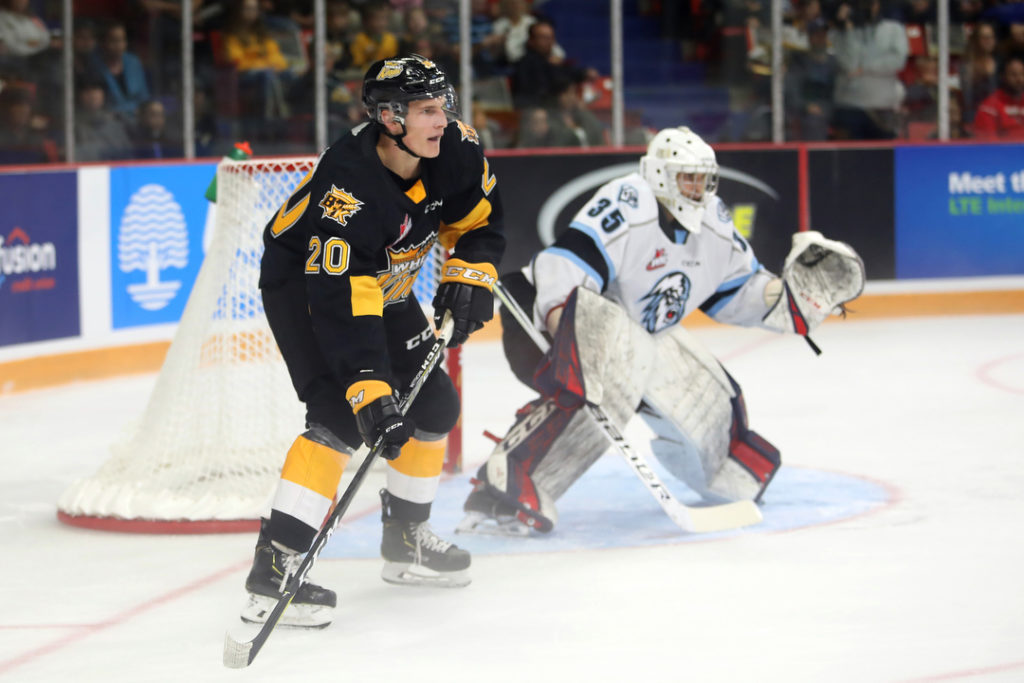 Brandon, MB. – It was almost déjà vu all over again at Westoba Place Friday night.

Four years after having their Home Opener cancelled in the second period due to thick fog in the building, the Brandon Wheat Kings managed to escape another fog related cancellation this time. However, despite surviving several third period delays, the Wheat Kings couldn’t score a comeback win, dropping a disappointing 3-2 decision to the visiting Winnipeg Ice at Westoba Place.

The Wheat Kings will be hoping to split the season opening home and home series when they travel to Winnipeg on Saturday night.

Following a scoreless opening period, the Ice took control of the game in the second, scoring two unanswered goals. They added what proved to be the game winner in the opening minute of the third.

The Wheat Kings finally got on the board midway through the third on a shot from defenceman Vincent Iorio and pulled to within one with less than five minutes to play on a goal by Zach Wytinck but despite a last minute push, they couldn’t get the equalizer.

Connor McClennon, Isaac Johnson and Michal Toply scored goals for the Ice, who outshot the Wheat Kings 45-26, including 20-7 in the second when Brandon netminder Jiri Patera was at his best.

Friday night marked the first time in thirty-five years that the Wheat Kings have faced off against a Winnipeg club.

The Ice relocated from Cranbrook, B.C. to Winnipeg this past spring and have become the first Major Junior team to be located in the provincial capital since the Winnipeg Warriors moved to Moose Jaw in the summer of 1984.

It also marked the Brandon coaching debut of 2-time WHL Coach of the Year Dave Lowry. Lowry joined the Wheat Kings this past summer after spending the past two years with the National Hockey League’s Los Angeles Kings.

Following Saturday’s game at the Max Bell on the campus of the University of Manitoba, the Wheat Kings will return home and begin preparations for next weekend’s home and home series with the Warriors.

Friday night is Manitoba Fridge Magnet Schedule Giveaway, with the first 2,500 fans through the doors of Westoba Place receiving a 2019-20 fridge magnet schedule.

Tickets to that game as well as all remaining regular season games will go on sale this Tuesday, September 24th at the Keystone Centre box office. Fans can also order online at keystonecentre.com or by calling (204) 726-3555.

For those fans wanting to guarantee their seat for the rest of the season, season tickets are still available. To order or for more information be sure to visit the Wheat Kings’ office or by calling (204) 726-3535.