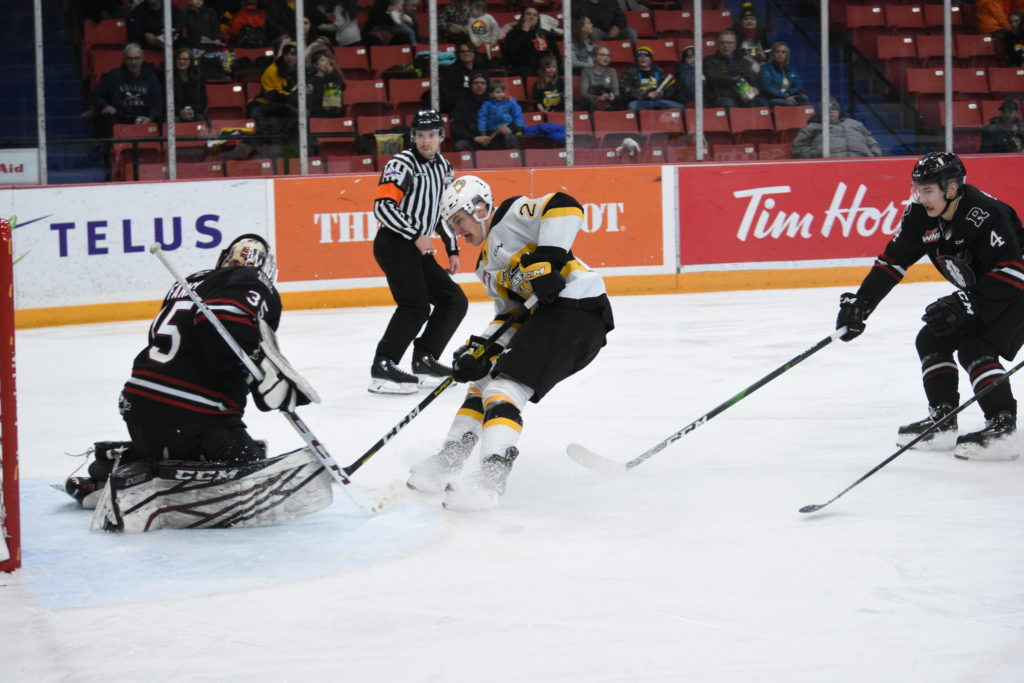 Marcus Sekundiak’s goal with just under nine minutes remaining in the third period lifted the Wheat Kings to a 2-1 victory over the visiting Red Deer Rebels before close to 3,200 fans at Westoba Place.

With the win – the Wheat Kings sixth in a row – Brandon improved to 21-17-1-2 and moved to within four points of the Winnipeg ICE in the Western Hockey League’s Eastern Division.

While Sekundiak scored the game winner, it was the work of netminder Jiri Patera that was the difference in this one.

The 20-year old Vegas Golden Knights’ prospect turned aside 41 shots, including a number of brilliant stops to improve his personal record to 12-7-0-2.

At the other end of the ice, Byron Fancy stopped 21 of 23 shots for the Rebels, who travel to Winnipeg on Saturday night.

Luka Burzan, with his 22nd goal of the season, opened the scoring in the first period while Dallon Melin’s second period goal tied the game.

Brandon was assessed six of 12 minor penalties and two of three majors.

In addition to a first period fight between Brandon’s Ben McCartney and Ethan Sakowich of the Rebels, Ridly Greig was slapped with a five minute major for goaltender interference during the second period of play.

The Wheat Kings, who made two deals prior to Friday’s WHL Trade Deadline, don’t play again until Wednesday night when they continue their four game home stand against the Prince George Cougars.

The game will be the first between the two teams since Brandon acquired right-winger Reid Perepeluk from the Cougars in exchange for Jonny Hooker on Thursday.

Perepeluk made his Brandon debut tonight.

In the only other deal made by Wheat Kings’ general manager Darren Ritchie was to send rookie forward Bode Hagan to the Swift Current Broncos for a sixth round bantam draft choice in 2021.

Tickets to Wednesday’s game against Prince George as well as Friday’s against Calgary – TELUS Michael Ferland Bobblehead Night – go back on sale Saturday at the Keystone Centre box office. Fans can also order online a keystonecentre.com or by calling (204) 726-3555.