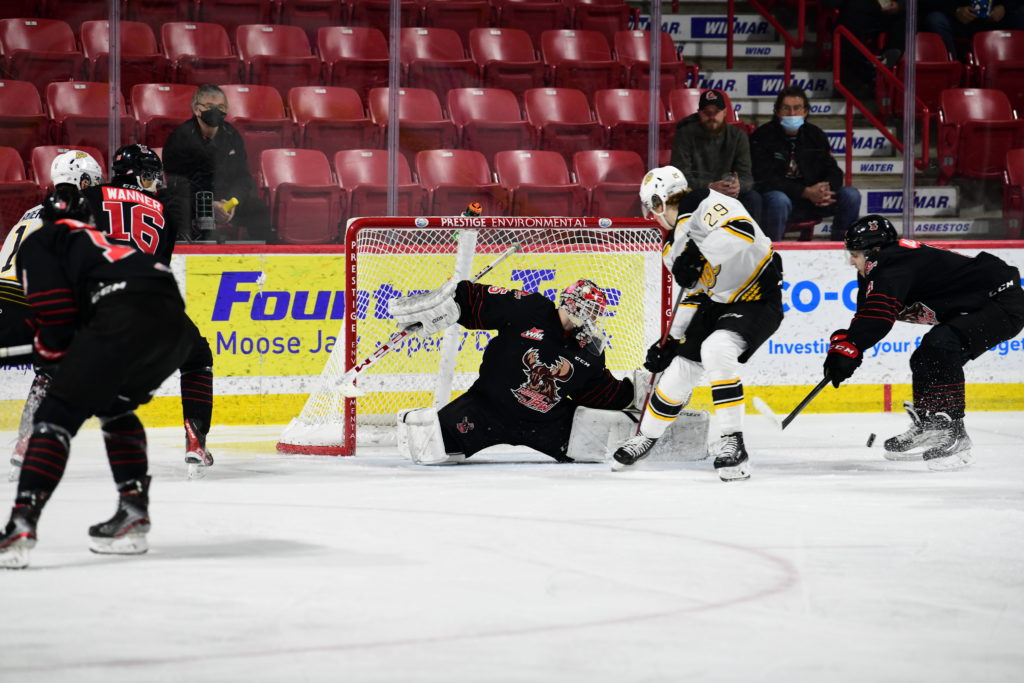 Moose Jaw, SK – Another slow start cost the Wheat Kings in a 5-4 shootout loss to the Moose Jaw Warriors on Tuesday night.

For the second straight game, the Wheat Kings were outshot in the opening frame, this time 12-6, thanks in large part to back-to-back minor penalties.

“Our penalties are definitely a concern,” said Head Coach Don MacGillivray “The timing is a big concern too. We’ve taken penalties when were down a man and when we’re on the powerplay. It taxes our bench. Moose Jaw got in the lanes tonight, block shots laid it on the line…we didn’t and they earned the extra point.”

Marcus Kallionkieli opened the scoring early in the second period, but the Warriors would respond with three quick goals, both on the powerplay, the second of which came on the tail end of a five-minute penalty kill.

Ridly Greig was assessed a major penalty and a game misconduct for interference after colliding with Daemon Hunt along the end wall.

Riley Ginnell and Nate Danielson would pull the Wheat Kings even late, in a period dominated by the black and gold. Brandon finally turned on the offense and outshot Moose Jaw 18-8 in the third, a season-high for shots in a period.

“We didn’t start playing until the third period,” said MacGillivray. “We started to generate chances and get pucks into good areas in the third period but it was too late.”

Both teams exchanged chances in overtime but the Warriors would earn the extra point in the shootout.

The Wheat Kings continue this four-game road trip on Wednesday night in Swift Current and will need a much better start vs the Broncos.

“We only played 20 minutes today so we should have plenty of energy for Swift Current,” added MacGillivray.  “We have to start bringing it night to night. Once we do that we can roll four lines but right now we have guys not coming to play and that’s not good enough.”

You can catch all the action from Speedy Creek on Bounce 96.1 and the iHeartRadio App, or online via the CHL Live feed.