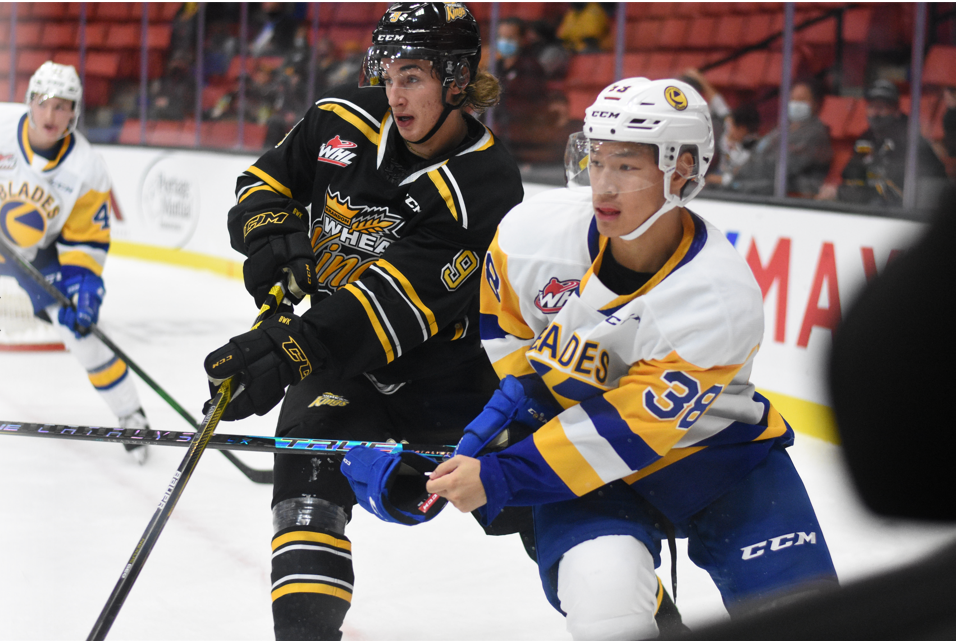 Brandonite Tristen Robins lead the way in his hometown picking up three assists while Rhett Rhinehart (1G-2A) and Kyle Crnkovic (2G-1A) each had three point nights of their own.

Ridly Greig and Nate Danielson replied for Brandon in what can only be described as a dissapointing effort from the home side.

“We won’t be a good team playing the way we did tonight,” said Head Coach Don MacGillivray. “We were cheating, stick checking, turning pucks over. We weren’t very good tonight. It was disappointing night all around.”

The Blades finished the night three for four on the powerplay, while Brandon scored twice on six chances. Of the eight goals scored on the night, six of them came during specialty teams situations.

The Wheat Kings gave up 46 shots on goal, while dealing with another tough injury. Goaltender Ethan Kruger left the game midway through the second period after colliding with Jayden Wiens. Carson Bjarnason came on in releif and stopped 19 of 22 shots he faced. The Wheat Kings entered action on Saturday night without the likes of Marcus Kallionkieli, Brett Hyland, Mason Ward, and Jake Chiasson.

“There are lots of things tonight that are disappointing, but we will re-group and move on from this,” said MacGillivray. “We have to prepare for tomorrow. Regina will be a tough opponent, to finish off 3 games in 3 days, but that’s what the WHL is all about. The older guys will have to lead the way for us and be ready to play.”

The Wheat Kings wrap up this Thanksgiving Weekend triple-header on Sunday afternoon in Regina. You can catch all the action on Bounce 96.1 or the iHeartRadio App. The pre-game show begins at 4:45, puck drop at 5:00.