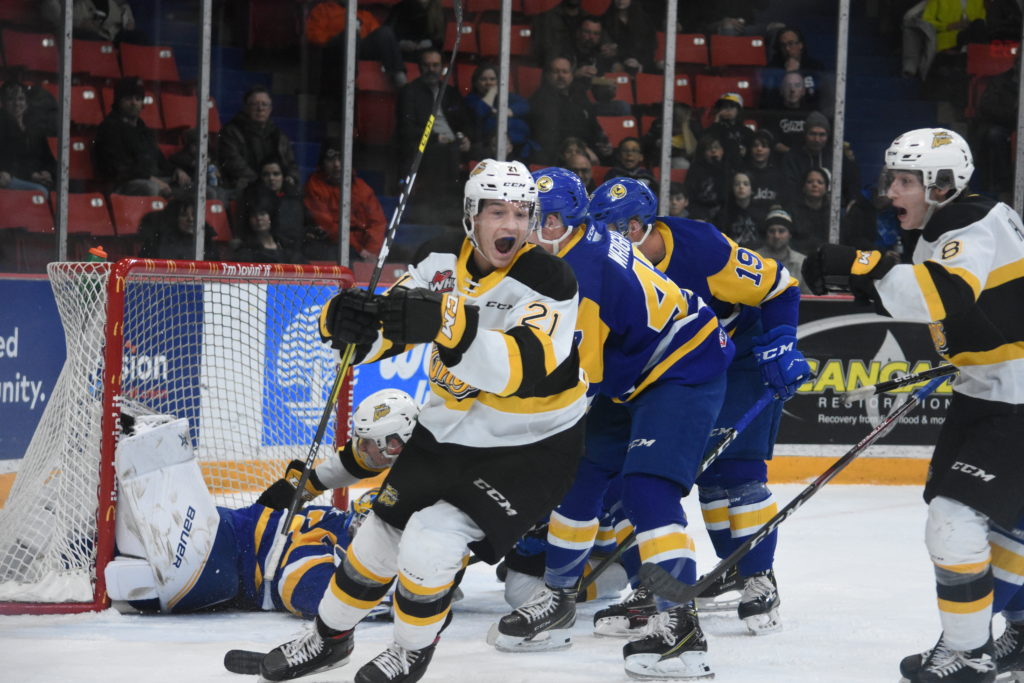 Duncan Pierce scored twice and Jiri Patera turned aside 36 shots as the Wheat Kings blanked the Blades 4-2 before close to 3,700 fans at Westoba Place.

With the win, the Wheat Kings improved to 29-19-3-2 and coupled with Winnipeg’s 5-4 loss in Lethbridge, Brandon pulled to within two points of the second place ICE in the Western Hockey League’s Eastern Division. The win also moved Brandon four points up on fourth place Saskatoon.

The Wheat Kings, who opened up the series with an impressive 5-1 victory in Saskatoon on Wednesday night, picked up right where they left off in this one by jumping out to a 3-0 first period lead on goals by Pierce, Cole Reinhardt and Luka Burzan.

For Burzan, the goal was the 100th of his WHL career.

While the Wheat Kings dominated the first, the Blades bounced back in a physical second period, scoring twice to cut the Brandon lead to one. The score stayed that way until the final minute when Pierce sent a 150-foot shot into an empty net to close out the scoring.

Kyle Crnkovic and Zach Huber scored in a losing cause for the Blades, who outshot Brandon 38-30.

A two-time winner of the WHL Coach of the Year Award, Lowry is in his first season behind the Brandon bench after spending the past two years as an assistant coach with the National Hockey League’s Los Angeles Kings.

The Wheat Kings busy weekend continues Saturday night in Prince Albert with a game against the defending champion Raiders and will conclude Monday afternoon – Louis Riel / Family Day – in Regina against the Pats.

Following this weekend, the Wheat Kings will return home for back to back games next weekend against Edmonton and Prince Albert on Friday and Saturday nights.

Two members of the Bombers will be attending the game – with the Cup – to perform the cremonail opening face-off and sign autographs during the first intermission.

Tickets to the two games, which includes a special Saturday night appearance of the “Paw Patrol” go back on sale Saturday morning at the Keystone Centre box office, by calling (204) 726-3555 or online at keystonecentre.com.