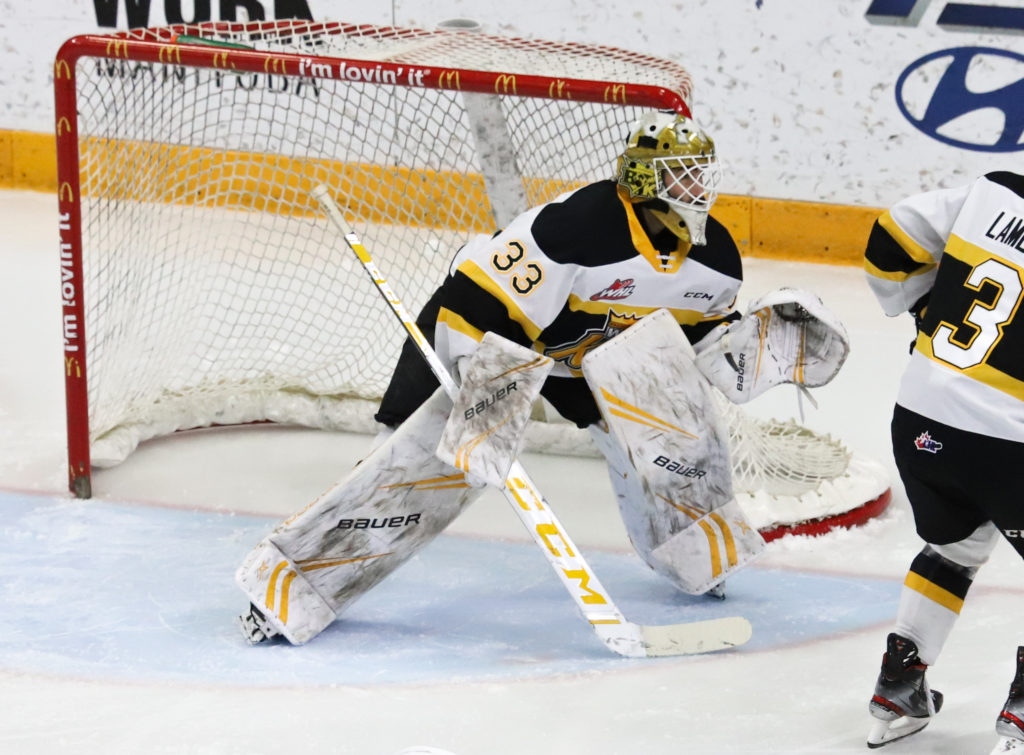 Chad Nychuk and Duncan Pierce both scored once and set up another as the Brandon Wheat Kings blanked the visiting Prince George Cougars 4-0 Wednesday night before a crowd of 2,506 “frozen” fans.

The Wheat Kings, who played the game without Canadian Hockey League Top Prospects Ridly Greig and Braden Schneider, opened the scoring with a first period powerplay goal by Nychuk and after a scoreless second frame, Brandon blew things open in the third with three unanswered.

Connor Gutenberg and Marcus Sekundiak rounded out the scoring for the Wheat Kings, who outshot Prince George 42-21.

In turning aside 21 shots and earning his fourth shutout of the season and fifth of his WHL career, Jiri Patera has moved into a tie with Brian Elder and Josh Harding for eighth place on the club’s all time list for shutouts.

“We were creating all kinds of opportunities tonight and the message was to just stay patient,” Brandon coach Dave Lowry told Q Country’s Branden Crowe following the game. “We needed to keep doing what we were doing and eventually you can break a team down. These games are 60 minutes and tonight after 40, we didn’t like the score but we liked where we were.”

Brandon’s seven-game winning streak has pushed their record to 22-17-1-2, good enough for 47 points. The Wheat Kings are now four points up on Saskatoon for third place in the East Division and four points back of Prince Albert for second place.

“Right now we’re finding different ways to win hockey games,” added Lowry. “What that does is put belief into your group. Tonight, we’re in a one-goal game and we stayed patient, we managed pucks in the neutral zone, didn’t have a lot of turnovers and got the job done.”

Wednesday’s game was played inside but outside the temperatures were dipping to -35 and -49 with the wind chill and it was the first game between the two teams since last week’s trade that saw Brandon acquire rugged right-winger Reid Perepeluk in exchange for Jonny Hooker.

The Wheat Kings will close out their current 4-game home stand Friday night when the Calgary Hitmen pay a visit.

Friday night is Michael Ferland Bobblehead Night, presented by TELUS. The first 2,800 fans through the doors will have a chance to win one of 1,400 bobbleheads, featuring the likeness of the former Wheat King turned Vancouver Cancuk.

Tickets to Friday’s game are on sale at the Keystone box office, by calling (204) 726-3555 or online at keystonecentre.com