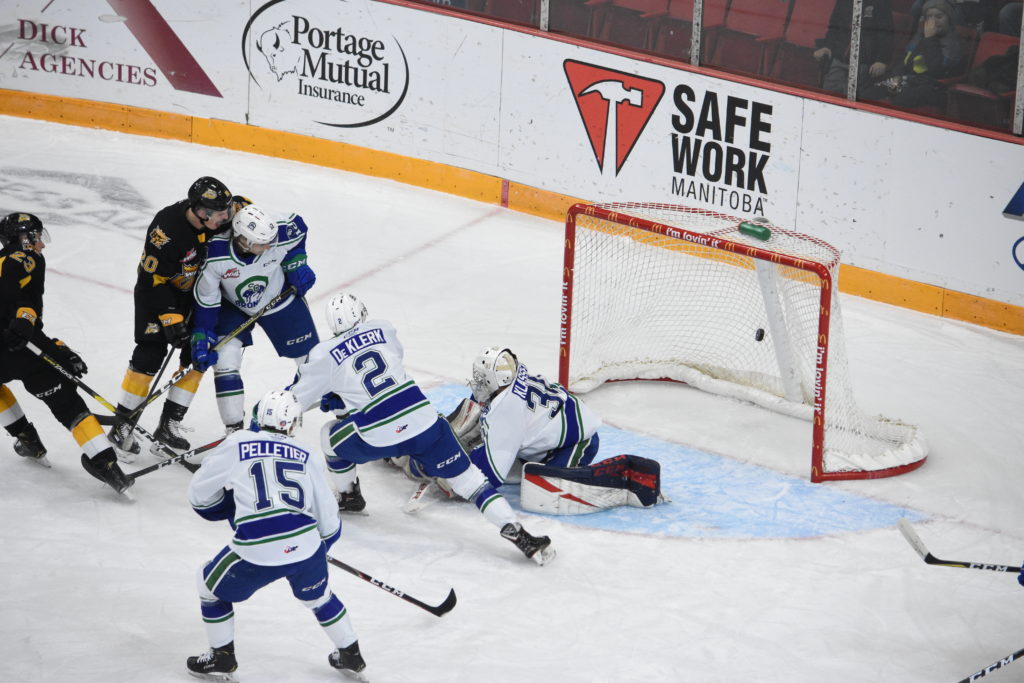 With the win – Brandon’s second in five days against the Broncos – the Wheat Kings improved to 7-9-0 on the season.

The Wheat Kings used a season high 53-shot attack and the goaltending of Ethan Kruger to nail this one down.

Kruger, who was named the Wheat Kings’ TELUS Player of the Month for October on Thursday, turned aside 24 shots, including thirteen in the opening period when Swift Current had a number of excellent chances.

Friday’s shutout for Kruger, who has now started nine consecutive games, was the first of his WHL career.
Offensively, the Wheat Kings were led by 17-year old rookie Nolan Ritchie.

The former Manitoba AAA Midget League scoring star scored twice and set up another for the Wheat Kings, who led 1-0 and 2-0 at the period breaks.
Thanks to Ritchie’s second goal, fans attending the game can now save 50% on their online pizza orders at Dominos on Saturday (when using the Promo Code WK5)

Riley Ginnell, Ben McCartney and Cole Reinhart rounded out the scoring for the Wheat Kings, who put this game away with three goals in a span of four minutes in the third.

Brandon finished the night 2 for 6 with the man advantage while killing off two penalties, including a five minute major to veteran defenceman Braden Schneider in the first period.

This will be the second meeting in a week between the two teams as the Hurricanes scored a 5-2 victory in Lethbridge last weekend.

Saturday is MNP Team Poster Giveaway and is another Saturday Kids Night.

In addition to offering kids concession specials, there will be inflatables on the main concourse from Jumparoo. As well, children’s tickets will be on sale for $5 (plus agency fee) and for those purchased at the box office, fans will receive a McDonalds Happy Meal voucher.

For fans not visiting the box office, tickets can be purchased online at keystonecentre.com or by calling (204) 726-3555.