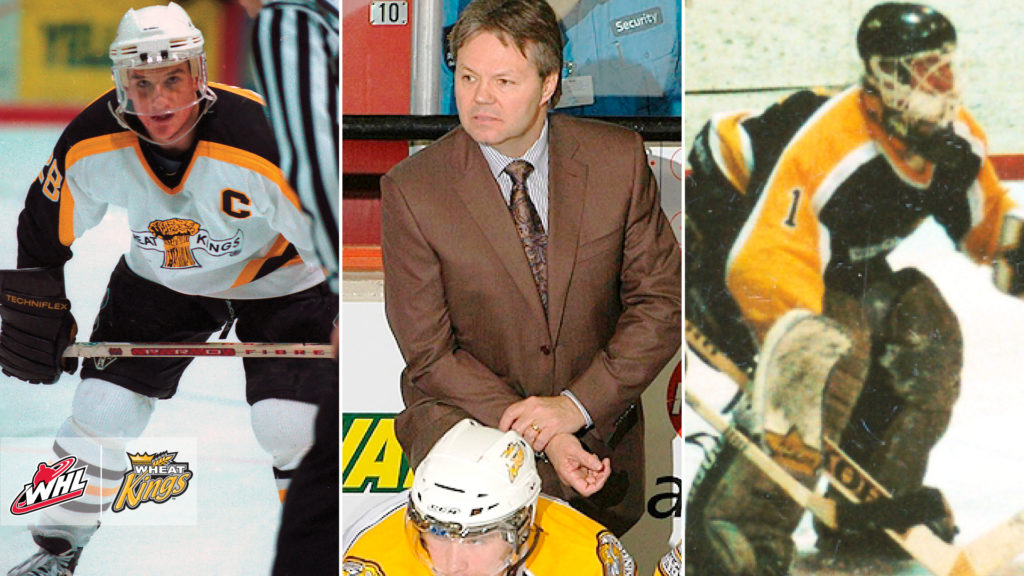 On Saturday, October 5, several former members and associates of the Western Hockey League’s Brandon Wheat Kings were inducted into the Manitoba Hockey Hall of Fame (MHHOF).

Five of them, including Wheat Kings Owner and former general manager Kelly McCrimmon have been inducted to the class of 2019 in Winnipeg, Man.

A former member of both the Saskatchewan Junior Hockey League’s (SJHL) Prince Albert Raiders and Wheat Kings, McCrimmon transitioned from player to coach to general manager early in his career. The Plenty, Sask. native led the Wheat Kings to three WHL championships – 1979, 1996 and 2016. He also represented Brandon at five Memorial Cups, including 2010 when his franchise hosted Manitoba’s first four-team national championship.

Under his watch, the Wheat Kings won more games than any other team in the Canadian Hockey League (CHL). In 2017, McCrimmon, a three-time winner of the Lloyd Saunders Memorial Trophy as WHL Executive of the Year, joined the expansion Golden Knights, helping the new entry to the Stanley Cup finals in their very first season.

A four-year member of the Wheat Kings, Murray joined the club in 1991 as a 16-year-old rookie and after helping Brandon establish a CHL record for Most Improved Team in history, he won back-to-back gold medals with Team Canada at the World Junior Hockey Championships. The Lyleton, Man. product was instrumental in leading Brandon to the 1995 Eastern Conference title and its first appearance in the WHL Championship final in 16 years.

Chosen by the Calgary Flames in the fourth round, 96th overall, of the 1993 NHL Entry Draft, the centreman went on to play for both the Philadelphia Flyers and Los Angeles Kings, before retiring in 2010. Murray currently serves as head coach and general manager of the Minot Minotaurs of the North American Hockey League (NAHL).

An Oakbank, Man. native, Kidd arrived in Brandon as a 16-year old rookie in the fall of 1988. Not only did he establish himself as one of the league’s best rookies in net, but he also went on to help Canada win two gold medals at the World Junior Hockey Championships. Kidd also captured a Memorial Cup following a blockbuster trade between Brandon and the Spokane Chiefs.

A former first-round draft choice of the Flames, at 11th overall, Kidd went on to play 11 seasons in the NHL with stops with Calgary, the Carolina Hurricanes, Florida Panthers and Toronto Maple Leafs.

Born in New Westminster, B.C., Yake and his family moved to Mather, Man. when he was seven-years-old. A scoring star with the Wheat Kings in the mid to late eighties, he was chosen by the Hartford Whalers in the fourth round, 81st overall, in the 1987 NHL Entry Draft. Yake, a forward, would go on to play 403 games in the NHL with the Anaheim Mighty Ducks, Maple Leafs, St. Louis Blues and Washington Capitals before closing out his professional career in Europe.

Fitchner; meanwhile, played from 1968-70 in Brandon as a centreman, before embarking on a professional career that saw him play for several World Hockey Association (WHA) and NHL clubs, including the Indianapolis Racers, Edmonton Oilers and Quebec Nordiques. Following his retirement, he attended Brandon University where he also served as head coach of the Bobcats.

WATCH | Former Bobcat coach Bob Fitchner is headed for the @MBHHOF with the 2019 induction ceremony set for Saturday in Winnipeg. #Bdnmb pic.twitter.com/MSmC5Fg1q2

Rounding out the list of inductees this year is WHL official Haithwaite, who served as a young referee in the Brandon area before working his way up to the Manitoba Junior Hockey League (MJHL) and WHL. He has officiated for championships at the local, national and international level and is currently a video goal judge for NHL games at Bell MTS Place.

Nice touch by WHL Brandon Wheat Kings at their home opener vs Winnipeg Ice, to honour their group (Fitchner, Kidd, Murray, Yake, McCrimmon) and Official Rob Haithwaite. They'll be Inducted into the Manitoba Hockey Hall of Fame on October5th, 2019. pic.twitter.com/s91Cf7MLIu