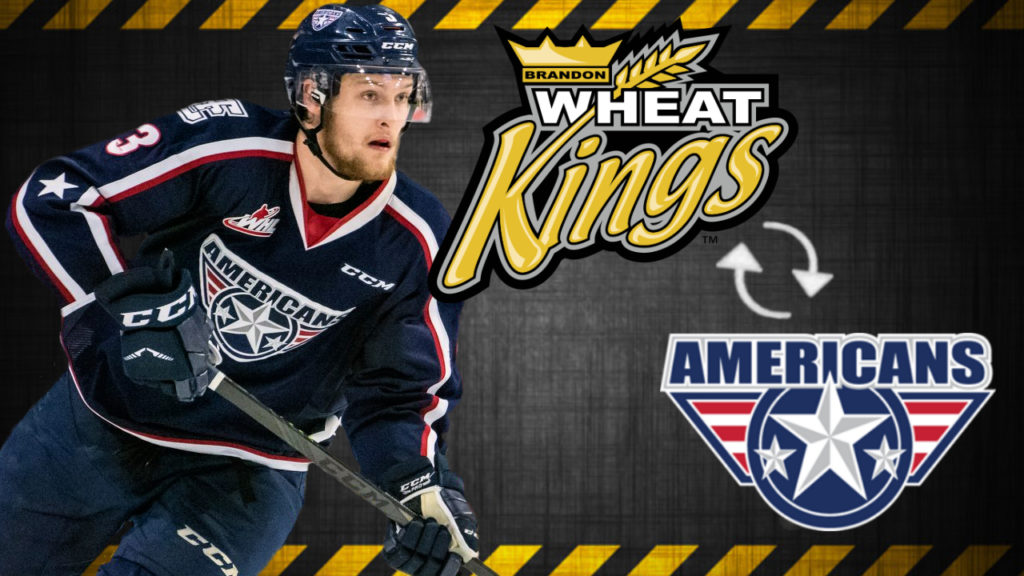 Brandon, MB. – The Brandon Wheat Kings have announced the acquisition of 20-year old defenceman Dominic Schmiemann from the Tri-City Americans.

In exchange for the 6’4” 198 lb. defenceman, the Wheat Kings surrendered a fifth round pick in the 2020 Western Hockey League Bantam Draft as well as a conditional sixth round selection in 2022.

A four year WHL veteran from James River Bridge, Alberta, the 20-year old Schmiemann has scored seven goals, 39 points and accumulated 268 minutes in penalties in 207 career games. In four games for the Americans this season, the former first round bantam selection (12th overall, 2014) of the Swift Current Broncos has one goal and 11 penalty minutes.

He also has 14 games of playoff experience. In addition to the Americans and Broncos, Schmiemann also spent the 2017-18 season with the Calgary Hitmen.

“With this move to get Dom, we have changed the makeup of our defence,” says Brandon general manager Darren Ritchie.

WHL clubs need to be down to three 20-year old players by the October 10th deadline, meaning Ritchie will need to make another roster decision before Thursday.

The Wheat Kings, who won two of three games this past weekend to improve to 3-4-0 on the season, will return to action Friday night at Westoba Place when the Saskatoon Blades pay a visit to Brandon.

Tickets to Friday’s game, presented by Heritage Co-op, are on sale at the Keystone Centre box office, by calling 204-726-3555 or online at keystonecentre.com.