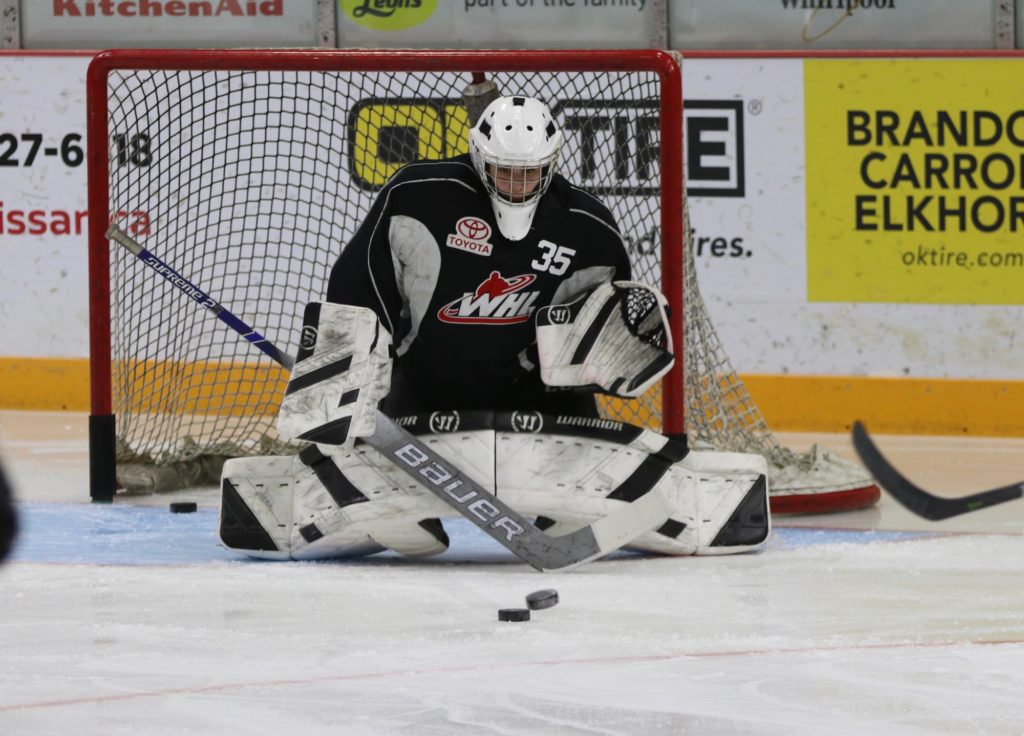 (Courtesy of Perry Bergson, The Brandon Sun) — The Brandon Wheat Kings prospects camp turned out to be a nice chance for four members of Canada’s western entry in the world ball hockey championship to get some training in.

Goalie Cole Plowman, forwards Brett Hyland and Owen Weihs and defenceman Tyler Teasdale will all attend the annual event, which will be held this year in Prague, Czech Republic from June 21 to July 1. All but Hyland are Manitobans who can trace their involvement in the sport to a single team that was formed a couple of years ago as a chance for some buddies to get together and played in the Winnipeg ball hockey league.

“It’s kind of surreal honestly,” Plowman said. “You think of ways that you can represent your country, and ball hockey isn’t one that you think of at the beginning.”

Last year, Seattle Thunderbirds prospect Conner Roulette told them he knew the guy who coached Team Manitoba, so they attended some practices and all made the squad.

“It was mainly just about having fun,” Weihs said. “It wasn’t a very competitive league and then all of a sudden a couple of my friends brought up ‘Hey, what about Team Manitoba ball hockey?’ so we said ‘Why not?’”

At nationals, the Manitoba Grasshoppers tied their first game, and then won twice to finish atop their pool. That propelled them into the final, where they beat Withrow Park 5-2 to become national champs.

“It was really cool,” Plowman said. “We tied our first game, and we were like ‘Oh, OK, this is going to be pretty hard.’ After that we just ran with it and killed it and won, which is super sick. Five or six of our players got asked to play with Team Canada.”

It was Manitoba’s first-ever gold in the event.

Canada will actually send two squads to ball hockey worlds, with one from Western Canada and one from Eastern Canada.

Team Canada West is primarily 2003-born players who either already have or will turn 16 this year, along with one 2004-born player.

The other Manitobans are forwards Dawson Pasternak, whose WHL rights are held by the Portland Winterhawks, Nate Goodbrandson (Everett Silvertips), plus defenceman Rory Neill (Calgary Hitmen).

Teasdale has played the sport for five years, and will patrol the blue-line like he does in ice hockey.

“I’m really excited,” Teasdale said. “It’s my first time ever going to Europe so it should be really fun.”

While ball hockey and ice hockey are offshoots of the same game, the change in playing surface creates some major differences.

“When you skate, you can glide at points too but running is just running,” Weihs said. “If you want to go the other way, you can’t really glide. You have to stop and run back.

For the netminder Plowman, the biggest challenge in switching from playing on ice to cement is lateral movement, because goal pads simply don’t react the same way on a floor. A neat innovation will help with that issue.

“The cool thing is that my coach for Manitoba is actually giving me his pads, which have little plastic balls on the inside so that I can actually slide on concrete, which is super cool,” Plowman said. “Other than that, even in net it’s a lot of cardio.”

He said it was about 40 C in one of the arenas they played in last summer, so heat can be an issue.

The team hasn’t been able to practise since they are spread across Western Canada, so they will meet early in Prague to get some work in together.

Wheat Kings camp gave the three Manitobans the opportunity to touch base with the Albertan, Hyland.

Three years ago, Hyland’s buddy said he liked the sport, which offered some good off-season conditioning. He was also scouted at nationals and earned a spot on the squad.

“For ball hockey not being a big thing and just doing it for the fun, and now I’m going to Europe to play it and I love it,” Hyland said. “It’s fun. It does everything I need for hockey.”

The Edmonton product has also discovered that the crossover aspects of the game, plus the cardio workout of ball hockey, helps his fitness.

“It’s basically just get out there and use your skill and use your speed,” Hyland said. “It really gets your heart rate up and is tiring so it works on your conditioning.”

While the level of competition they’ll face is a bit of an unknown, all four have set high expectations.

“We’re going there to win for sure,” said Plowman, whose father Mark grew up in Brandon and whose grandparents still live here. “We know that the Slovaks will be good because they were in the final last year and they had a ton of 15-year-olds who are in the program this year. That’s our first game, so we know we’re going to have a tough go.”

“We’ve got a lot of good guys on the team,” Teasdale said. “I think we should win gold.”

They’re also excited about the entire opportunity, including the travel.

“It’s going to be really exciting, especially with that group of guys,” Weihs said. “I think we can go down there and make a statement by possibly winning worlds. I hope we do that, and I hope we have a great life experience as well.”

For Hyland, who like the others never could have imagined the opportunity, every bit of it is a grand adventure.

“I can’t say too many kids my age get to go to Europe to play ball hockey,” Hyland said. “That’s going to be so much fun. I can’t wait. I’m just fortunate to be on that team.”