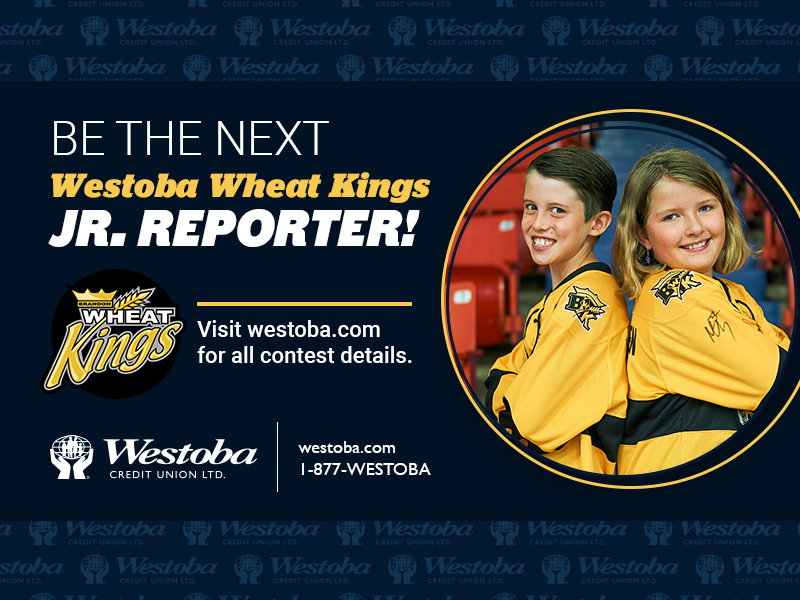 The contest, which is starting on Thursday, September 5th, is open to all Manitoba hockey fansbetween the ages of five to twelve. To enter, Wheat King Fans are encouraged to submit a video of their interviewing skills, showing us why they are the next Westoba Wheat Kings Jr. Reporter!

This contest gives young hockey lovers a chance to enter to win some great prizes, and the opportunity to meet and interview players and staff from the WHL club.

Interviews will be featured on Westoba Credit Union’s YouTube Channel, wheatkings.com, on the Video Scoreboard at several Brandon home games in 2019-20 as well as all over social media!

“The turnout and the reception over the last few years has been incredible. We are so proud of the kids in our communities for showcasing their talents,” says Jim Rediger, Chief Executive Officer of WCU. “Westoba is proud to partner with the Brandon Wheat Kings for the fifth year in a row to bring you the Westoba Wheat Kings Jr. Reporter!”

Contest deadline is Friday, October 18th, 2019. Fans are encouraged to visit westoba.com for more information on the contest, to submit their unique and creative videos and to watch all submissions.

Two winners will be announced in October and make their 2019-20 season debuts early in the season.

“This is one of the most exciting programs that we have been involved in over the last few years,” says Rick Dillabough, Wheat Kings’ Director of Business Operations & Sponsorship. “Last year’s contestants showed us the great talent that we have in western Manitoba, and we’re expecting another great crop of future reporters like Branden Crowe (Q Country/CKLQ Radio) and Perry Bergson (Brandon Sun). What an exciting contest and the list of prizes to be won are pretty impressive.”

Westoba staff will be at Brandon’s pre-season home opener on Friday night and will be accepting audtions / entries. The Wheat Kings will host the Winnipeg ICE at 7:30pm and tickets to the game are on sale now at the Keystone Centre box office.