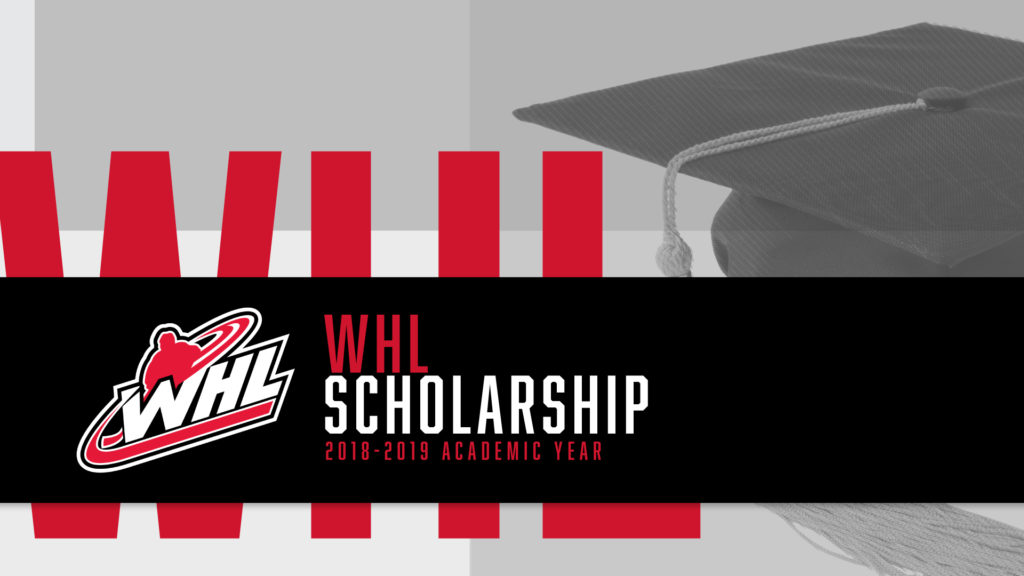 Kelowna, B.C. – The Western Hockey League concluded its Annual General Meeting Wednesday in Kelowna, highlighted with a celebration of 25 years of the WHL Scholarship Program, the return of WHL hockey to Winnipeg, and over $10 million in investments to upgrade WHL Arena Facilities.

Administered by the WHL Office, WHL Scholarships are solely funded by the WHL member Clubs. Every player who plays in the WHL is eligible to receive the WHL Scholarship. For every season a player plays in the WHL, they receive a guaranteed, full-year WHL Scholarship including tuition, textbooks and compulsory fees to a post-secondary institution of their choice. The WHL Scholarship is a fully-guaranteed academic scholarship with no requirement to play university hockey to qualify. The WHL graduate can apply the funding to any post-secondary or career-enhancing program of his choice, including trades schools or professional career training programs.

In addition to the WHL Scholarship players receive upon graduation from the WHL, all current WHL players are encouraged to enroll in post-secondary courses and these courses are also fully-funded by the WHL member Clubs.

With the 101st Memorial Cup hosted in Halifax this past May, the focus shifts west as Kelowna will welcome the 102nd edition of the Memorial Cup from May 22 to 31, 2020. The Memorial Cup returns to Kelowna for the first time since 2004, where the host Rockets claimed the national championship on home ice. Led by Tom Dyas, Chair of the Host Committee for the 2020 Memorial Cup, preparations are already well underway.

Come September 2019, WHL hockey will be played in Winnipeg for the first time since the 1983-84 WHL season. The relocation of the Kootenay ICE from Cranbrook, B.C. was formally announced on January 29, 2019. The WHL Board of Governors was presented with an update on the relocation process as the ICE look forward to opening the 2019-20 WHL Regular Season in the Wayne Fleming Arena, which will undergo $1.2 million in upgrades prior to puck drop.

With the relocation of the ICE to Winnipeg and the WHL’s East Division from Cranbrook and the WHL’s Central Division, the Swift Current Broncos will shift to the Central Division beginning in the 2019-20 WHL Regular Season, joining the Edmonton Oil Kings, Red Deer Rebels, Calgary Hitmen, Lethbridge Hurricanes and Medicine Hat Tigers.

Over $10 Million Invested in Capital Improvements to WHL Arena Facilities

All WHL Arena Facilities across Western Canada and the Pacific Northwest United States will undergo over $10 million in capital improvements prior to the start of the 2019-20 season, including the installation of new NHL-licensed acrylic rinkboard systems, improved video scoreboards, and ugraded lighting standards. The improvements are designed to address player safety and improve the fan experience.

Under the guidance of Kevin Muench, WHL Senior Director, Officiating, and Tom Kowal, WHL Officiating Development Coach, the 2018-19 season saw the introduction of the WHL Western Branches Officiating Development Program. This 11-part series of video training materials was developed by Muench, Kowal and the WHL Officiating department, and provided to the Western Branches of Hockey Canada to serve as an educational tool for officials coming up through the system. This program will continue through the 2019-20 season.

In conjunction with the conclusion of the 2019 WHL Annual General Meeting, the WHL announced its 60-game schedule for the 2019 WHL pre-season, highlighted by games between the Edmonton Oil Kings and Prince George Cougars in Dawson Creek, B.C., as well as four pre-season tournaments to be hosted by the Everett Silvertips, Regina Pats, Tri-City Americans and Vancouver Giants.

The CIBC Canada Russia Series will return to Saskatchewan in 2019 as Saskatoon and Prince Albert prepare for hosting duties November 13 and 14, respectively. The event was last hosted in Saskatchewan in November 2017 when Moose Jaw and Swift Current opened their doors for the annual international faceoff. The 2018 CIBC Canada Russia Series was hosted this past season by Kamloops and Vancouver.

The WHL announced that a WHL Goaltending Development Camp will be held in August and will feature a symposium that will bring together all goaltending coaches from the 22 WHL Clubs. The goaltending camp will also be open to instructional sessions for WHL goaltending prospects. Further details regarding the camp will be announced soon.