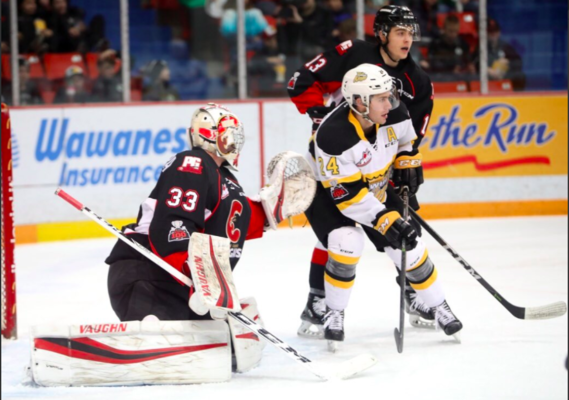 Brandon, MB. – The Brandon Wheat Kings will be hoping to run their season high win streak to seven games Wednesday night when the Prince George Cougars make their first appearance at Westoba Place in two years.

Wednesday’s game will be Brandon’s first since Friday night when they edged the visiting Red Deer Rebels 2-1.

Wednesday is also the third of a 4-game home stand for the Wheat Kings, who host Calgary on Friday night.

Brandon’s recent surge has pushed the Wheat Kings to within striking distance of the Eastern Division leaders.

Entering Tuesday night’s action in the Western Hockey League the Wheat Kings find themselves six points back of both Winnipeg and Prince Albert, with a record of 21-17-1-2.

A key reason for the clubs recent climb in the Eastern Conference standings has been the play of veteran netminder Jiri Patera, who has been the winning goalkeeper in five of the 6 games during the streak. He has stopped 81 of 85 shots in posting wins over Red Deer and Medicine Hat.

The Vegas Golden Knights prospect has only lost twice in regulation since returning from a lower body injury on November 23rd, going 9-2-0-2 during that stretch, to improve his goals against average to 2.54 and his save percentage to .923.

Brandon enters Wednesday night’s game, which will be the first between the two teams since last week’s deadline deal, having not lost in regulation to a B.C. Division club this season.

While Hooker has scored goals in back to back games for the Cougars, Perepeluk’s debut featured a number of big hits against the Rebels.

The Prince George – Brandon transaction was one of two orchestrated by Cougars’ GM / Coach Mark Lamb last week. In the other deal, he sent veteran defenceman Rhett Rhinehart and a third round pick to Saskatoon in exchange for defenceman Majid Kaddoura, the rights to 16-year old Jayden Watson and a first round bantam draft pick.

“Our moves fit into our plan for not only our future but for right now as well,” says Lamb. “Getting another first round selection in what is a very talented 2005-born draft class is what we were striving for.”

Hooker’s Cougars meanwhile will be playing the fifth of a six game Eastern Division road trip on Wednesday.

After opening up the trip last week with a shootout loss in Regina, the Cougars lost to Prince Albert in overtime, before downing the Blades 4-1 in Saskatoon.

Following this week’s home games, the Wheat Kings will travel to Moose Jaw to meet the Warriors on Saturday night, before returning for back to back home games next weekend.

Tickets to Wednesday’s game, presented by Nutrien Ag Solutions, as well as Friday’s Michael Ferland Bobblehead Night – presented by TELUS – are on sale now at the Keystone Centre box office, by calling (204) 726-3555 or online at keystonecentre.com

ABOUT NUTRIEN AG SOLUTIONS: Nutrien is the world’s largest provider of crop inputs and services, playing a critical role in helping growers increase food production in a sustainable manner. We produce and distribute 27 million tons of potash, nitrogen and phosphate products world-wide. We also operate the leading global agriculture retail network, Nutrien Ag Solutions, which provides crop inputs, services and full-acre solutions to growers through our trusted crop consultants at our more than 1,700 locations in North America, South America, and Australia. Nutrien operates with a long-term view and is committed to working with our stakeholders as we address our economic, environmental and social priorities. The scale and diversity of our integrated portfolio provides a stable earnings base, multiple avenues for growth and the opportunity to return capital to shareholders. Growers can now connect with us online at My.NutrienAgSolutions.com to manage their entire operations. Learn more about the how the Ag Retailer of the Future works to lead the field – today and tomorrow – at NutrienAgSolutions.ca.