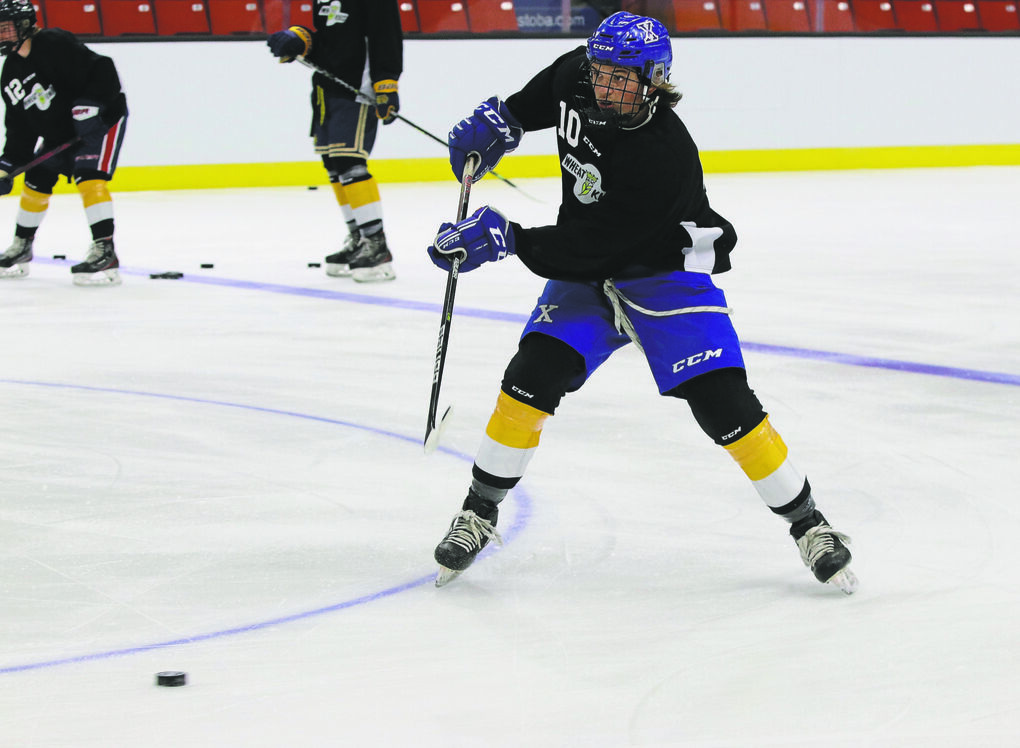 The five-foot-10, 162-pound youngster from Strathcona, Alta., who the Brandon Wheat Kings grabbed in the third round of the 2020 Western Hockey League draft, was an offensive standout through rookie camp. His ability to create and bury chances with his speed was evident as he led Team Black in the three intrasquad games.

“I’m happy with how I played in rookie camp,” Trembecky said prior to his first outing against the veterans on Thursday evening. “I feel like I made a good impression. I’m happy to get things going at main camp.”

The lefty forward has shown a nose for the net throughout his career.

The youngster has spent the last two seasons in the Northern Alberta Xtreme prep program. In 30 games in the Canadian Sport School Hockey League in his draft year, Trembecky scored 22 goals and added 22 assists with 18 penalty minutes.

In just six outings last year, he had three goals and three assists.

“It would have been better to get a full season in but with everything that happened the six games weren’t bad,” Trembecky said.

He quickly discovered that life with the under-18 NAX team was very different than the U15 program. He said that forced him to evolve and improve.

“You have to adjust to the size and the speed of the game and just take your game to the next level as well to match the guys who are bigger and stronger and faster,” Trembecky said.

Part of that evolution was unexpected. Trembecky said his role has shifted on the ice as he tries to find the back of the net more than before, when he saw himself as more of a playmaker.

“I’m just seeing the ice and reading plays, reading and reacting,” Trembecky said. “I feel like I’ve become more of a goalscorer. I was more of a playmaker (before) but I consider more of a scorer now. I’m just doing everything, passing, playmaking and scoring. I’m an all-around guy.”

His goals are to increase his strength and speed to match the players around him, he said.

Trembecky, who began skating at age three, comes by his talent honestly.

His father Jeff spent three years at the University of Alaska-Fairbanks before embarking on a eight-year pro career spent in the ECHL and the Central Hockey League, with several seasons in Europe as well. In his best junior season in 1994-95 with the Chilliwack Chiefs in the B.C. Junior Hockey League, the elder Trembecky, who was a forward, scored 48 goals and put up 109 points in just 60 games.

While he just got the six games in last season, Teydon Trembecky’s improvements haven’t gone unnoticed.

Wheat Kings general manager Doug Gasper had his first real look at the youngster this week since he was drafted 16 months ago, and Trembecky has certainly been impressed.

“Teydon has come in as advertised,” Gasper said. “He makes an impact every time he’s on the ice. We’re very pleased with his progress and where he’s at. He has an edge to his game, he’s a skilled player, he can score in a multitude of ways.

“We’re just very pleased overall with his progress. He’s pushing hard for a spot on this team.”

That’s certainly the impression the teenager has been trying to create.

“I’m just trying to be here and do my best,” Trembecky said. “Obviously I’m trying to make this hockey team but I’m just coming here to work hard and show myself.”

He certainly had to wait to make that impression.

Trembecky chuckled when asked about the 500-day span between getting drafted and finally arriving in Brandon. He wasn’t let down by what was waiting for him.

“The facilities are amazing,” he added.

He certainly hopes to get used to them this season by playing with the Wheat Kings, but if he doesn’t find a spot in Brandon, he hopes to skate with his hometown Whitecourt Wolverines in the Alberta Junior Hockey League.

He has a good sense of what he needs to do to stay.

“I have to compete for pucks, work hard and just have that drive that you want to be here,” Trembecky said. “I want to show myself that I want to be on this team.”