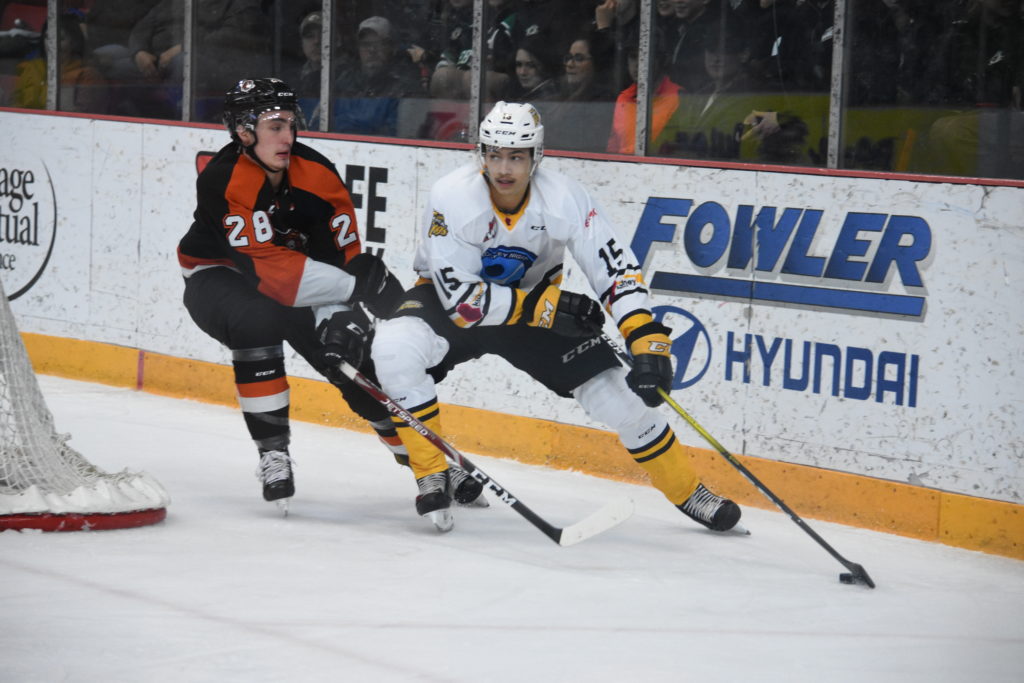 The Medicine Hat Tigers rallied from a 2-0 third period deficit to beat the Wheat Kings 3-2 in overtime.

Brett Kemp scored the game winner at the 18 second mark, capping a furious comeback for the Tigers, who avoided a season series sweep by Brandon.

Trailing 2-0 with just over four minutes remaining in regulation time, the Tigers got on the board when Nick McCarry connected on the powerplay.

Then a defensive breakdown led to the equalizer when James Hamblin scored with just over two minutes to play.

And it was off to overtime.

The Tigers gained possession from the opening face-off and after gaining the zone – Ryan Chyzowski – from behind the net found Kemp in the slot and he made not mistake.

Despite the loss, the Wheat Kings – who are now 27-19-2-3 on the season – finished the year by collecting seven of a possible eight points against the Tigers. Medicine Hat currently occupies second place in the Western Hockey League’s Central Division with a record of 33-15-2-1.

The loss spoiled a big night for Brandon captain Connor Gutenberg, who became only the tenth player in franchise history to play 300 games in a Wheat King sweater.

The 20-year old local product was honored before the game with a highlight video and ovation. As well, Brandon general manager presented him with a special Silver Puck, in recognition of the milestone.

Lynden McCallum and rookie Jake Chiasson scored in a losing cause for Brandon.

The Wheat Kings, who played the game in special Hockey Night in Canada theme jerseys, don’t play again until Wednesday night when they kick off a pivotal home and home series with the Blades in Saskatoon.

The jerseys were auctioned off before and during the game, with close to $10,000 raised for the Kidney Foundation as part of the annual RE/MAX SUITS up for Organ Donations.

Next home game for Brandon is next Friday night against the Blades on “Player Card Giveaway Night”, presented by Guild Insurance and HMS Insurance.

Tickets to the game go back on sale Saturday morning at the Keystone Centre box office, by calling (204) 726-3555 or online at keystonecentre.com