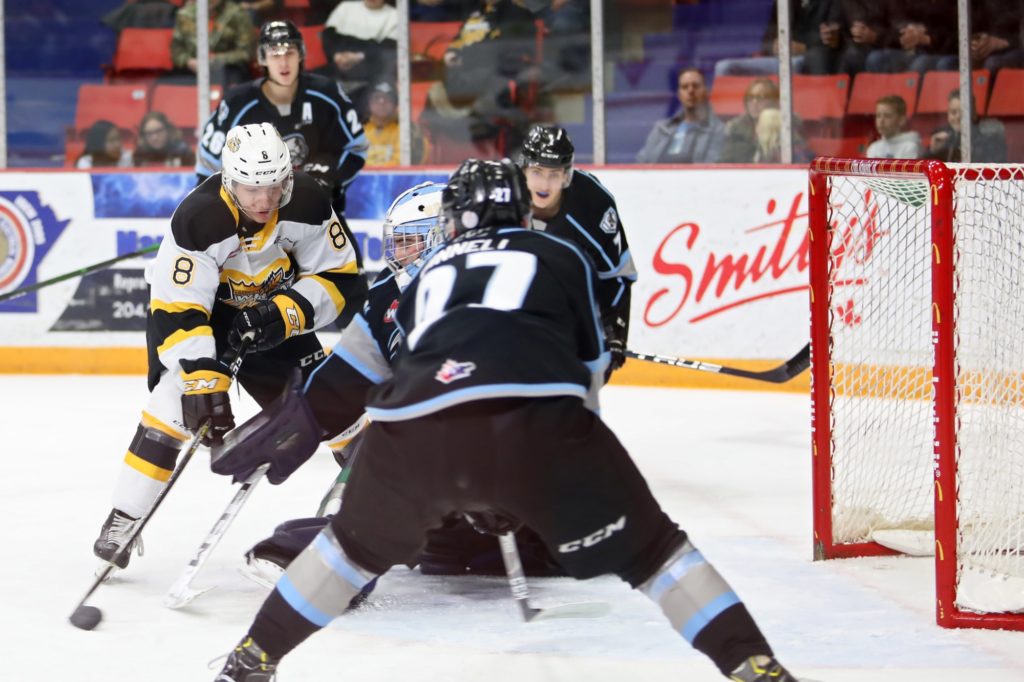 If Ty Thorpe is right, the Brandon Wheat Kings are about to enjoy an excellent Western Hockey League season.

The 18-year-old Brandonite, who is returning to the squad for his third season, said the improvement they showed last year under new head coach Dave Lowry is an excellent launching point.

“We have lots of guys coming back and we’re another year older,” Thorpe said. “We already have a year under our belt with Dave Lowry and we know the systems and everything, and we know what we need from each player. I think we’re going to pick up right where we left off and keep building from day one until playoffs and hopefully make a run at it all.”

Thorpe was originally taken in the third round, 54th overall, of the 2017 WHL bantam draft by the Victoria Royals, and attended their camp after he was selected.

He, along with Wheat Kings teammate Jonny Lambos, were involved in a blockbuster deal on Jan. 10, 2018 when Brandon sent its captain, hometown player Tanner Kaspick, and prospect Cameron MacDonald to Victoria. Along with the two young players, Brandon also received a first-round pick in 2019, which was bundled in a second deal and eventually became prospect Nate Danielson, plus a first-rounder in 2021.

Thorpe should be a key part of any improvement for the team.

After scoring once and adding five assists in 55 games in his rookie season in 2018-19, Thorpe contributed six goals and 12 assists in 60 games in his 17-year-old campaign in 2019-20. He also proved adept in the face-off circle, winning 56.3 per cent of his draws, the only Wheat Kings forward who took at least 100 draws and won more than half.

Part of that success came from feeling more at home on the ice. He usually played centre growing up, so after his rookie season on the wing, it proved to be a good move switching back to his natural position.

With that new confidence, he was intent on using a dishearteningly long off-season off to get better.

“Having this long summer, I’ve been able to train for a lot longer than I normally would,” Thorpe said. “It’s pretty much turned two summers into one. I knew that this year has to be a big year, like every year in junior. You have to keep making strides in your game, so this summer I was really able to reflect on the things and skills I need to improve going forward.

“So far I feel really confident in my game going into next season. I definitely improved a lot over the summer and I’m definitely excited to get started.”

Thorpe spent a lot of time training in the gym, and was able to return to the ice as the summer progressed after it became available at the Keystone Centre. But it might be working in construction with his father all summer that pays off the most.

“I was pouring concrete,” Thorpe said. “It was quite demanding for sure on top of all my training as well but I really enjoyed it. It was good.”

He said the uncertainty about when the season will begin never caused his motivation to waver. Instead, he was determined to use the extra time to his benefit.

“As far as I’ve been concerned, I’ve just been going at it as business as usual and training the same way all summer as if the season was starting on time,” Thorpe said. “That’s the same mindset that I have had going into the fall. I’m going to ramp things up soon and get prepared for whenever we can come back.”

Thorpe said July is usually a big training month and he begins to taper his workouts in early August for training camp. With everything moving back, first to October and later to December, his taper also changed and the hard work continued.

“At this point, I’m training pretty hard, especially because it’s going to be through October and November until we go back,” Thorpe said. “I’m on the ice almost every day and training four days a week as well.”

He has packed on 10 pounds of additional muscle, and now weighs at 187 pounds.

He’s also optimistic about the team. After a 35-22-4-2 season that saw the team play its best hockey after Christmas, Thorpe is optimistic about what lies ahead, in part because of that initial experience with Lowry.

“With a new coach, there are going to be adjustments that have to be made,” Thorpe said. “I think we all understood that and we knew what we were building towards and what we wanted to get to at the end of the year. I think things really started coming together after Christmas break. Everyone could just feel in the room that we were gelling together and things were clicking. Everyone knew their role on the team and everyone was committed to the plan that we needed to execute to have success.

“I was really, really hopeful for the playoffs because our team had really come together and we looked like we would be a real threat to going into the post-season.”

Thorpe said that made it especially hard for he and his teammates to accept when the season was paused and eventually cancelled in May. He was left wondering what might have happened while also feeling badly for the team’s graduating players.

“It was really unfortunate because everyone knew that we were playing really well,” Thorpe said. “We had this belief in the room that we could go somewhere in the playoffs. To have it all end the way it did, I felt especially bad for our 20-year-olds, who didn’t get to finish off their last season, and just every guy in that room who gave it their all throughout the whole year. To have it end in that way was really unfortunate. For the guys coming back this year, it makes us hungrier and more prepared for this upcoming season.”

Thorpe has been on the ice with a group of Wheat Kings including the local players, along with Chad Nychuk, Ben McCartney, Braden Schneider and Ridly Greig. He also skated in Winnipeg at the Iceplex with Duncan Pierce and former Wheat Kings forward Jonny Hooker.

“That’s the nice thing about Brandon,” Thorpe said. “There are always lots of guys who are around and it seems like lots of guys come back in the summers.”

After already spending seven months away from his teammates, Thorpe is understandably excited about coming back in mid-November for a projected start to the season in early December.

“It feels like we haven’t played in two years so all that time that we’ve been stuck here training and just not knowing … once it finally happens I think we’ll hit the ground running and everyone will be even more jacked up to get back at it and play again,” Thorpe said.

Still, a great many unknowns lie ahead for players around the league in regards to how the pandemic will affect their day-to-day life on and off the ice.

Thorpe is philosophical. He expects a very unusual season lies ahead.

“I think that goes without saying,” Thorpe said. “Even right now, not necessarily knowing what those changes are going to be, we all need to be prepared for a different year because it is an unprecedented year. For me, it’s just knowing what you can control and what you can’t control. At the end of the day, for me it comes down to what happens on the ice.

“Everything else will happen how it happens so I’m just worried about what I can control at this point.”