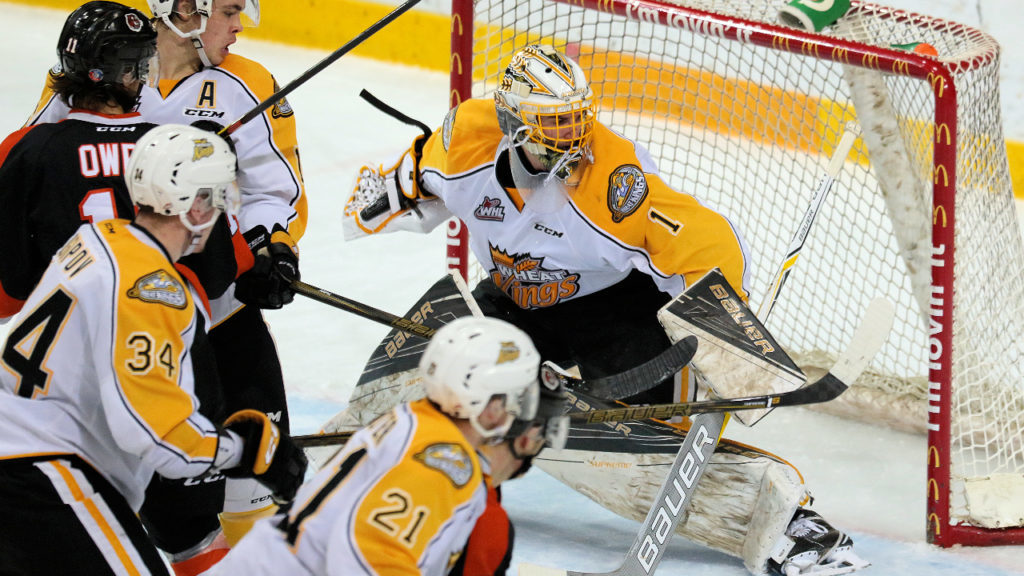 The former Wheat Kings netminder, who spent parts of four seasons with the club from 2014 to 2018, signed a two-year entry level contract with the Vegas Golden Knights on July 13. After Thompson graduated from the WHL, he was replaced as Brandon’s starter by Czech netminder Jiri Patera, who signed with Vegas on June 30.

“Me and Jiri talk quite a bit,” Thompson said. “We worked at (Wheat Kings goaltending coach) Tyler Plante’s goalie school together and we have a really good relationship. I really respect his game. Seeing what he did last year with the Wheat Kings and skating with him a couple of summers ago, he’s going to be a guy who, even though he’s two years younger than me, he’s definitely going to push me and I hope I push him.

“It’s one of those things where ya, we’re both former Wheat Kings and we’re both competing for jobs, but I’m going to support him and knowing Jiri and how good of a guy he is, I know he is going to support me. I’m really looking forward to working with him and hopefully being goaltending partners with him.”

His agent was also negotiating with the Washington Capitals, who Thompson attended development camps with in 2018 and 2019, but he ultimately liked what Vegas provided.

“He was also talking with (Wheat Kings owner and Vegas general manager) Kelly (McCrimmon), and as much as I enjoyed my time in Washington’s organization, the opportunity for me to be a Golden Knight and come out to Vegas, where their AHL team is going to be located, I think it’s a better opportunity if I show well if I’m down the street from the NHL club,” Thompson said. “It’s where I attended my first NHL camp so it’s also the place that I got my first NHL contract.”

He added he knows a lot of people in the organization now, and is a different player than when he first attended their development camp in 2017. But he prefers to handle the situation like he did last time.

“Coming into my first camp here, I don’t think there were a lot of expectations for me,” Thompson said. “I’ve always kind of been an underdog and that’s kind of what I’m going to keep running with, even though people know me here. I’m an undrafted guy, and I guess you could say a little bit of a late bloomer. I’m just going to keep that underdog role and and keep working my way up and scratching and clawing for a spot.”

After leaving Brandon following the 2017-18 season, the undrafted Thompson joined the Brock University Badgers, starting 24 of 28 games, posting a .934 save percentage and a 2.22 goals-against average.

After the university season ended and he was named Ontario University Athletics rookie of the year and top goaltender, he joined the ECHL’s Adirondack Thunder for eight games, and also saw action in a single American Hockey League game with the Binghamton Devils.

He said the experience helped heading into last season.

“I knew what to expect,” Thompson said. “Coming from Brock, I had a good year there. I was wondering if I could play at that level, and after my little stint at Adirondack I knew that I was good enough. I knew it would be a challenge to work my way up and I wanted to apply myself and I knew that to get an NHL contract in my situation, it wasn’t going to be easy coming from school but it’s something I’ve always wanted and dreamed of.”

Thompson enjoyed a terrific season with the South Carolina Stingrays, posting a 2.25 goals-against average and a .929 save percentage in 32 appearances.

“I don’t think I’ve ever had numbers like that personally,” Thompson said. “That was exciting for me, but I was more excited with how good our team was and I was looking forward to a long playoff run. It’s sad we didn’t get that opportunity but I’m happy with how I performed and how things have turned out.”

He said his biggest gains since he left Brandon have actually come off the ice. Now 23, Thompson said he is more mature and has a better understanding of what it takes to succeed at the next level.

“Everyone around you, younger or older, is working just as hard if not harder,” Thompson said. “You have to match that. With my body, I’m treating it well and eating better food and that’s helped my on-ice performance.”

He said he needs to continue getting bigger and stronger in the gym. That may pay off on the ice in an unexpected way.

Last December, the six-foot-three, 180-pound Thompson found himself in a situation he never would have imagined. During a game against the Jacksonville Icemen on Dec. 15, he had skated to his bench for a delayed penalty call to get an extra player on the ice. After the whistle was blown, he was heading back to his net when he was confronted by six-foot-one, 198-pound Icemen netminder Michael McNiven of Winnipeg, who was asking for a fight.

Thompson was nursing a shutout at the time and was more interested in that than fighting, but dropped the gloves anyway.

“He took his gear off and I didn’t really have a choice,” Thompson said. “One thing led to another. I didn’t get hit, and that was my mindset. I’m not a fighter and I’m not the biggest guy, but I just didn’t want to get hit. Luckily I was able to dodge a couple of things and throw a couple of jabs so I’m happy with the way it turned out. I handled myself well but I don’t plan on doing it again.”

He is, however, hoping to repeat the success he had with South Carolina.

After he signed with Vegas, Thompson jumped in his car and drove from Brandon down to Vegas the next day. He said Vegas provided him with the proper paperwork to get through the border, and then it was a matter of making the two-day drive.

“When an NHL team says come out, you’re not going to say no,” Thompson said. “This is a super exciting moment. I don’t have a lot of pressure on me as a guy who hasn’t skated much. I’m just here to get on the ice, get some touches and get comfortable again with the team.”

He’s been on the ice at the team’s practice rink for short 30-minute sessions each of the last three days, and is looking forward to more.

He’s also excited about what the near future will bring.

“Obviously with COVID, no one really knows what’s going to happen next season,” Thompson said. “I’m just super excited, happy, thankful that I got this opportunity. With a two-year deal, I can just relax and play. I’m super thankful for it, it’s a dream come true for me. Obviously the work is just getting started.” 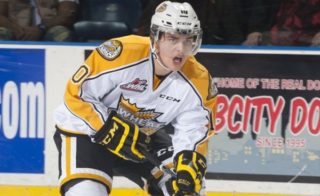