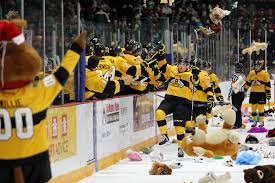 The Wheat Kings will play host to the visiting Moose Jaw Warriors on Friday, December 13th and fans attending the game are being encouraged to bring a new stuffed animal or toque to the game. When Brandon scores its first goal, they can toss them to the ice below.

All stuffed animals and toques will then be donated to the Brandon & Westman Christmas Cheer Registry. As well, cash donations will be accepted.

The Teddy Bear Toss is an annual Christmas tradition that began in Kamloops with the Western Hockey League’s Blazers in 1993. The first Teddy Bear Toss in Brandon was held the following year and has been a big hit ever since. As custom has it, fans are encouraged to bring a teddy bear, toque or set of mittens to their respective club’s designated game. At the scoring of the first goal for the home team, the teddies, toques and mittens will fly.

Since the Wheat Kings Holiday tradition began, over 55,000 stuffed animals have been collected and distributed by the local Christmas Cheer Board.

“This has become a holiday tradition for both the Wheat Kings and Shoppers Mall,” says Wheat Kings director of business operations Rick Dillabough. “As cute as teddy bears are….they bring a smile to everyone’s faces.”

“Having toques tossed on the ice and donated to those in need this holiday season has become extremely valuable to the local Christmas Cheer Registry,” he went on to say.

“Our shopping centre is excited to again team up with the Wheat Kings for this exciting, annual event,” says Shoppers Mall Marketing Director Candace McKenzie. “It is a great initiative for our community and we encourage everyone throughout western Manitoba to make plans to come out for this special and festive game.”

The American Hockey League’s Hershey Bears recently set a new world record by collecting over 46,000, shattering the WHL standard of 29,000, held by the WHL’s Calgary Hitmen.

Friday’s game will be the Wheat Kings final home game before Christmas. Brandon closes out its pre-Christmas schedule with a game in Winnipeg against the Ice on Tuesday, December 17th.

The Wheat Kings do have three additional home games between now and next week’s Teddy Bear Toss:

Tickets to all four pre-Christmas home games are on sale now at the Keystone Centre box office, by calling (204) 726-3555 or online at keystonecentre.com

ABOUT WESTMAN CHRISTMAS CHEER: Mission Statement:  To provide Christmas dinner and gifts for the children, for families in the Westman area who would otherwise go without.In November 1955, The Brandon Council of Women saw a need for a Central Christmas Cheer Registry.  The aim was to prevent the duplication and see that all needy families received assistance.  They set up an office in the St. John Ambulance building.  The Registry office was a clearing house for names only and they did not collect or distribute food or gifts. By the 70’s, the Registry was packing and distributing hampers.   In 2012, The Registry was involved with the distribution of approximately 1,900 hampers in Brandon and the Westman area.  Of these hampers, 950 were packed and delivered from the Registry Office. As per our mission statement, families with children are the main focus for hampers.