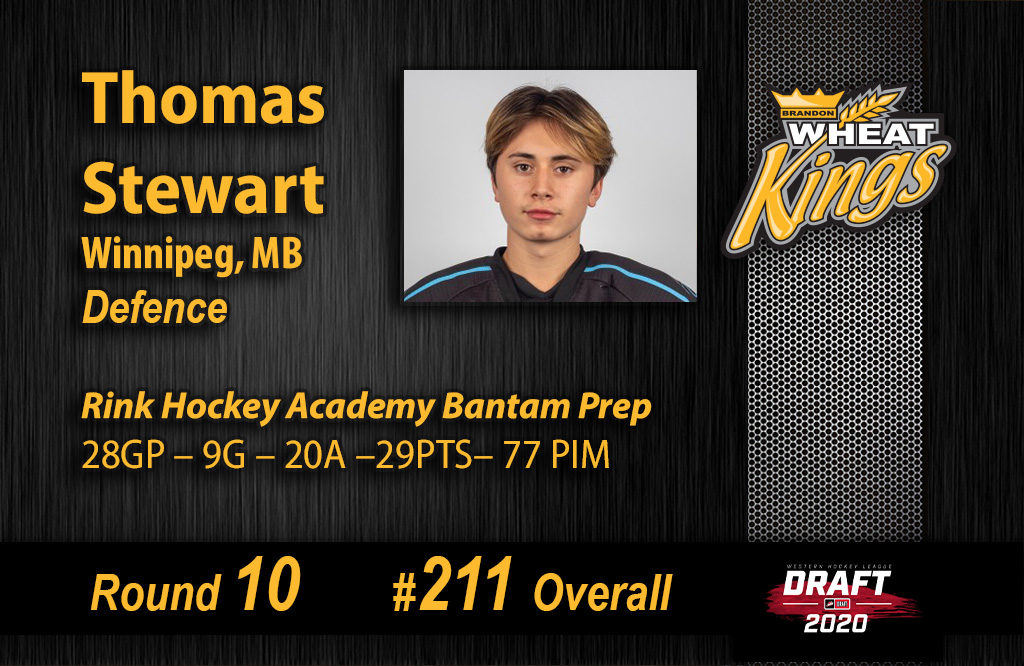 Thomas Stewart would be thrilled to follow in the footsteps of his big brother.

The Brandon Wheat Kings selected the 15-year-old Winnipeg product in the 10th round of the Western Hockey League bantam draft with the 211th overall selection on April 22. That inches him to closer to joining his brother Sam, who is five years older, and just completed his second full season in the WHL, which he split between the Tri-City Americans and the Edmonton Oil Kings.

“I’ve been watching him a lot,” Stewart said. “He’s a guy who I want to model my game after. He sees the ice really well.”

Sam, who is six-foot and weighs 180 pounds, is also a defenceman who has 136 WHL games under his belt. The two brothers have never played with or against each other because of the age gap.

The younger brother is eager to be the next Stewart in the WHL.

“I’ve been wanting to play since he got drafted,” Thomas said.

He said the most noticeable part of his game is his offence.

“I’m a two-way defenceman,” Stewart said. “I can create plays, I can make the simple pass, I can score goals.”

The 15-year-old right-handed shot said he’s always trying to improve aspects of his offensive game to become even more effective.

He started skating and playing hockey at age seven, which makes him a late bloomer by Canadian standards. He said that was by choice.

“My dad put me into house league and that was the first time I was ever on ice,” Stewart said. “He tried to put me in when I was five but I just wasn’t ready for it yet.”

His hard work culminated on April 22 when Brandon grabbed him in the draft. He admitted he was getting nervous by the time he saw his name pop up online.

“I was sitting there with my dad and it was the 10th round and I was getting worried I wasn’t going to get picked,” Stewart said. “I finally saw my name and it was so much relief. I was so excited and so happy that they drafted me.”

There was clearly something Brandon liked about the youngster because they chose him in the 10th round with their 11th pick of the day. It was the first time since 2016 that they picked more than 10 players.

“Thomas is a guy who just does everything well,” Gasper said. “His feet and his mobility are good, he moves that puck, he’s got the ability to join the rush. He’s a good defender as well. We think we’ve got a real good all-around player in Thomas.”

The feelings are definitely mutual.

“I’m glad they drafted me,” Stewart said. “Brandon is basically one of the best places I could have gone to.”

Stewart has played in league games and tournaments in Brandon before so he knows his way around a bit. He likes the idea of potentially suiting up for the Wheat Kings.

“That would be awesome,” Stewart said. “It’s not too far from home, I like the team, I like the organization.”

In these unusual times when Stewart is unable to join his Rink teammates for on- and off-ice workouts, he has instead been using body weights, using the bulk of his own frame to exercise with on online workouts provided by the team.

It’s not new because he enjoys his time in the gym.

“If I’m not playing hockey, I’ll be at the gym working out or playing basketball,” Stewart said.

It’s all part of his long-term plan to join his brother in the WHL. He knows his future lies in his own hands.

“I have to keep practising and keep getting better and show them that I’m worth putting time into and giving other looks at,” Stewart said.