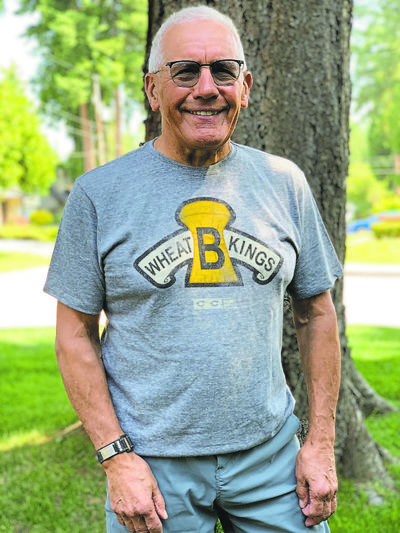 Ron Spratt played his last hockey game in Brandon 53 years ago, but his warm memories of the city haven’t dimmed with age.

Ron Spratt is shown during his time with the Brandon Wheat Kings. (Brandon Sun file photo)

“I’ll never forget the two years in Brandon,” Spratt said. “They were formative years for me. The best years of my hockey career were in Brandon.”

Spratt was born in Moose Jaw but his family moved to North Battleford when he was six. Spratt was the oldest of three children, along with brother Len, who also played hockey, and sister Diane.

Ron first played organized games after the move. The sport had quickly become important to him and his friends.

“Everything was outdoors except for casual skating down at the arena,” Spratt said. “Everything else was on the street and school rinks. My dad used to build a rink for us every year in the backyard.”

With a big group of players his age, hockey became an obsession for Spratt and his friends.

“We played nonstop, especially out on the street because in those days it was so miserably cold,” Spratt said. “We would have 20 kids show up and throw their sticks in the centre, and we’d pick two teams and stay out there until dark.”

After his dad built the rink, they split their time between it and the road.

At an area rink, a caretaker kept the pot-bellied stove warm in the shack, and Spratt and his friends would shovel the ice and then skate.

He became a defenceman early, in large part due to the abundance of talent up front in the community, which was in Boston Bruins territory.

“North Battleford was a hotbed for hockey,” Spratt said. “A lot of professional hockey players came out of that town.”

His parents Ron Sr. and Violet made it all possible. Aside from providing equipment, they also served as frequent chauffeurs.

“They were very supportive,” Spratt said. “We had to travel to all locations — Rosetown, Saskatoon, every small town in the area — and back in those days with the snowstorms, my dad was always there making sure that we got to those games and that we got home safe.”

He played all of his minor hockey in North Battleford until he entered St. Thomas College boy’s school and played with them for three seasons.

They played against other local schools and colleges.

Spratt said junior hockey wasn’t really on his mind growing up. Instead, it was a much higher level.