SOLD OUT DINNER A HUGE SUCCESS 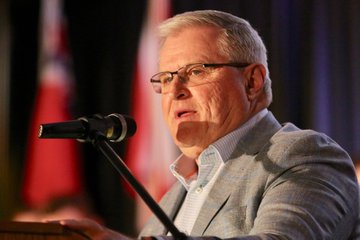 Brandon, MB. – Thursday night was an exciting night at the Keystone Centre as the Brandon Wheat Kings hosted a “sold out” Q Country 91.5 Sportsman’s Dinner, presented by TELUS.

In addition to the dinner, the evening featured both live and silent auctions and among the high bids during the night included special packages from both the Winnipeg Jets and Winnipeg Blue Bombers, signed jerseys from former Wheat Kings Ivan Provorov, Ryan Pulock, Michael Ferland and Brayden Schenn as well as a game worn jersey from Vegas Golden Knights’ right-winger Mark Stone.

Mainline Motors of Virden had the big auction purchase of the night, spending $1,925 for the Jets’ package that included autographed jerseys from Mark Scheifele and Adam Lowry as well as tickets, pre-game dinner and hotel accommodation in Winnipeg.

Brandon Heating and Plumbing outbid a number of interested parties to purchase the Stone jersey, which was worn this past weekend in the game between the Golden Knights and Nashville Predators. The Stone jersey went for $1,775.

The Clear Lake golf package, which included a corporate barbecue from Montanas and a $250 gift certificate from Elkhorn Resort, courtesy of Q Country Radio, went to Keystone Insurance for $1,650 while the Blue Bomber package that included suite tickets, a Canad Inn gift card and autographed jersey was purchased by Sunrise Credit Union for $1,600.

The first Sportsman’s Dinner was held on May 2, 1959, featuring Father Athol Murray, NHL great Bill Mosienko and baseball player Lefty Gomez in the Brandon Armoury. A second one was held a year later, but the dinner was then mothballed for seven years until 1968. It’s been an annual event since.

Since the program began in 1993, the WHL has handed out more than 5,000 scholarships, with more than 300 WHL grads attending post-secondary schools each year.

This year’s dinner was presented by TELUS.

On the ice, the Wheat Kings return to the friendly confines of Westman Place Friday night to host the visiting Medicine Hat Tigers.

Brandon will be taking to the ice Friday in special Hockey Night in Canada theme jerseys, which will be auctioned off before and during the game. All proceeds from the jersey auction will remain in Brandon, supporting the Kidney Foundation of Canada.