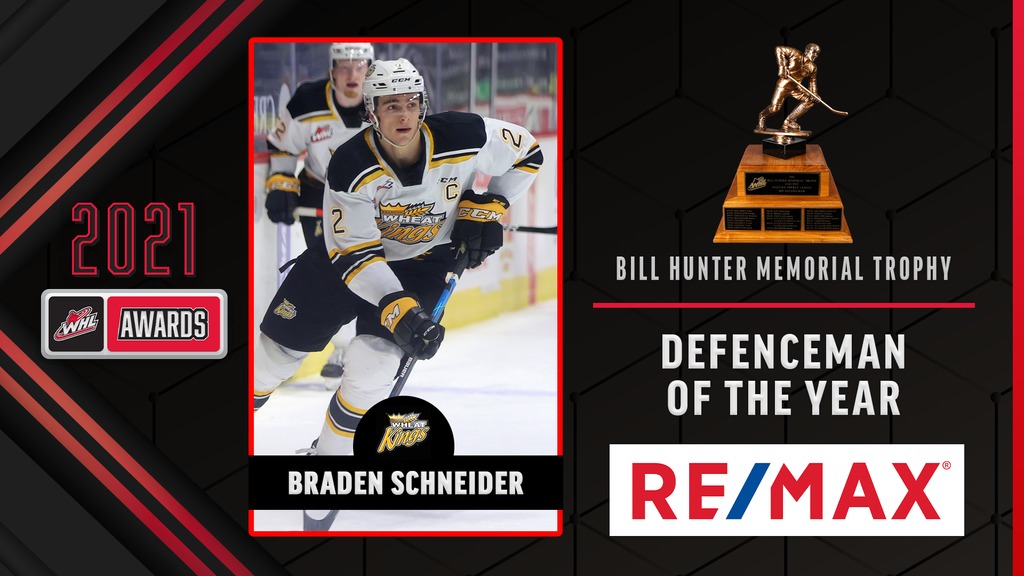 Schneider, a first-round selection of the New York Rangers in the 2020 NHL Draft, led the Wheat Kings to the East Division championship, posting 27 points (5G-22A) during the 2020-21 WHL season. His point total was third-best among WHL blueliners, and the product of Prince Albert, Sask. finished second among WHL defencemen in assists and game-winning goals (two). Schneider’s 15 power-play helpers were second-most among all WHL skaters.

Schneider was also part of the Team Canada squad that captured the gold medal at the 2021 IIHF World Championship in Riga, Latvia. He recorded one assist in nine appearances at the event.

“On behalf of all the REALTORS of RE/MAX of Western Canada, we congratulate Braden Schneider of the Brandon Wheat Kings on this tremendous achievement,” said Elaine Langhout, Director of Regional Advertising for RE/MAX of Western Canada. “We know that your hometown of Prince Albert must be super proud as well and we wish you well on your future hockey journey and wherever life takes you.  Our sincere congrats Braden!”

Schneider was originally selected by the Wheat Kings in the first round, 12th overall, in the 2016 WHL Bantam Draft. He has amassed 115 points (21G-94A) in 207 career WHL regular season games, adding seven more assists in 14 career WHL playoff games. The New York Rangers took the Brandon defenceman with the 19th overall selection in the 2020 NHL Draft.

The Bill Hunter Memorial Trophy recognizes a WHL defenceman who has demonstrated the best all-around ability at his position during the WHL Regular Season.

Born in Saskatoon, Sask., Hunter is honoured for his role in the establishment and sustained success of the WHL. Dedicated and enthusiastic to growing Major Junior hockey, Hunter served as the Owner, General Manager, and Coach of the Edmonton Oil Kings in addition to being a co-founder of the league.

Along with long-time friend, the late Scotty Munro, the pair helped to lead the league’s growth through its formative years.

* Denotes CHL Defenceman of the Year

Regarded as the world’s finest development league for junior hockey players, the Western Hockey League (WHL) head office is based in Calgary, Alberta. The WHL consists of 22 member Clubs with 17 located in Western Canada and five in the U.S. Pacific Northwest. A member of the Canadian Hockey League, the WHL has been a leading supplier of talent for the National Hockey League for over 50 years. The WHL is also the leading provider of hockey scholarships with over 375 graduates each year receiving WHL Scholarships to pursue a post-secondary education of their choice. Each season, WHL players also form the nucleus of Canada’s National Junior Hockey Team.