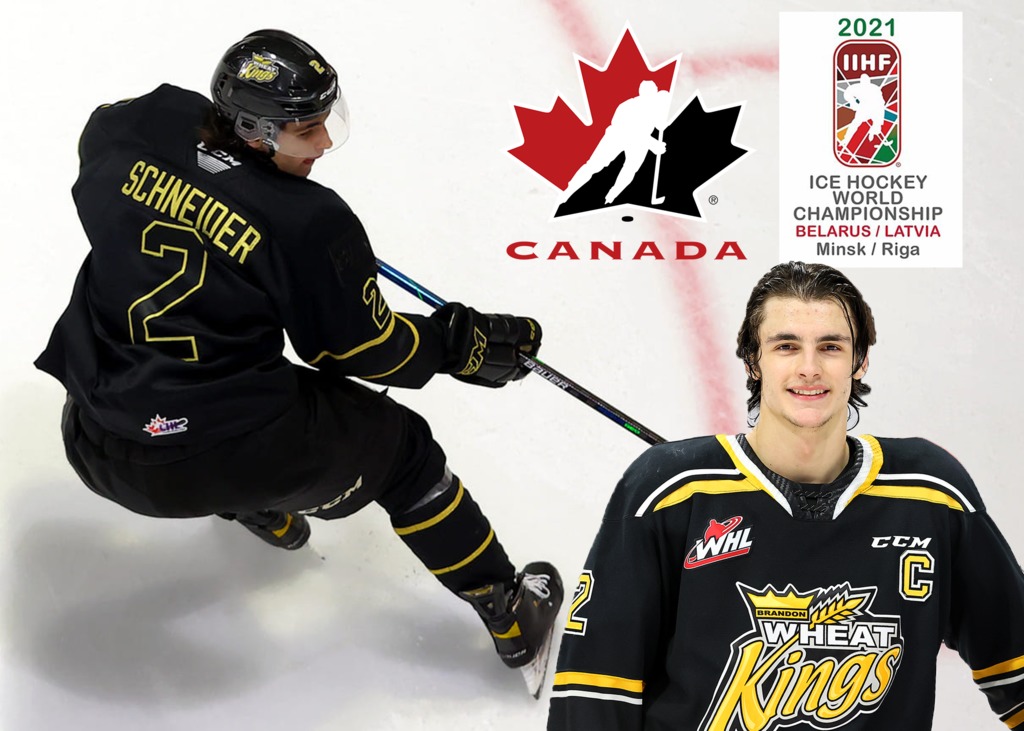 Brandon, MB. – For Brandon defenceman Braden Schneider, his 2020-21 hockey season is far from over.

Hockey Canada announced Friday that the Wheat Kings’ captain has been added to the National Men’s Team roster for the 2021 IIHF World Championship, scheduled for May 21-June 6th in Riga, Latvia.

A first round draft choice (19th overall) of the New York Rangers in last year’s National Hockey League Draft, the 6’2” 209 lb. Prince Albert, Saskatchewan product is coming off an excellent season that saw him score five goals and 27 points in 22 games, in leading Brandon to the Western Hockey League’s Eastern Division Subway HUB Championship in Regina.

Chosen by the Wheat Kings in the first round of the 2016 WHL Bantam Draft, Schneider has scored 115 points, including 21 goals in 207 career WHL games, since joining the club in 2017.

No stranger to International hockey, Schneider has represented Canada on a number of occasions, including this year’s World Junior Championship, where he helped the National Junior team to a silver medal.

With Schneider expected to play next season in the Rangers’ system, the 19-year old blueliner says that this year’s experience will be one that he will cherish for a long time.

“It’s been a whirlwind,” he recently told Perry Bergson of the Brandon Sun. “It feels like yesterday when I was called (at the WHL draft).”

“I was very fortunate to play as much as I did with the Wheat Kings,” he added. “My time in Brandon has really turned me into a good all-around player.”

Brandon coach Don MacGillivray and general manager Doug Gasper could not be happier for Schneiders selection to the National Team.

“Braden has a bright future ahead of him,” says MacGillivray. “He’s a tremendous leader….the Rangers got a good one in him, not only as a player but as a person with what he brings to the ice.”

“Braden’s hard work and continued commitment to improving is game has always been evident and he is very deserving of his many accomplishments,” says Gasper.

“On behalf of the entire Wheat Kings’ organization, I would like to congratulate him on being selected to Team Canada….this is quite the honour for this young man,” he went on to say.

Schneider is one of  eight defenceman chosen to the team, which will feature fourteen forwards and three goalkeepers.

Schneider and Team Canada will open up the 2021 IIHF World Championship on Friday, May 21st against host Latvia, with preliminary round games through Tuesday, June 1st. Canada will also face Italy, Finland, Germany, Kazakhstan, Norway and the United States in the preliminaries before the tournament wraps up with both the gold and bronze medal games on June 6th.