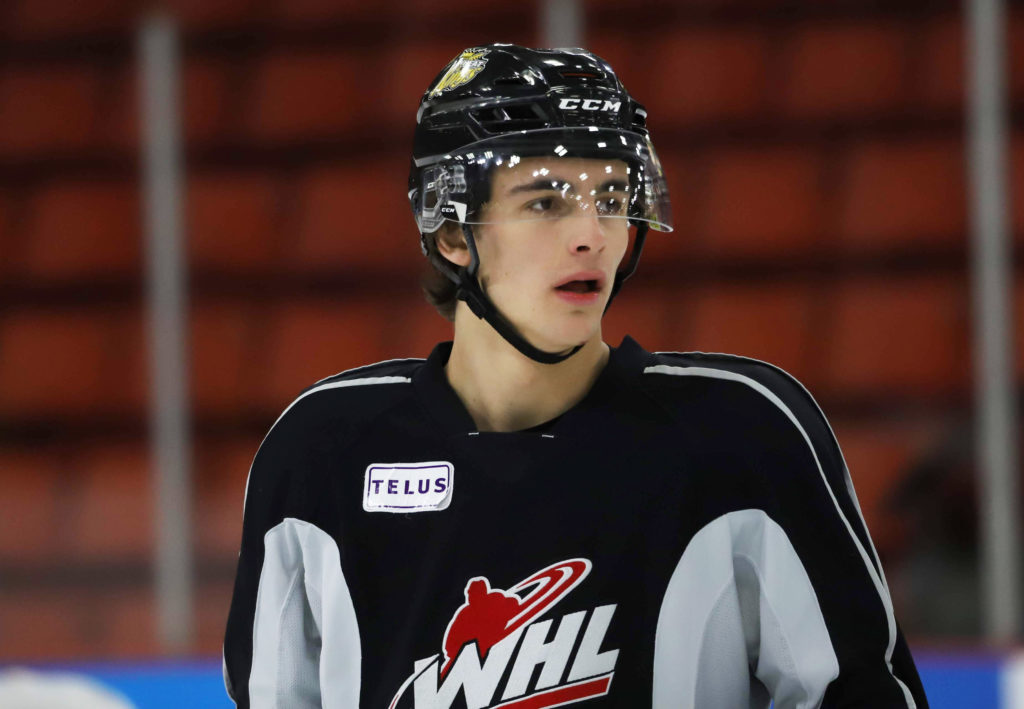 One week before the puck drops in Hamilton, Ont., the pair have been announced as alternate captains for the Canadian Hockey League’s 25th annual showcase of top talent for the 2020 NHL Draft that will feature 40 players from across the Ontario Hockey League, Quebec Major Junior Hockey League, and Western Hockey League going head-to-head on January 16.

A 6-foot-2, 210-pound product of Prince Albert, Sask., Schneider has played a critical part in leading the Wheat Kings this season as an alternate captain. In 38 games, Schneider has recorded 28 points (5G-23A), including two power-play goals, one short-handed goal, and one game-winning goal. The 18-year-old leads all defencemen on the Wheat Kings in scoring and is tied for ninth in WHL defensive scoring. Schneider has been identified as an ‘A’-rated prospect by NHL Central Scouting on their most recent ‘Players to Watch’ List for the 2020 NHL Draft.

Wiesblatt is playing a key offensive role with the defending WHL Champion Raiders. A 5-foot-10, 182-pound product of Calgary, Alta., Wiesblatt ranks second on the Raiders this season with 44 points (17G-27A) through 41 games, including six power-play goals and one game-winning goal. Among all WHL skaters, Wiesblatt is tied 15th in scoring. On the most recent ‘Players to Watch’ list issued by NHL Central Scouting, Wiesblatt was identified as a ‘B’-rated prospect.

The pair represent two of 52 WHL players identified by NHL Central Scouting for the 2020 NHL Draft. Fourteen WHL players will participate in this year’s edition of the annual event.

“It is an honour for me to be named captain of my team for the Top Prospects Game,” Lafreniere said. “I have been looking forward to participating in this event since I started my junior career and I look forward to stepping on the ice next week with all the other great players attending.”

Still standing atop the CHL’s scoring race with 70 points through 32 games, Lafreniere was named World Juniors MVP with 10 points in just five games for Canada. The 18-year-old from Saint-Eustache, Quebec, currently serves as Oceanic captain in the club’s historic 25th season and also wore the ‘C’ for Canada’s gold medal winning Hlinka Gretzky Cup entry in 2018. He was named 2019 CHL Player of the Year and also captured CHL Rookie of the Year honours in 2018 after being the first-overall pick in the 2017 QMJHL Entry Draft.

“It’s definitely a huge honour to be a part of such a great game that includes the best NHL Draft prospects from across the Canadian Hockey League,” Byfield said. “To be named captain of one of the teams is something really special. Lots of great players have been named captain for this game and to know I’m following in their footsteps is huge. It means you are doing something right, and that’s very humbling.”

Byfield currently ranks tied for 12th in CHL scoring with 58 points in just 30 games and returns from the Czech Republic following a World Junior experience in which he recorded one assist over seven games. The 17-year-old from Newmarket, Ontario, was the first-overall pick in the 2018 OHL Priority Selection and went on to earn CHL Rookie of the Year honours a year ago. His leadership resume also includes serving as an alternate captain at the 2018 World Under-17 Hockey Challenge.

O’Rourke, a 17-year-old from Pickering, Ontario, was named Greyhounds captain in November.  This season he’s produced 21 points in 29 games and also competed for Team OHL in the CIBC Canada Russia Series one year after being named a tournament all-star at the World Under-17 Hockey Challenge.

Mercer’s World Junior experience will help Team Red’s leadership group as the Team Canada forward is one of five NHL Draft eligible players to return from the Czech Republic with a gold medal.  The 18-year-old from Bay Roberts, Newfoundland, was an alternate captain for the Drummondville Voltigeurs where he recorded 42 points in 26 games before joining the Sags.

The decade’s list of Top Prospects Game captains includes Dylan Cozens and Kirby Dach in 2019, Ty Smith and Joe Veleno in 2018, Nico Hischier and Nolan Patrick in 2017, Jakob Chychrun and Matthew Tkachuk in 2016, Anthony Beauvillier and Connor McDavid in 2015, Aaron Eklbad and Sam Reinhart in 2014, Seth Jones and Nathan MacKinnon in 2013, Ryan Murray and Colton Sissons in 2012, Sean Couturier and Ryan Nugent-Hopkins in 2011, with Taylor Hall and Tyler Seguin in 2010.

The 2020 Kubota CHL/NHL Top Prospects Game is proudly supported by new title partner Kubota Canada, and CHL associate partners CIBC, Kia Canada, and Cooper Tires.  The game will be broadcast live across Canada on Sportsnet and TVA Sports, and in the United States on NHL Network.