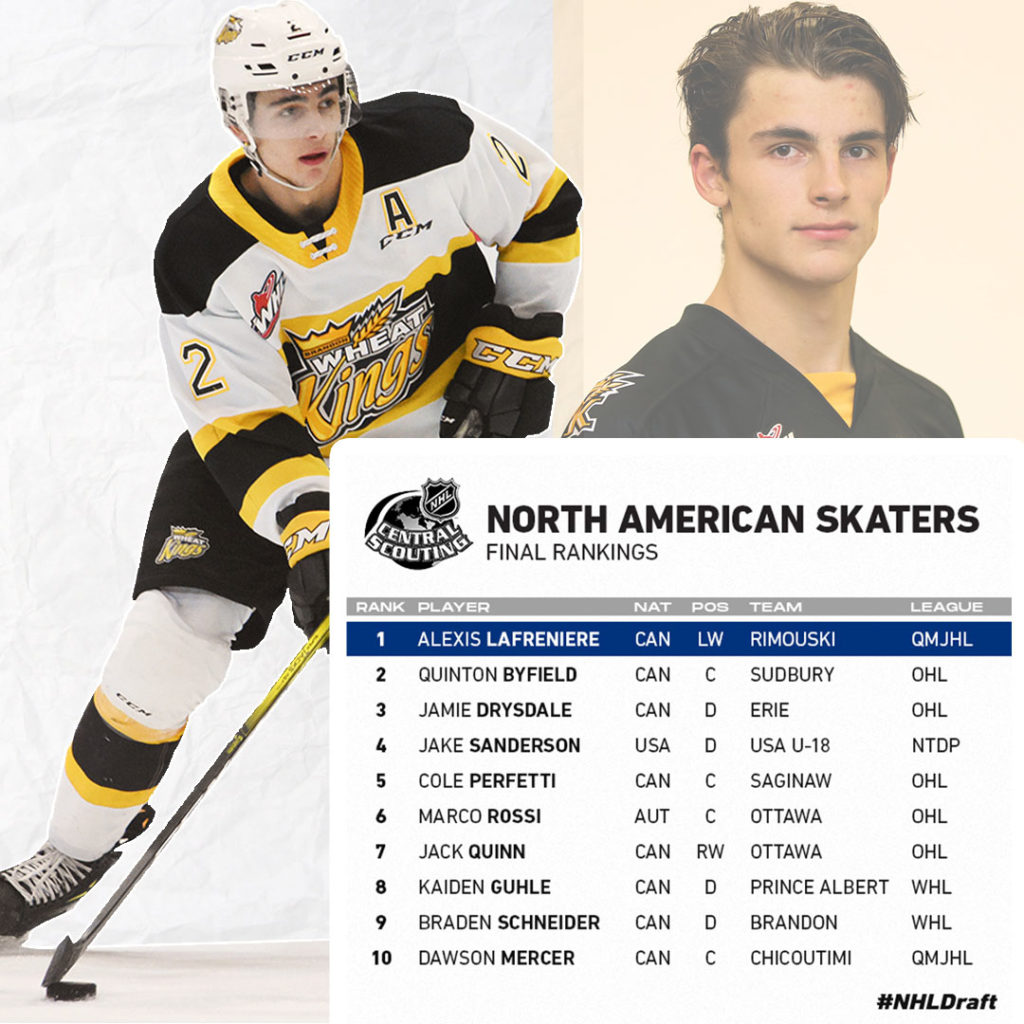 NHL Central Scouting released their final rankings before the 2020 NHL Draft on Wednesday and to little surprise, it included three Brandon Wheat Kings that had been on NHL scouts’ radars all season.

Originally slated for July 2020 in Montreal, the time and place of this year’s NHL Draft still remains in question due to the global outbreak of COVID-19.

Leading the three Wheat Kings on the rankings is 6’2”, 209 lbs. defenceman Braden Schneider (Prince Albert, Sk) who ranks 9th among all North American skaters and whose stock has been no secret since being drafted 12th overall in the first round of the 2016 WHL Bantam Draft by the Wheat Kings. In his third season and his second as an assistant captain with the club, Schneider accrued 42 points (7G, 35A) and 42 penalty minutes in 60 games during the shortened 2019-2020 campaign. Schneider also boasted a 9 +/- on the season and was consistently the strongest and most physically gifted player on the ice, making his presence felt and being a top shutdown d-man in the league. Wednesday’s Draft Ranking comes just a day after Schneider was named a WHL First Team Eastern Conference All Star alongside fellow Wheat King goaltender, Jiri Patera. For the second year in a row, Schneider was recognized by the Wheat Kings at season’s end with the Brad McCrimmon Award for the club’s Top Defenceman. He also was the recipient of the Mike Adamski Award for the team’s Hardest Working Player.

Schneider’s 9th place ranking on the North American Skaters list is the second highest among all other WHL players, just one spot behind Prince Albert Raider Kaiden Guhle. 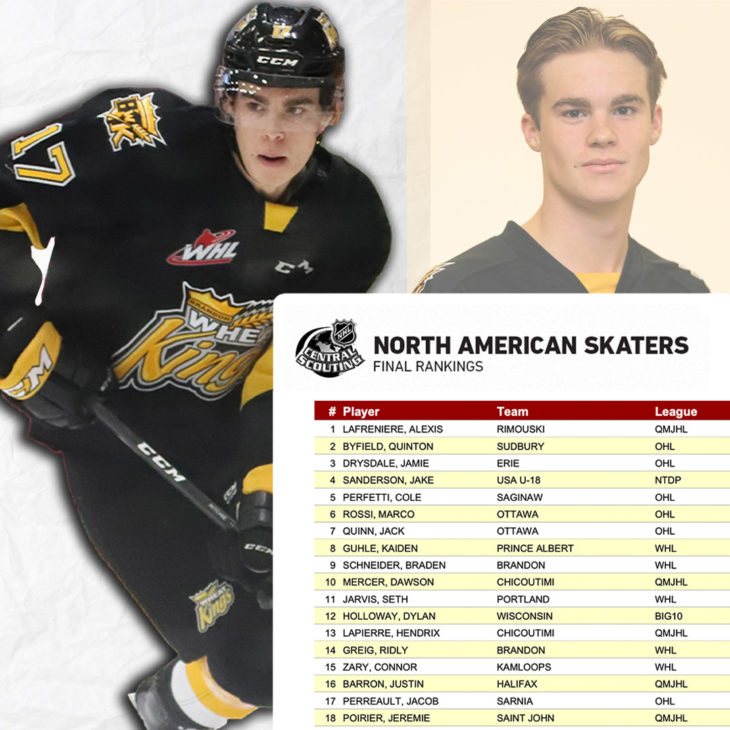 The next Wheat King to crack the 2020 NHL Central Scouting North American Skaters list is 5’11”, 159 lbs. forward Ridly Greig (Lethbridge, Ab) who comes in at 14th, just five spots behind Schneider. Selected by the Wheat Kings 8th overall in the 2017 Bantam Draft, Greig had continued success this season as one of the club’s most potent offensive weapons. In 56 games played, Greig notched 60 points (26G, 34A) and 83 penalty minutes to go along with a +/- of 11. It was a significant improvement for Greig who had finished his first season in the WHL in 2018-19 with 35 points.

A number of the names on this year’s Central Scouting list from Canada will be familiar to Greig as he skated alongside them for Team Canada in the U18 Hlinka Gretzky Cup in the summer of 2019. Players such as the Sudbury Wolves’ Quinton Byfield and Saginaw Spirit’s Cole Perfetti are ranked in the top 5 of Wednesday’s list. 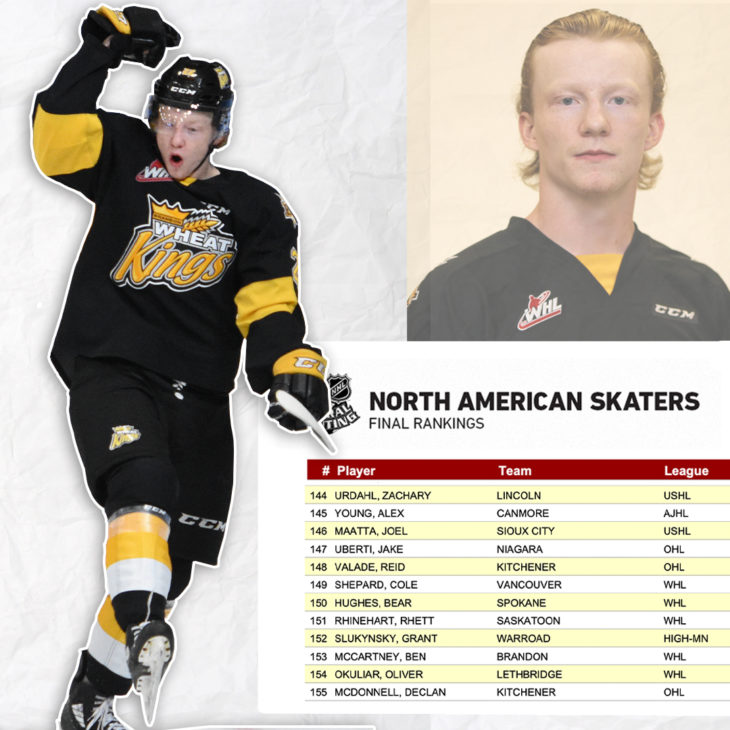 The final Wheat King to make this year’s Central Scouting list of North American Skaters is 6’, 185 lbs. forward Ben McCartney (Macdonald, MB) who came in at 153rd. In his third full season with the Wheaties, McCartney showed a considerable jump in production between his last season and 2019-20 finishing with 61 points (25G, 36A) in 61 games and 105 penalty minutes, the second-most penalty minutes the WHL. This was 20 more points for McCartney than last season who had a +/- of 8 to go along with his improved season. The last time McCartney had more than 50 points in a season was in 2016-17 for the Okanagan Hockey Academy of the CSSHL when he scored 51 in 29 games. 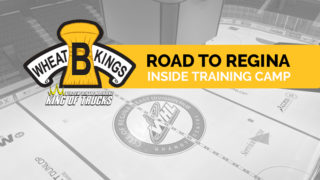 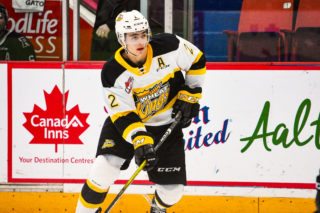 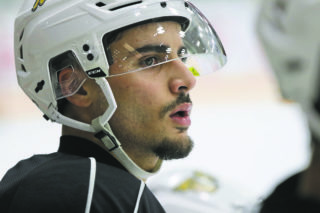