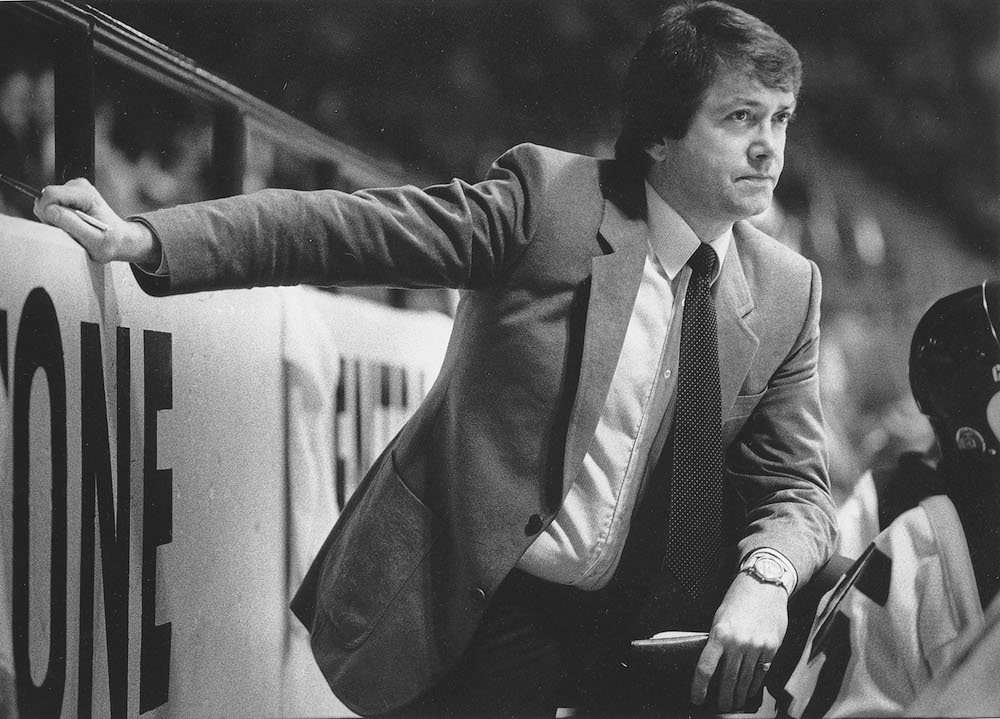 Jack Sangster had a lot of adventures as the coach of the Brandon Wheat Kings in the 1980s, but none of them involved trading a player for a bus like he did with the Seattle Breakers.

Tom Martin, a Victoria product, was on Seattle’s list but had chosen to attend the University of Denver instead. When Sangster talked to him, he said he would never report.

Former Brandon Wheat Kings head coach Jack Sangster is shown in a recent photo. The colourful Sangster suffered a stroke 18 months ago that had a profound impact on his health.

The Victoria Cougars, meanwhile, had purchased a team bus from the Spokane Flyers after they suspended operations. It was sitting in the United States, however, because the team didn’t want to pay the duties and other fees to get it into Canada.

At the same time, Seattle’s bus had blown its engine.

After a game in Victoria, Sangster was sitting in Cougars general manager J. Fraser McColl’s office and jokingly suggested the trade.

“I said ‘How about it, let’s trade for the bus,” Sangster said. “He laughed and I laughed. He thought it was a big joke. Going back after the game on the ferry, I thought ‘Why not? This is stupid. The kid’s not doing anything, the bus is not doing anything, we have to do something.’ Our bus scared me. I would sleep with one eye open so I phoned when we got back to Seattle and he said ‘You’re kidding me.’ I said ‘No, I’m not kidding.’”

McColl said he would have to speak to the owner about it and he would get back to Sangster.

On Jan. 19, 1983, the trade was consummated. It was left to Western Hockey League president Ed Chynoweth to break the news.

While Chynoweth wasn’t happy, Sangster was quick to respond that the Breakers needed the publicity.

Sangster was right. His many media appearances included a spot on Good Morning America.

As for the bus?

“They were still using it when I left there,” Sangster said. “It had 18 bunks, 22 seats and a big washroom. It was great.”

Sangster, 73, was born in Saskatchewan but grew up in Flin Flon and Thompson, coached the Wheat Kings from 1983 to 1986.

The Thompson Reds senior AA baseball team is named after his father Red (Alexander) Sangster, a member of the Manitoba Baseball Hall of Fame. Along with his mother Mary, his parents encouraged and supported his sports.

“My mother used to take me to my games every Saturday morning at the Whitney Forum in Flin Flon,” Sangster said. “It was between that and playing the trumpet. I decided on playing hockey.”

Sangster tried out for his hometown Flin Flon Bombers a couple of times but never made it. At age 18 in the mid-1960s, his hockey career took a decidedly different direction after the family had moved to Thompson.

The president of the minor hockey association called him to see if he would help out with a midget team whose coach was going into the hospital. Sangster, who had helped at practice a couple of times, wasn’t much older than players and they were his friends.

The president reassured him he would have a helper and all he had to do was change the lines. After three practices, his midget team faced an older juvenile squad from Winnipeg.

“Lo and behold, we beat them both games,” Sangster said. “I kind of liked the feeling.”

Sangster told his father that he enjoyed coaching but didn’t really know much about it. His dad encouraged him to attend some hockey schools.

“I talked to a lot of people and asked a lot of questions,” Sangster said.