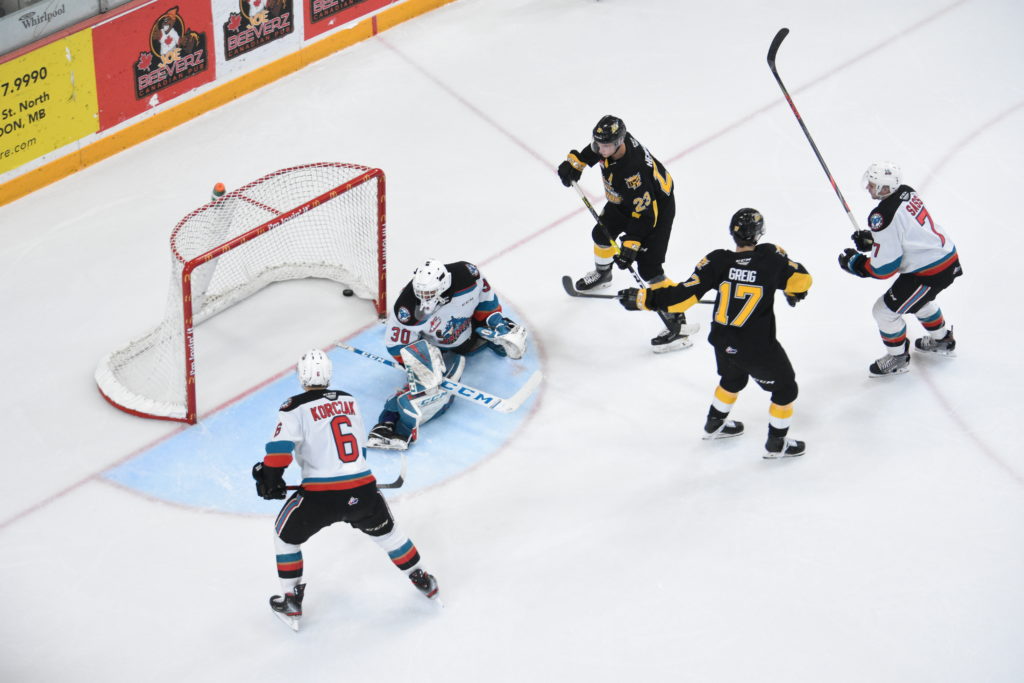 Brandon, MB. – Back to back overtime shootout losses for the Brandon Wheat Kings.

After dropping a disappointing 5-4 decision to the B.C. Division leading Kamloops Blazers on Friday night, the Wheat Kings fell 2-1 to the Memorial Cup Host Kelowna Rockets on Tuesday night.

The Wheat Kings were the better team in this one, outshooting the Rockets 34-24 and carrying the play for most of the night.

With the score tied at one in overtime, Brandon’s Chad Nychuk and Cole Reinhardt had excellent chances to finish it but missed the net – on a rebound Nychuk ifted the puck up over Kelowna goalkeeper Roman Basran but it missed by an inch. Then moments later, Reinhardt rifled a shot wide of the target.

Then it was off to the shootout where the first five shooters came up dry before the Rockets’ Matthew Wedman beat Brandon netminder Jiri Patera up high stick side for the win.

Ridly Greig scored Brandon’s lone goal – tying the game four minutes into the second period. Wedman meanwhile was the only Rocket to beat Patera on this night, cashing in on a first period powerplay.

“I thought we were good,” he told Perry Bergson of the Brandon Sun. “I thought all four lines were good offensively and defensively. Luck wasn’t in our favour.”

Kelowna finished the night 1 for 4 with the man advantage while the Wheat Kings went 1 for 3.

With the shootout loss, the Wheat Kings record slips to 13-15-1-2. However, despite the setback, Brandon has collected at least a point in seven of its last 8 home games.

The Wheat Kings, who featured two new players on Tuesday, will now close out their 4-game home stand Friday night against the visiting Moose Jaw Warriors.

“He’s going to be a very good player,” says the Brandon coach. “He does a lot of good things.”

Fans are encouraged to bring stuffed animals and when the Wheat Kings score their first goal, they can litter the ice below.

Tickets to Friday night’s game – the Wheat Kings final home game before Christmas – are on sale at the Keystone Centre box office, by calling (204) 726-3555 or online at keystonecentre.com.